Four out of five Polish voters casting ballots in Sunday’s first-round presidential election were holding their noses. But what they want to say won’t be clear until the second round on May 24; maybe not until the parliamentary election in six months’ time. What is already clear is that the Poles have not been persuaded into voting for a candidate promising to go to war in the Ukraine or on the Russian border. Two displays of American military force in Poland – the armoured column which crossed the country at the end of March, and the portcall of the US Navy destroyer, USS Jason Dunham, at Gdynia last week, backfired by increasing voter insecurity and spreading protest.

Bronisław Komorowski, the incumbent president representing the Civic Platform (PO) party, won 33.77%. He lost to Andrzej Duda (centre) of the Law and Justice party (PiS), with 34.76%. They must repeat the contest on Sunday week. Prime Minister Ewa Kopacz, representing a parliamentary majority for PiS, is also the loser from the size of the anti-CO vote, and from the reluctance of the Poles to vote at all.

The turnout figure was as much of a surprise as Komorowski’s defeat. Just 49.4% of registered voters cast ballots; this is significantly lower than in Polish presidential elections for the past twenty years. It is also one of the lowest turnout results in the entire western alliance. The Pew Research Center in Philadelphia reported on May 5 this comparison of turnout rates for the most recent elections on record. 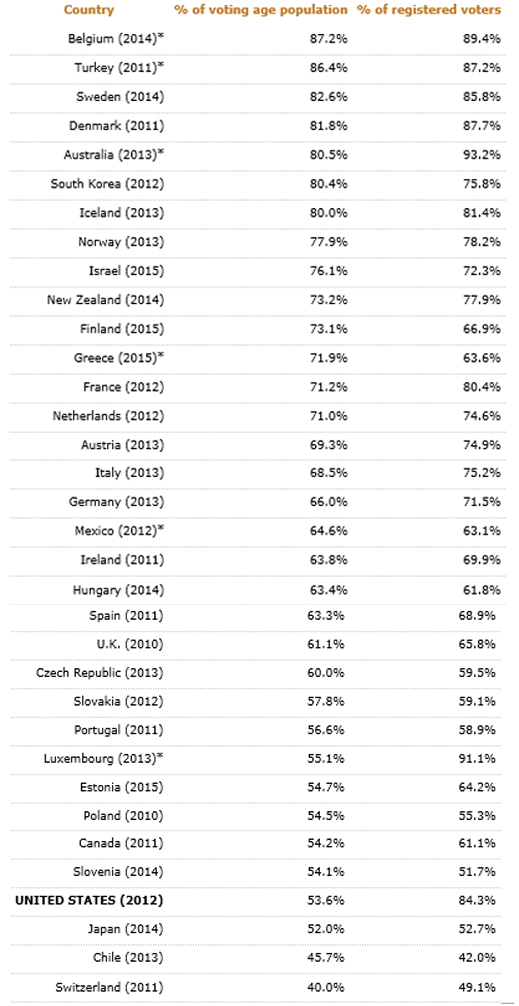 Among the runners-up and also-rans in Sunday’s Polish election, Paweł Kukiz, a former pop singer, won 20.8%. Three others, who have been considered in Moscow to be relatively pro-Russian and against sanctions, drew a total of 7.5%.

The consensus of Polish political analysts is that Komorowski lost the vote by a display of personal arrogance on television and campaign stupidity on the ground. According to Warsaw academic, Radoslaw Markowski, voters have punished Komorowski rather than favoured Duda. Before the balloting began, Markowski had taken sides against Duda, warning that he was making promises that “would even ruin the (much larger) German budget!”

Komorowski has been trying to eat humble pie on Polish television this week after his campaign director reported the president was violently angry at Sunday’s result. The Polish daily Wyborcza had wanted to make Komorowski its ‘Man of the Year 2015’ during a ceremony planned for this Friday, May 15. The paper has now announced the event will be “postponed for a later date”. Wyborcza is not a pro-Russian newspaper. Its selection for last year’s Man of the Year was Mikhail Khodorkovsky.

The Sunday vote is a disaster for Siklebaum; that’s Mr and Mrs Sikorski. Radosław Sikorski, the ex-Polish foreign minister, who is currently the PO party’s speaker of the Sejm (parliament), has been one of the loudest advocates of Polish military support for Kiev and US and NATO force reinforcements in Poland; but he has been losing domestic voter support. For that story, read this. The election outcome for Komorowski, and the threat to the PO’s majority in parliament, have diminished Sikorski’s survival chances even further.

Sikorski’s wife, Anne Applebaum, missed the shift in Polish support against her and her husband’s position entirely. On Sunday she tweeted that turnout was running in her favour. “Huge queue to vote in Polish presidential elections at London embassy. Looks like an hour wait.”

One of Sikorski’s speechwriters, Charles Crawford, is a former UK ambassador to Warsaw and advisor to the security services on what he calls“senior operational experience in the diplomatic and policy aspects of the post-Cold War transition process in Russia.” This week he demonstrated how out of touch he is. “The good news just keeps rolling in,” he tweeted at first on Sunday. “The #Polish post-communist left party SLD has crashed to 2.4% of the vote!”. Then he added this advertisement for his consulting expertise: “Haha never believe opinion polls.”

Russian analysts in Mosow are reticent in interpreting the Polish vote outcome. Vadim Trukhachev, a Central European affairs expert at the Russian State Humanitarian University in Moscow, comments that even if the immediate result may have surprised the west, the outcome isn’t in doubt: “Poland has always been the most anti-Russian country in Central Europe, and that is confirmed by the current voter choice. If Komorowski wins [the second round], from the point of view of relations with Russia everything will remain the same. If Duda wins, then the relationship will only become worse.” According to Yury Kvashnin, head of European Union studies at the Institute of World Economy and International Relations in Moscow (IMEMO), for Russia Komorowski is “not the worst option.”

Komorowski alienated domestic voters with television performances like this one. Having difficulty with a reporter’s question, in front of live and television audience he said: “I refuse to cooperate with you”. Watch the full interview, and listen carefully around minute 2:00.

In the less inhibited internet media, screen shots of Komorowski’s public displays were turned into caricatures of Poland’s worst enemy: 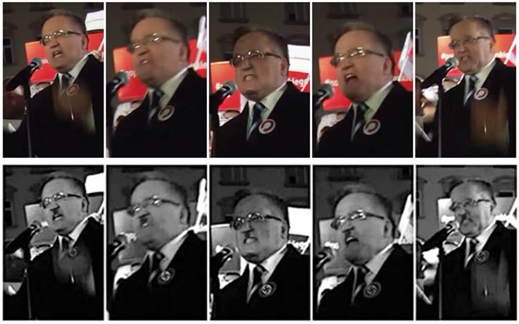 A technical analysis of Polish voter turnout, reported in 2012, confirms that sitting and waiting is a type of protest, but with significant differences between Poland’s regions. According to Mariusz Mazurkiewicz, in 2010 three times the number of voters who sat out the first presidential round voted for the second-place getter in the second round than for the first-place getter.

In the Polish diaspora there is still the conviction that Komorowski represents “rational Poland”, Duda “radical Poland”, and that Komorowski will win. The difference between the two, according to Aleks Szczerbiak, Professor of Politics at the University of Sussex, has little to do with the Ukraine conflict or the military threat which the Sikorski couple have been whipping up in the London and Washington press.

There is no reliable forecast for the outcome this time, according to Polish analyst Stanislas Balcerac. He points out that the electoral map is split geographically between the east, which went for Duda, and the west for Komorowski. 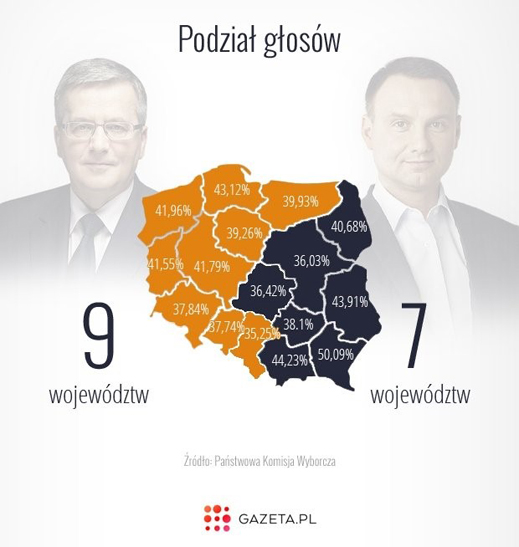 According to Balcerac, “the regions voting for Duda are more or less the regions making up Poland as it was before September 1939. The regions voting for Komorowski are more or less those areas gained after the war and populated by diverse populations. They are relatively rootless as they were moved there more or less by force from what used to be Polish Ukraine and elsewhere. Warsaw votes rather for Komorowski,” Balcerac adds. “No wonder, with all those civil servants there living off the taxpayers’ money. Duda is from the regions, from Krakow. People there are tired of the old nomenklatura, which helps itself and gets in the way of everything.”

Balcerac points out that although Duda started the campaign on an aggressively military note, he changed his tune as voter sentiment became clearer to him. “Duda was pro-Maidan in the past. But this winter he modified his stance. In February he said the NATO alliance was manipulating both Ukraine and Poland, and playing Warsaw in the same way as it was Kiev. On March 20 Duda said that Poland should not send arms to Ukraine. If Poland did, he said the arms ‘would shoot [Poland] itself in the knee.’”

In the run-up to Sunday’s vote, US military displays in Poland, and the announcement of a $5 billion price-tag for Polish government procurement of the Patriot missile system, have failed to win votes. The “Dragoon Ride”, a US armoured column accompanied by helicopters, crossed Poland from northeast to southwest, on March 29 and 30. Read more here.

Between May 8 and 11, the US Navy’s missile destroyer, USS Jason Dunham, was docked at Gdynia port, and Komorowski went on board to give a speech on Friday. In an election endorsement, the Dunham’s commanding officer announced: “I am extremely glad we were able to take advantage of these opportunities, especially hosting President Komorowski aboard. Extending the diplomatic arm of the United States to forge these strong bonds with our allies is one of the most honorable and enjoyable facets of naval service.”

Voter turnout was several points higher in Gdynia than the national average. But Balcerac says this reflects local loyalties and PO party patronage, not US influence. “The 3-city area of Gdynia, Sopot and Gdansk is the cradle of the current governing party. [Former prime minister Donald] Tusk lives in Sopot, and many other party bigwigs live in these three neighbouring towns.” The US Navy effect “was neutral on the existing or already decided voting preferences.”

The view from Moscow, according to Trukhachev, is that Sunday’s results “were expected. Into the second round go Komorowski, the man showing us some sympathy, and Mr Duda, the frank Russophobe. The results correlate well with the attitude of Poles towards Russia. All the polls show the threat from the Russian side is believed by about 80% of Poles. In addition, Paweł Kukiz, who finished third , also doesn’t have a special love towards Russia, but on the other hand, during the election campaign he was strongly opposed to the legitimization of [Ukrainian fascist Stepan] Bandera in Ukraine.”

Speaking about the future for Russian-Polish relations, Kvashnin of IMEMO says: “In 2010, relations between Russia and Poland were very tense, especially after that memorable plane crash. And with the advent of Komorowski [relations] normalized and were relatively normal, so to speak, up to the events in Ukraine. I believe it is still possible to find a common language, but everything very much will depend on how the Ukrainian crisis develops.”

“My personal feeling,” responds Balcerac, “is that Russian analysis of Poland is outdated. Old allies were partially bought off with dollars…Other presumed allies like [Janusz] Korwin-Mikke and [Janusz] Palikot are nut cases, cabaret artists. Not much loss there. The future of Polish foreign relations must be based on a rational assessment of whether Poland wants to see bloodshed in Europe in the name of a few Ukrainian oligarchs wanting to consolidate their power. Now that the European Union funds are slowly drying up and the employment level does not go up — with 3 million Poles working abroad — Komorowski hasn’t much to offer except for ‘continuity’ – that’s five more years of the same old story. Many people want some hope in Poland without being forced to be migrant workers in the UK to survive. Duda is young and dynamic. New face, new hopes.”