By Dirk Schoenmaker, Dean of the Duisenberg School of Finance and Professor of Finance, Banking and Insurance at the VU University Amsterdam. Originally published at VoxEU.

In an unusual call for regulation, CEOs of major financial institutions urged action on the asset bubble fear earlier this week (World Economic Forum 2015). They ask for a concerted macroprudential approach that addresses potential asset bubbles fuelled by current low interest rates. Without such a concerted approach, finance just moves to the least regulated segments of the financial system. Peter Wierts and I fully agree with their analysis.

There are various financial accelerator or amplification mechanisms at work in the financial system. The basic mechanism is that debt financing (‘leverage’) is increased to maximise profits during good times, when asset values (‘collateral’) are high and measured risk is low. A first example is banks, which expand their business with high levels of debt during good times (Adrian and Shin 2010). Another example is housing finance, where increasingly large mortgages are granted during a housing boom (Almeida et al. 2006). Finally, financial markets can also be pro-cyclical when ‘haircuts’ for securities financing transactions are reduced in good times (Brunnermeier and Pedersen 2009).

Financial institutions do not internalise the second round effects of debt-based finance on prices (leading to asset price bubbles) and quantities (leading to resource misalignments). It leads to an excessive pro-cyclical effect – as measured by the financial cycle – and externalities that form the main justification for macroprudential policy interventions. Different measures have therefore been proposed or implemented such as the countercyclical capital buffer and a leverage ratio (for banks), maximum loan-to-value ratios (for mortgages) and haircut floors on securities financing transactions. All these measures address the same underlying problem. An integrated approach is needed for effectively addressing it.

In Schoenmaker and Wierts (2015), we use a stylised model that highlights how debt financing (or leverage) amplifies the effects of asset price fluctuations on balance sheets and markets. Figure 1 illustrates the results. For an assumed asset price growth of 2.5%, it shows how higher leverage (measured in this case as debt divided by equity) strongly increases the eventual effect on balance sheet size. This occurs given that leverage amplifies the effects of asset price increases on the value of equity. This higher equity value allows further debt financing to increase return on equity. The balance sheet grows in this repeated process of equity and debt expansion. Restricting maximum permissible leverage would dampen such amplification, while countercyclical adjustment to maximum leverage could – in theory – stabilise the financial cycle (Gersbach and Rochet 2014).

Figure 1. Illustration of balance sheet growth with leverage and feedback on asset prices1 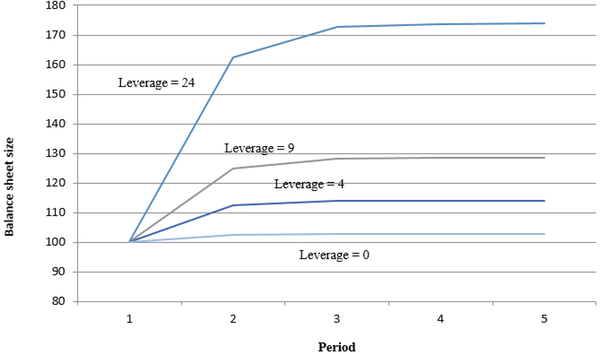 Therefore, regulators are increasingly imposing limits to leverage in some parts of the financial system (but not all). Some segments are already subject to the possibility of regulation on leverage, such as banks (Basel III), hedge funds and private equity (the so-called Alternative Investment Fund Managers Directive) and loan-to-value restrictions at national level. Other parts are under discussion at the Financial Stability Board, such as haircuts on securities financing transactions.

But this piecemeal approach intensifies the boundary problem (Goodhart 2008). When regulation for one sector is tightened, businesses will shift beyond the boundary to another sector with a less binding requirement, or to the unregulated sector. That is exactly the point the CEOs made in their statement earlier this week (World Economic Forum 2015). For example, during the run-up to the financial crisis, mortgage loans at the balance sheet of US banks were transformed into residential mortgage-backed securities at special purpose vehicles that were subject to lower regulatory requirements.

In physics, the phenomenon that activities flow to the least constrained segment is known as the law of communicating vessels. The obvious way to get an equal level of fluid in connected vessels is to ‘harmonise’ the pressure across the vessels. The alternative is trying to disconnect the vessels, which is less successful in finance as financial innovation is often able to arbitrage across the segments of the financial system.

An integrated rather than entity-based approach to regulate leverage is necessary to stabilise the financial cycle across the financial system as a whole. Regulating leverage would help to prevent misallocation of resources from asset bubbles. The leverage ratio requirement would only be applied to debt-based financing across the financial system. This excludes entities or activities that are fully or largely financed by equity, such as mutual or investment funds. It also excludes entities or activities that are financed by premiums instead of debt, such as insurance companies and pension funds. Leverage ratio requirements would only be applied once debt financing of assets surpasses a certain limit, so that it would only apply to entities and activities that are highly debt financed. 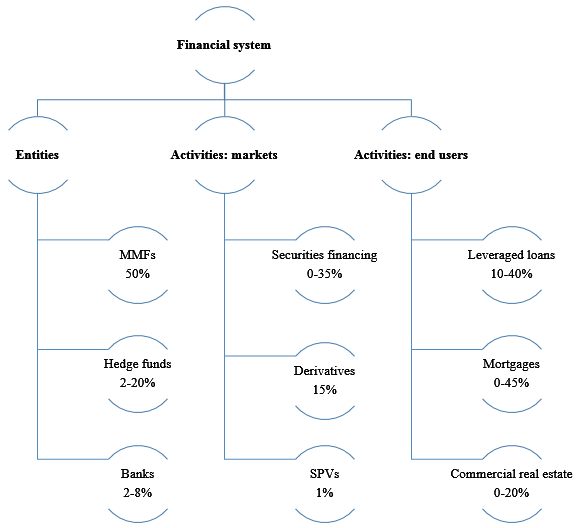 Figure 2 summarises the observed leverage ratio in important debt-financed segments of the financial system, when measured as equity divided by total assets.3 Limiting debt financing in one part would provide strong incentives to market participants for increasing return on equity in another part of the financial system. For example, in recent years the lightly regulated market for private equity investments in combination with leveraged loans or leveraged buy-outs has been booming in the context of search for yield.4

Each sector is using its own terminology. Under Basel III, banks are subject to a leverage ratio (defined as equity to total assets). Moving to financial markets, securities financing transactions (such as repos) are typically ‘overcollateralised’ as the value of the underlying assets can vary due to credit or market risk. This excess is called a haircut, and is basically the equity that a party has to provide when entering a securities financing transaction. Housing finance is using its own terminology. A typical indicator used by mortgage providers is the loan-to-value ratio, which is defined as debt to total assets. In Schoenmaker and Wierts (2015), we show that these concepts are related5 and that a maximum loan-to-value ratio of 90% is equivalent to a minimum leverage ratio of 10%.

Microprudential regulation attunes the leverage ratio for each (regulated) segment to the underlying credit and/or market risk of an individual institution or market. This leads to widely differing ratios in practice. By contrast, our proposal is to develop an integrated regulatory approach with a common leverage ratio for debt-based financing across the financial system. This common macro-based leverage ratio would address the migration of highly leveraged activities due to regulatory arbitrage. This macroprudential requirement should override microprudential requirements, as the former internalises the endogenous effects of leverage.

There is no silver bullet for making the financial system failure-proof. Our proposal is a contribution to the evolving thinking on the appropriate design of financial regulation. Nevertheless, we fear that the current attempts of expanding regulation beyond the core banking system may lead to a patchwork of regulations, which may overregulate the financial system with limited effectiveness.

World Economic Forum (2015), “The Role of Financial Services in Society: Statement in support of macroprudential policies”, May, Geneva.

1 Assumed price growth is 2.5%. The feedback effect on the balance sheet is assumed to be 0.1 for each simulated leverage: .

2 The numbers are indicative and reflect the observed leverage ratios (defined as equity divided by total assets) for each segment of the financial system. The appendix in Schoenmaker and Wierts (2015) details the data sources.

4 Under the Alternative Investment Fund Managers Directive, debt exposure contained in a financial structure controlled by a private equity party is included in the calculation of leverage. In Figure 2, these debts are listed under leveraged loans.