Via Steve Benen and Greg Sargent.

The Washington Post/ABC News pollsters asked “Do you think the federal government should or should not pursue policies that try to reduce the gap between wealthy and less well-off Americans?”. 62% of respondents answered yes. This should be very unsurprising as it is roughly the same as the fraction who have been telling Gallup that high income people pay less than their fair of taxes for two decades now. It is also similar to the number who support higher taxes on high incomes to pay for the ACA and (in another poll) to prevent exaustion of the social security trust fund.

I have been, partly ironically, referring to this solid majority opinion as “class war” but Benen mentioned something which tends to unermine the class war interpretation/joke

What’s more, support for action in this area is quite broad. A majority of Americans regardless of race, for example, support actions to reduce the wealth gap. A majority of Americans regardless of age agree. Indeed, across the board – gender, level of education, household income, geographic region – there’s a broad consensus that this is an issue worthy of national action.

Wait a majority in the highest income sub group (income over $ 100 thousand a year) answered yes ? That sure doesn’t sound like class war does it ? 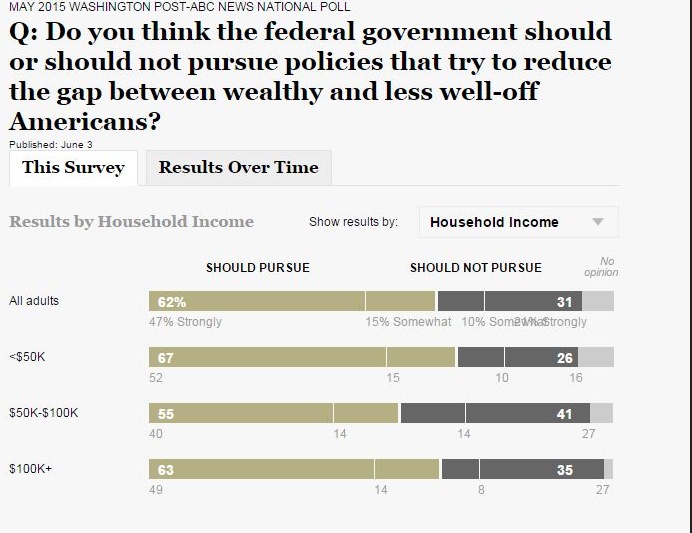 In fact, 63% of those respondents answered yes which is actually a tiny insignificant 1% higher than the overall fraction 62%.

Now I think the class war hypothesis can be saved if the vast majority of even the highest income subset don’t consider themselves “wealthy”. I sure wouldn’t consider a family of 5 with income of $101,000 and a mortgage wealthy (even though they are by world standards and very wealthy by the standards of almost all of human history). The class interest based struggle could be between the bottom 99% and the top 1% who are too few to show up noticeably in polls.

update: the vast majority of households with income over $ 100K are not in the top 1%. In fact almost 22% of US households had income over $ 100K back in 2012. What I meant to type is that the results of the poll can be reconciled with the idea that we are all selfish if the vast majority of houeholds with income over 100K don’t think they are “wealthy” but rather think the wealthy are the top 1%. To get in the top 1% a family needed $388,905 already in 2011. The idea I was trying to present is that someone struggling along with $ 120k might want to take from the wealth with $ 400k per year. I’d rather think that people who consider themselves wealthy are willing to share their wealth with the rest of the US (provided other wealthy people do too).

Still the result is nice and potentially very useful to Democratic candidates who can argue that they are not advocating class warfare but proposing that we deal with a national problem as a majority of Americans regardless of their income think we should.

The strategy has the additional advantage that Republican candidates and operatives will have trouble resisting the argument that the poll is meaningless because many people with income over $ 100K* are absurdly poor takers and not like the job creators at all. Some will not hide the fact that families with income of $110,000 per year are much too poor to be in the class whose interests they serve.