Global water supplies are ‘in distress’, scientists warn Financial Times. I have been saying for years that water is the natural resource for which we will hit supply constraints first. This was based on research in Australia in the early 2000s, so this should have been recognized as a major problem long ago (as in the research in Oz was unlikely to be the first to make this observation).

GMOs and the Neoliberal Apologists Counterpunch

Austrian chancellor sides with Greece in debt row Reuters. If this is what support looks like, it’s not much different aside from the friendlier packaging; “Faymann, a Social Democrat who has taken a relatively lenient line with Greece, told broadcaster ORF that Athens had to live up to commitments under its current bailout plan but needed support to keep it from leaving the euro zone. ” So that means Greece is to take its austerity medicine, as in stick with the current memorandum, but it gets a couple of pieces of “support” candy. And Eurozone officials are making clear that this is not an authorized visit: I’m not quite sure what the Austrian chancellor is doing in Athens,” says senior #EU official. #Greece @SpeigelPeter

Drip Feeding Greece Will End in Default Real News Network. NC gets a shout out at 19:30 on Nathan Tankus’ work on a Grexit. Also confirms our fear that there is no Plan B.

Greece blames everybody but itself for its economic woes Harry Theoharis, Guardian

Europe Asks the Impossible of Greece Bloomberg. Note that Crook is pretty conservative and this is crisp and very well put. But he ignores the other side of the impasse: that having made such a big issue of the pensions (as in broadcasting it as a focus of the fight, so it is a heightened issue domestically and in the international media), it’s also impossible for the Eurozone countries to concede, since Greeks actually have (in cases like Slovakia) or are perceived to have better pensions than their citizens do.

Tsipras misleading Greece, says EU commission chief Juncker DW. This probably does not matter in terms of outcomes, since the ECB and the IMF are the power players, but alienating the EC, which has been trying to find ways to square the circle, wasn’t necessary and can’t help.

Bombing the Arctic: US Navy War Games in Gulf of Alaska Threaten One of World’s Most Pristine Areas Democracy Now. Glenn F: “This is incredible.

Issa escorted out of Benghazi deposition The Hilln (furzy mouse)

Surviving the Drought in California: Farm Workers Struggle to Put Food on the Table TruthOut

After 25 Years of Losing to Wall Street, Left-Wing Democrats Are Winning The Nation (furzy mouse)

Antidote du jour. Gary O: “Here’s a link to photos and story about six four-week old wolf cubs, from The Local: German news in English, “Hand-raised cubs to boost wolf numbers: Nearly 135 years after the last wolf in the Hunsrück area of Rhineland-Palatinate is believed to have been shot dead, six baby wolves are being nurtured by hand.” 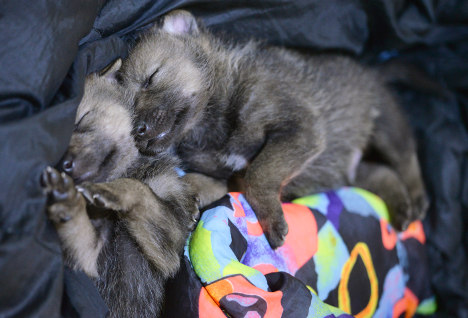