Jim Webb throws his medals into the ring [WaPo]. Personally, I think the Democrats have stumbled into a “two sheepdog” strategy; Governor Jawline on the “left,” and Webb on the right. Webb will now pull the Democrats toward the Blue Dog pit, in which they already all too willing to wallow, and O’Malley will try to marginalize Sanders. (Note that the “sheepdog” metaphor requires conscious collusion between shepherd (the party) and sheepdog (the candidates) to herd the sheep (voters). Not only do I deprecate categorizing voters as sheep — I think it’s disempowering and demeaning to exactly the people who need to be persuaded, and in addition buys into the elite frame that working people are animals destined for slaughter — I think the metaphor is way too simple. In addition, conscious collusion assumes the Democratic leadership is conscious, but that fact isn’t in evidence.

Grey Lady bestirs itself to *research Sanders’ youthful follies, circa 1970, under the banner of “a useful insight into the formative thinking” [New York Times]. Sheesh. If the same level of scrutiny had been applied to Obama so early, we might actually know if he wrote anything while editor of the Harvard Law Journal, or how he got into Columbia.

“Richard Trumka has a message for state and local AFL-CIO leaders tempted to endorse Bernie Sanders: Don’t” [Politico]. Labor’s national misleadership is teh awsum. Can’t somebody clever instigate a rebellion from some locals?

“Sen. Bernie Sanders (I-Vt.), the iconoclastic Democratic presidential challenger who is attracting large crowds of progressives, raised $15 million in his first two months as a candidate, his campaign said Friday” [WaPo]. A quarter of what Clinton raised, but then Sanders doesn’t have an ocean liner to maintain.

Sanders raised his money almost completely online, holding only a handful of traditional fundraising events. … His campaign said he received nearly 400,000 contributions from roughly 250,000 people. The average donation was $33.51, the campaign said.

Dovetailing neatly with the “Big Crowds” strategy, and also interestingly Dean 2004-like. Maybe Sanders should put a tumbril instead of a bat on his website. Kidding!

NOTE * “The image of the upper trigram, Kên, is the mountain [the Green Mountain State], that of the lower, K’an, is water [Burlington’s Lake Champlain]” (Wilhelm translation). At least that’s what an aging hippie might think…

“10 moments of over-the-top flattery in Hillary’s inbox” [Politico].  A fine curated collection. (Reminds me of this piece: “The ‘U.S. military’s marathon, 30-year, single-elimination, suck-up tournament’.” And I would swear we had a piece at NC about tournament theory. But for the life of me I can’t find it. Readers?) I think this is the best on so far, however, and it’s been out since June 22:

Another email shows Mr. Blumenthal eager for Mrs. Clinton to receive credit for the intervention, which culminated in Mr. Gadhafi’s death.

“This is an historic moment and you will be credited for realizing it,” he wrote August 22, 2011. “When Qaddafi is finally removed, you should of course make a public statement before the cameras wherever you are, even in the driveway of your vacation house. You must go on camera. You must establish yourself in the historical record at this moment.” Mrs. Clinton didn’t appear to respond to that message, either.

Yes, another country on the Mediterrean set ablaze, with failed state bonus points. Mission accomplished! (And “didn’t appear to respond” is a delicate way of saying we don’t know if Clinton responded or not, since she privatized her email server, and then released only a partial set of records.)

BUSH: Kids in this country are aimlessly wandering around in their lives because they’ve never been told they were capable of learning. They’ve never been challenged to achieve far better. They’ve never really had the kind of mentoring and nurturing that gives them the sense their lives could be better. You see what happens in Baltimore and Ferguson. You see the tragedies play out. You see people becoming so despondent they take actions that are horrific.

Obama on Walker: “Mr. Obama likened Mr. Walker and the ‘bus full’ of Republican candidates to an ‘Uncle Harry’ at Thanksgiving dinner who says something that makes no sense” [New York Times]. Giving Walker a boost with binary thinkers who see Obama as the devil incarnate.

Maine’s LePage endorsesChristie [Bloomberg], which ought to be the kiss of death for LePage, since Christie looks like Leon Trotsky to LePage’s base. “Christie said he was happy to receive the support ‘from somebody who knows what it’s like to run a blue state.'” Maine is by no means a blue state. In 2014, LePage won by 48.3% to 43.3% (with 8.4% going to a third-party candidate, whose voters were not owned by the two front-runners); check the map at the link. Maine is more like three states, two red. If Christie is trying to make either LePage or himself look like Walker’s equal in Democrat-stomping, he’s delusional.

Politico on these disunited states [Politico].

Examine a wide range of phenomena at the county level—presidential voting results, indices of health, income inequality, education, social mobility, dialects and religiosity—and you’ll see a recognizable pattern of regional ideologies and political preferences going back a century or more. It isn’t and never has been as simple as North versus South, urban and rural, or the effete coasts set against the rugged interior. Rather, our most abiding geographic differences can be traced back to the contrasting ideals of the distinct European colonial cultures that first took root on the eastern and southern rims of what is now the United States and then spread across much of the continent in mutually exclusive settlement bands, laying down the institutions, symbols and cultural norms later arrivals would encounter and, by and large, assimilate into.

Despite a lot of migration and the creation of more and more cosmopolitan metropolitan areas, these regional divisions have in many respects been growing stronger, not weaker, over time, hobbling our sense of common purpose and Congress’ effort to do something as routine as passing a budget.

“An unfruitful jobs recovery rewrites the definition of full employment” [WaPo]. Been saying this for years (2009; [lambert blushes modestly].

“The size of the labor force tanked last month, helping to make for a very mixed June jobs report” [Bloomberg].

“For small banks, both nationally and regionally, commercial and industrial (C&I), real estate, and consumer loan totals increased by double-digit rates from the first quarter of 2014” [EconIntersect].

“Taking a broad view, under Obama the American economy has done worse than it has done under any Democratic president since the Civil War” [Brad DeLong]. However, this is an unfair and tendentious excerpt of DeLong’s thoughtful piece.

“Before negotiations could resume following a potential request from Greece, the Eurogroup would have to agree and the German parliament mandate his government to negotiate, Schaeuble said. It will take its time,’ he told [Bild]. ‘One thing I know already: These would be difficult negotiations, because the situation in Greece has dramatically deteriorated in recent weeks.'” Said Schaeuble, licking his chops. He doesn’t say “difficult” for whom, but I think I can guess [Market News].

Excellent cartoon, which sadly I cannot reproduce here, but do click through [Alex]. Because it’s all about the fee fees!

“The Board of Directors of the European Financial Stability Facility (EFSF) decided today to opt for a Reservation of Rights on EFSF loans to Greece, after the non-payment of Greece to the International Monetary Fund (IMF)” [Market News]. This is a little bit Delphic to me, but perhaps knowledgeable readers can weigh in. Be sure to read the whole piece, though!

“Greek banks down to €500m in cash reserves as economy crashes” [Daily Telegraph]. That doesn’t seem like much.

No contagion so far: “For us as investors, we trust (ECB President Mario) Draghi will do whatever it takes to prevent a liquidity crisis from occurring,” said Alain Zeitouni, head of Russell Investments France. “This ‘Draghi-put’ is, and remains, a major reason why we are still looking at current events from the perspective of a buying opportunity” [Market News]. Ah, the Draghi put.

On a possible Greek challenge to expulsion from the Eurozone in the European Court of Justice: “That level of uncertainty might give Greece the encouragement to float the possibility of a challenge, and if nothing else it delivers the prospect of a drawn out legal battle that struggles to reach a satisfactory conclusion – but which would probably still buy a bucketful of bargaining time” [Econintersect].

On the IMF “Preliminary debt sustainability analysis”  (PDF), which is on the referendum ballot: “[P]art of the political challenge of these lending programs: undertake massive effort on ‘reforms’ and you might, if everything else goes well, get a not-especially-exciting growth rate [2%]. And the voters on Sunday don’t even know which set of “reforms” they are voting on, let alone their long-term consequences” [Fistful of Euros].

“Greece is not the only country with voters” [Op-Ed, New York Times]. Lots of harrumphing and plenty to disagree with here, but that part the writer got right. “[E]ach of Mr. Tsipras’s fellow European prime ministers already has their own democratic mandate.” This is the Democratic deficit in the EU so often spoke of. Unfortunately, this deficit can’t be fixed at the nation-state level, as the cheerleaders seem to believe.

So Greece has privatized ballot counting. And it looks like the ballots will not be hand-counted, and not in public. Granted, I’ve got nothing against Singular Logic, but the Greek referendum does not meet the “gold standard” for balloting.

“[T]he roots of the flawed [Vermont Health Care] rollout lie in fact in the market-based approach of the Affordable Care Act, with its insurance industry-guided design, complete with tiers of coverage and eligibility restrictions. Rather than ushering in a new era of treating health care as a right and a public good for all, the ACA has enshrined a fundamentally unjust market-based system with different and unequal insurance products, different and unequal prices for health services, and different and unequal access to care” [Burlington Free Press]. Mission accomplished!

“Consciousness has less control than believed, according to new theory” [Science Daily].

There is a great deal of research underway on the network graphs that can be identified within social media populations. But an early takeaway seems to be that segmentation rather than convergence appears to be the most common pattern. This seems to run contrary to the goals of deliberative democracy. Rather than exposing themselves to challenging ideas from people and sources in the other community, people tend to stay in their own circle.

Important. Remember Conway’s Law, however: “Any organization that designs a system (defined broadly) will produce a design whose structure is a copy of the organization’s communication structure.” All the social media software was written by brogrammers (in Zuckerberg’s case, an especially noxious one) and funded, at least in large part, by squillionaire glibertarians. So perhaps another world is possible.

Readers, feel free to contact me with (a) links, and even better (b) sources I should curate regularly, and (c) to find out how to send me images of plants. Vegetables are fine! Fungi are deemed to be honorary plants! See the previous Water Cooler (with plant) here. And here’s today’s plant (H):

One more from H’s permaculture project in Texas: 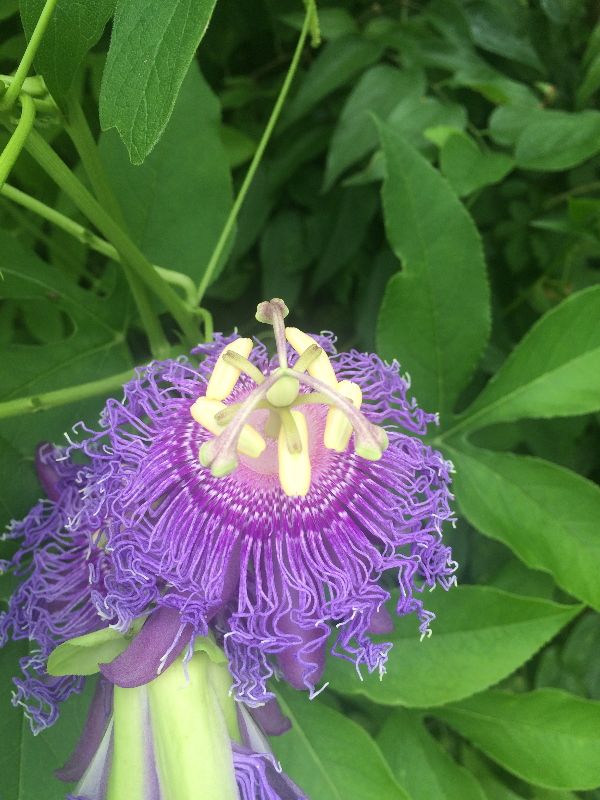 1) Passionflower (rampant on our property)

Not sure they’d grow in Zone 5b, though…

Readers, if any of you do some work in the garden over the long weekend, please use the contact form. I know H isn’t the only one with a permaculture project out there!