If you have not visited the site in the last few days, please read our post on our site policy change.

China’s Incendiary Market Is Fanned by Borrowers and Manipulation NYT

Is there a chance that whilst everyone’s talking about Airbnb’s stellar growth — which increasingly stands, just like in the case of Uber, for getting amateurs to invest in fixed assets on the false presumption they can make guaranteed profits and then being sorely disappointed — there’s going to be significant churn in the next few years as those who can’t stomach the costs, the depreciation or the hassle pull out?

Less politely, the initial “disruption,” exactly as with Uber, is breaking the law.

There are also many questioning the sense in a group of people, no matter their ranks or experience, making decisions like this at 5am after an all night meeting.

Greece news live: eurozone split over Grexit ultimatum plan as Greeks says they are being ‘crushed’ by Brussels Telegraph

Timothy Geithner reveals Schauble’s plan to kick Greece out of the euro and ‘terrify’ the rest of Europe The Press Project (2014).

What were the Greeks thinking? Here’s a poll taken just before the referendum. WaPo

Where does the legal right to a 5y GREXIT exist? Brian M. Lucey

How a Chinese puzzle could enable the Greeks to have the last laugh David McWilliams. Greece could adopt the Chinese Renminbi; an idea from Ireland.

We Can All Get by Quite Well Without Banks – Ireland Managed to Survive Without Them Common Dreams (Edward Qubain). Another idea from Ireland:

Undated checks, often endorsed over to others but never cashed, became a form of currency. When the supply of checks dried up, people wrote new ones on any available piece of paper, sometimes adding a postage stamp to give it an official appearance. There was talk of some checks being written on beer mats and lavatory paper. It was a system that worked because it drew on local knowledge and trust. The people exchanging checks and IOUs knew each other well, and if they did not, they could soon find the necessary information to assess each other’s credit-worthiness. At that time there were 11,000 pubs in Ireland and 12,000 shops that became substitutes for the banks. Antoin E Murphy, who carried out a study on the strike’s effects, found the public’s ability to assess risk ‘was based on a vast pool of information available to transactors on the credit-worthiness of other transactors’.

Yves has addressed this idea, but I thought it was important to hoist the link for the record. It’s a fascinating take on Minsky’s epigram that “Everyone can create money; the problem is to get it accepted.” Yves points out this idea will hardly work for the tourist industry (18% of GDP) or imports (oil to refine for export; pharmaceuticals). I’d point out that a strike is, by definition, temporary; it’s not clear how long Ireland could have played pass the parcel like this, let alone Greece. Now, it’s possible that if Greece reverted to autarky, this might be tried, assuming that cultural factors don’t prevent porting an Irish solution; but my guess is that if this were going to be done, it would already have been done, and that an existing local currency like TEM might be a better bet.

Finally, these ideas — this one, and the previous one — although well-meant, are just that: Ideas. Planning or at least publicity for each would have had to have started long ago, and there’s no sign that any of that has been done, or that the Greece has the organizational capacity to do that, or even did any planning for a Grexit.

The Democrats’ Demographic Edge The Atlantic

Get ready for the pro-Israel NRA Jennifer Rubin, WaPo

Small Business Health Insurance Exchanges Are Off To A Rocky Start KHN. Shocker.

About that hammer-and-sickle crucifix presented to Pope Francis in Bolivia The Dialog (GF).

Why humans run the world TED

Real markets are professional and open, not informal and clubby. Participants in real markets compete on merit rather than collude online.

Real markets are resilient, fair and effective.  They maintain their social licence.

Real markets don’t just happen; they depend on the quality of market infrastructure.

Robust market infrastructure is a public good, one in constant danger of under-provision because the best markets innovate continually.  This inherent risk can only be managed if all market actors, public and private, recognise their responsibilities for the system as a whole.

Well, as I said yesterday, I dunno. I would like, seriously, for somebody to explain, historically or theoretically, why Carney’s view of what “real markets” are is not a Utopian fantasy, and why the humongous LIBOR fraud — only one of many — is not the reality. Note that at the very least, Carney flushes the concept of “equilibrium” down the toilet — where it belongs — since as he explains markets are, as it were, aerodynamically unstable, requiring the constant intervention of skilled and authoritative humans to remain airborne. Leaving aside the edge case of a controlled flight into terrain, as we have been seeing in Europe. 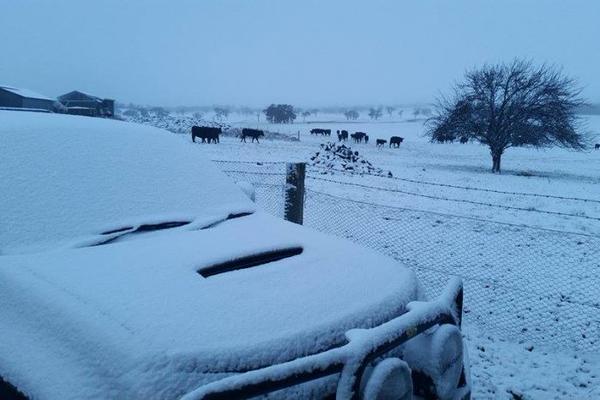 Winter is coming! Unless you are in the Antipodes, in which case it is already here. Poor cows! (Snow in New South Wales south and north-west, and west of Sydney.)