Donna Brazile is a Democratic insider’s insider. (“Campaign Zero” is the policy agenda put forward by a subset of BLM called “We The Protesters,” discussed here.)

If you’ll check, you’ll see that Clinton is notably light on endorsing any part of this policy agenda. Brazile has to know this. So….

“John Anderson ran in 22 Republican presidential primaries in 1980 and still got on the ballot in all states in November as an independent or minor party candidate. After Anderson, the individual who set the most precedents is Lyndon LaRouche, who sought the Democratic nomination in 1984, 1988, and 1992, and then ran as an independent in all three elections” [Ballot Access News].

Frank Luntz polls trump voters: “Pollster’s Legs Wobble After Fawning Donald Trump Focus Group” [Time]. “‘He’s not afraid,” said a woman who voted twice for Obama. ‘He keeps prodding on even if people give him negative press. He doesn’t change and apologize.”

“By the night’s end, Rice was sold. ‘I heard echoes of Ronald Reagan,’ he told me, adding, ‘If I had to vote today, I would vote for Trump'” [The New Yorker]. Equating Trump and Reagan is a sign of normalizing Trump. Watch out for that.

Sanders game plan: “Confront Hillary Clinton on issues – not her email use – resist the lure of negative attacks, pull off an upset in an early primary contest and harness that momentum to catapult forward into a targeted state-based fight for delegates” [US News]. Interview with Sanders strategist Tad Devine. “Four separate Clinton spokespeople and advisers did not respond to inquiries seeking a counterview.” And: “Sanders does not yet have paid staffers in any state holding a contest in March … At the top of that list [for later primaries] are Massachusetts, whose residents will see much of the advertising and media coverage of the campaign in next door New Hampshire, as well as Colorado….

“[W]ith 28 Democrats backing the deal and 16 undecided, Obama is likely to reach veto-proof support for September’s resolution of disapproval, which would block congressional sanctions from being lifted. Obama needs 34 votes to sustain a veto” [Politico].

The Fed: “Turbulence in financial markets and the shaky global economy are casting doubt over whether the Federal Reserve will take the landmark step of raising its target interest rate when it meets next month” [WaPo]. “Landmark” only because free money for those who have lots of it is now the new normal.

New Home Sales, July 2015: “New home sales rose solidly in July from a downdraft in June” [Bloomberg]. “The housing sector may not be soaring, but it is a center of strength for the economy.” But: “The rolling averages smooth out much of the uneven data produced in this series – and this month there was an insignificant deceleration in the rolling averages” [Econintersect]. “The quantity of new single family homes for sale remains well below historical levels.”

FHFA House Price Index, June 2015: “FHFA and Case-Shiller are both telling the same story: Home prices were soft going into the summer” [Bloomberg]. “Sales rates are tracking at roughly double the pace of price growth, a mismatch that points ahead to price acceleration given how thin inventories are right now in the housing sector.”

S&P Case-Shiller HPI, June 2105:  “Inventories may be low and sales rates firm, but both Case-Shiller and FHFA are pointing to a surprising flat spot for home-price appreciation” [Bloomberg]. “Softness in home prices is a surprise and suggests that sellers are offering price concessions.” But: “The way to understand the dynamics of home prices is to watch the direction of the rate of change. Here home price growth generally appears to be stabilizing (rate of growth not rising or falling)” [Econintersect].

Consumer Confidence, August 2015: “Enormous improvement in the assessment of the current labor market drove the consumer confidence index well beyond expectations. The expectations component also shows major strength. Buying plans, however, are downbeat with fewer planning to buy a vehicle and, in what could be an ominous indication for housing, many fewer planning to buy a house. Inflation expectations are dormant” [Bloomberg]. “The Yellen Fed has put great emphasis on the importance on consumer confidence readings and this report points to job-driven strength ahead for household spending.” And: “This index has now improved to a point that its level is now commenserate with periods of economic expansion” [Econintersect].

PMI Services Flash, August 2015:  “Service-sector growth is holding solid this month, well over breakeven. A negative is a marked slowing in new orders where” [Bloomberg]. “The service sector is more important than ever to the health of the economy given building troubles in China and Asia and slowing in Europe.”

Richmond Fed Manufacturing Index, August 2015: “Early indications on August factory conditions are mixed with Richmond the latest, coming in at a disappointing zero,” below expectations [Bloomberg]. ” Hiring is flat and price data are mute. This report follows last week’s big fall in the Empire State report and respectable readings in the Philly Fed and manufacturing PMI reports. All together, they point to a bumpy month for the still struggling factory sector.”

“At 2.4% of GDP, the current year’s deficit will be the smallest since 2007 and below the 50-year average relative to the size of the economy” [Market News].

“Of course all of this can be reversed for the better with a simple fiscal expansion, as the underlying problem remains- the Federal deficit is too small in the absence of sufficient private sector deficit spending needed to offset desires to not spend income. (Yes, it’s always an unspent income story…)” [Mosler Economics].

“U.S. stocks jumped Tuesday, echoing a rally in Europe, after Beijing cut interest rates and strength in a key barometer of economic health helped lift shares following a deep rout. ” [Wall Street Journal, “U.S. Stocks Jump as Global Markets Stabilize After China Fall”]. “In currency markets, many of the previous day’s big moves went into reverse. A host of emerging-market currencies gained against the dollar, including the South African rand and Russian ruble.”

“I Knew Black Monday. Black Monday Was a Friend of Mine. This Was No Black Monday” [Streetwise Professor]. “Today’s move was about a 3 sigma move. Black Monday, 1987, was a 20 sigma move. If the world was normal-which it ain’t, of course-a 20 sigma move should occur every several billion lives of the universe. Three sigma moves occur about once every five years. So in fact, we’re a little bit overdue.”  (“You were lucky.”)

“This week’s stock market turbulence could turn out to be a lot like [the 1987 Crash] — a source of stress for traders in the world’s stock markets, but not necessarily a sign that larger economic problems are looming” [Vox].

“Private so-called unicorns like Airbnb and Palantir … are racking up big losses yet have attracted astonishing valuations – $50 billion for Uber, for example. These beasts will take a bigger hit, but their suffering will, for now at least, take place behind closed doors” [Reuters],

“America’s largest bank, JPMorgan Chase, has lost 10.87 percent of its market capitalization in the past three trading sessions. That’s $27.18 billion in three days, raising serious questions about the Federal Reserve’s theory that beefed up equity capital would buffer the mega banks in a market downturn” [Wall Street on Parade].

“A White House spokesman on Monday sought to soothe public fears amid dramatic volatility in U.S. stock markets, while delivering a warning to Congress to avoid a ‘self-inflicted wound'” [The Hill].  Another government shutdown, not some form of reflexivity.

“I was a civil rights activist in the 1960s. But it’s hard for me to get behind Black Lives Matter” [WaPo]. I don’t care about their saggy pants, and I don’t care for pound cake.

“It’s not often that a man who laid the blueprint out for some of the most prominent Classical Civil Rights activists and their protest methods gets forgotten, lost to the wind, and rarely discussed. It’s not often that the man who assembled together 200,000 people in front of the Capitol Mall for the iconic March on Washington to be conspicuously left out of the textbooks” [Buzzfeed]. Bayard Rustin.

“[T]he [National Park Service] has hired two historians to conduct its first comprehensive survey of ‘nationally significant’ sites connected with Reconstruction” [New York Times]. The half has never been told about this, either.

“Nation Just Hoping Next President Can Prevent Country’s Decline From Being Totally Humiliating” [The Onion].

“Defense Secretary Ash Carter, in shaping his ‘Force of the Future’ initiative, is weighing creation of new ‘technical career tracks’ that would allow many more high-tech military personnel to serve full careers without having to strive for command or being pushed into supervisory roles” [Military Advantage]. Attaboy. That’s the way to make the civlian economy flourish.

“n order to navigate increasing regulations and the burgeoning cost of practice, the majority of physicians in this country are now under contract with multispecialty medical groups with at least 50 doctors, which in turn are getting snapped up by hedge funds, hospitals, and corporations, he says” [Vice]. “Buyers expect a healthy bottom line from their investments, Caplan says. Evidence suggests their expectations are being met.” So if you think your doctor has your health is the first priority, think at least twice, because incentives are all the other way.

“Could Jeremy Corbyn resurrect Labour in Scotland?” [The Conversation]. Probably not; the separatist train has left the station.

” Why is Corbyn doing better on social media?” [Open Democracy]. “Old fashioned public rhetoric has been given a new lease of life by the internet. It is estimated that Mhairi Black’s maiden speech to the Commons has been viewed by millions; millions more have watched Emma Watson speak to the UN about feminism, Obama’s eulogy for Clementa Pinckney and Steve Jobs’ Commencement address.”

“ATM Fees Drag Down People on Public Assistance” [American Banker]. “These ATM fees can cost families 1% or more of their already small monthly income, according to the EBT Working Group.”

“Literary Magazines for Socialists Funded by the CIA, Ranked ” [The Awl].

“The Koreas on Tuesday once again proved their mastery at pulling back from the brink — this time with an accord forged in two marathon negotiating sessions over three days” [Japan Times].

“Uber Is Laying The Groundwork For Perpetual Rides In San Francisco” [BuzzFeed]. Uber CEO Travis Kalanieack’s dream: “It’s the perpetual trip, the trip that never ends. The driver picks one passenger up, picks another passenger up, drops off the first passenger, but then picks up passenger number three and drops off passenger number two.” That dream is called a “bus.” Kalanick and his funders are stunned by the brilliance of “Smart Routes” because they don’t take public transportation.

“A series of studies by researchers at Columbia Business School, Harvard Business School and Insead, a European business school, published online this month in the journal Organizational Behavior and Human Decision Processes, asserts that people who are able to understand sarcasm are more creative and better able to solve problems. But, to avoid conflict, sarcasm is best used between people who trust each other” [Wall Street Journal, “People Love Your Sarcasm, Really”]

Readers, feel free to contact me with (a) links, and even better (b) sources I should curate regularly, and (c) to find out how to send me images of plants. Vegetables are fine! Fungi are deemed to be honorary plants! See the previous Water Cooler (with plant) here. And here’s today’s plant (Jon): 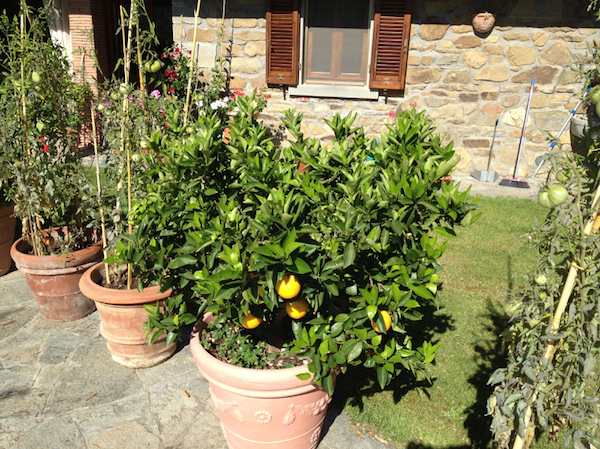 Oranges (?) and tomatoes! I just ate my first ripe tomato yesterday; I’m guessing people in Florida are on their second or third crop!