The strength of the US dollar can impact the economic activity in emerging economies in various ways. This column argues that appreciation of the dollar mitigates the impact of real GDP growth in emerging markets. The main transmission channel is through an income effect. As the dollar appreciates, commodity prices fall, depressing domestic demand via lower real income, and as a result real GDP in emerging markets decelerates. Emerging markets’ growth is expected to remain subdued, reflecting the expected persistence of the strong dollar.

US Dollar and Emerging Markets

What is the effect of a stronger or weaker US dollar on emerging markets’ economic activity? Frenkel (1986) documents that US monetary easing – usually related to a more depreciated dollar – results in higher commodity prices, and vice versa. Dornbusch (1986), Borensztein and Reinhart (1994), and Akram (2009) show that nominal and real commodity prices depend negatively on the US real exchange rate. In parallel, Engel and Hamilton (1990) have long ago documented the long swings in dollar values. However, we are not aware of any systematic evidence of the link between the strength of the US dollar and economic activity in emerging markets over the dollar cycle – less so of any study documenting the transmission channel. In a recent paper (Druck et al., 2015) we try to bridge this gap.

The main transmission channel is through an income effect owing to the impact of the dollar on global commodity prices. As the dollar appreciates, dollar commodity prices tend to fall. In turn, weaker commodity prices depress domestic demand via lower real (dollar) income. Thus, real GDP in emerging markets decelerates. Moreover, we show that these effects hold despite any potential expenditure-switching effect resulting from the relative currency depreciation of emerging market economies when the dollar appreciates. We also show that despite controlling for the effects of the US real exchange rate appreciation and real GDP growth, an increase in the US interest rate further reduces growth in emerging markets. All these effects are stronger in countries with more rigid exchange rate regimes. Finally, although net commodity exporters are affected the most, countries that rely on importing capital or inputs for domestic production will also be affected. Therefore, at the time of writing, emerging markets’ growth is likely to remain subdued reflecting, in part, the expected persistence of the strong dollar and the anticipated increase in the US interest rates.

Why the US real effective exchange rate has such an impact? For developing countries, this is essentially an exogenous variable. Most international transactions are priced in US dollars, including commodity prices. And emerging markets (excluding perhaps China) cannot affect much the weights in the multilateral exchange rate of the US. Thus, developments in the US affect emerging markets – and not vice versa. Further, the independence of US macroeconomic policy with respect to less developed countries suggests that the US real exchange rate is likely to be more relevant and even more exogenous than the terms of trade. 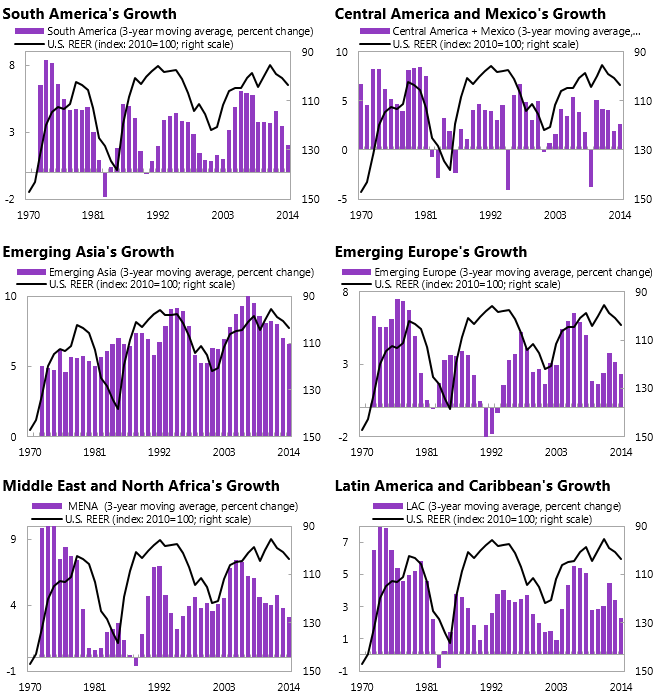 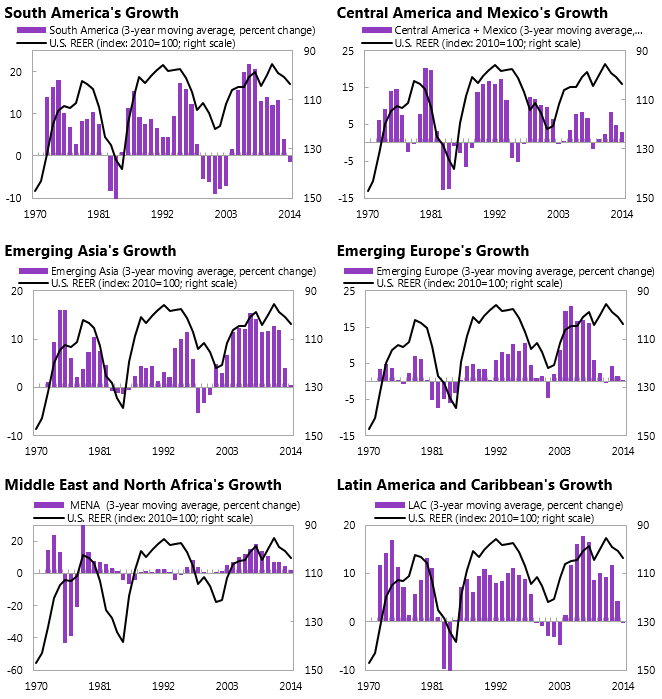 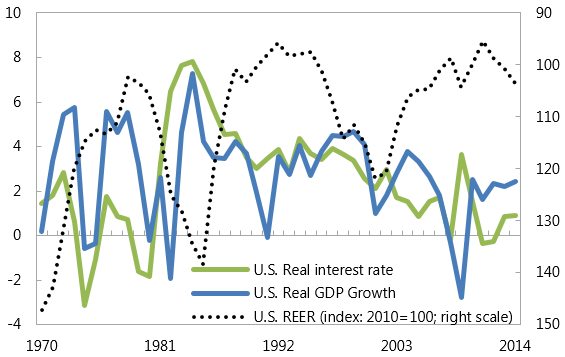 Figure 4. Real GDP during US dollar appreciation and depreciation cycles 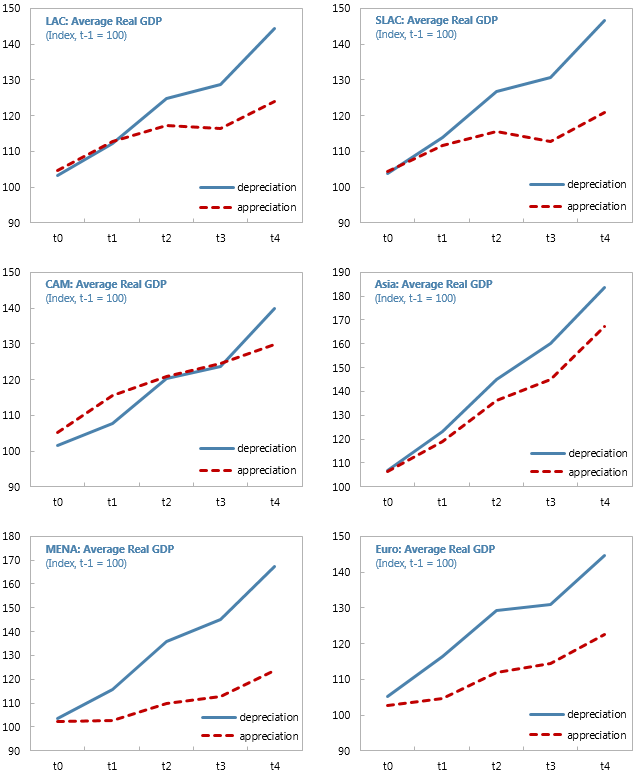 Except for Central America and Mexico, every other emerging region shows that real GDP is lower during periods of US dollar appreciation. We observe that this pattern holds for Latin America as an aggregate, and especially for South America. The latter is a strong commodity exporter – unlike Central America and Mexico. It also holds for emerging countries in the Middle East and North Africa Region (MENA), as well as for emerging Europe. To a lesser extent, it also true for emerging Asia. On average, Latin America’s slower growth results in real GDP being about 25 percentage points lower toward the end of the cycle during appreciation cycles than during depreciation cycles. South America’s differences are of similar order of magnitude. They are even higher in MENA countries – about 50 percentage points, while lower in emerging Asia, though still sizeable (at about 20 percentage points). There is not such a marked difference in Central America and Mexico, however. Among the possible causes of the latter, are the strong links via trade, tourism, and remittances. The trade link operates through the external demand for goods. Tourism boosts external demand for services. And remittances transfer resources from the US to Mexico, Central America, and the Caribbean. All these factors help increase domestic demand and income in the emerging and developing countries. Thus, they could offset any negative income effect owing to the stronger dollar. Countries with hard pegs or outright dollarization tend to be further synchronised with the US’ business cycle. 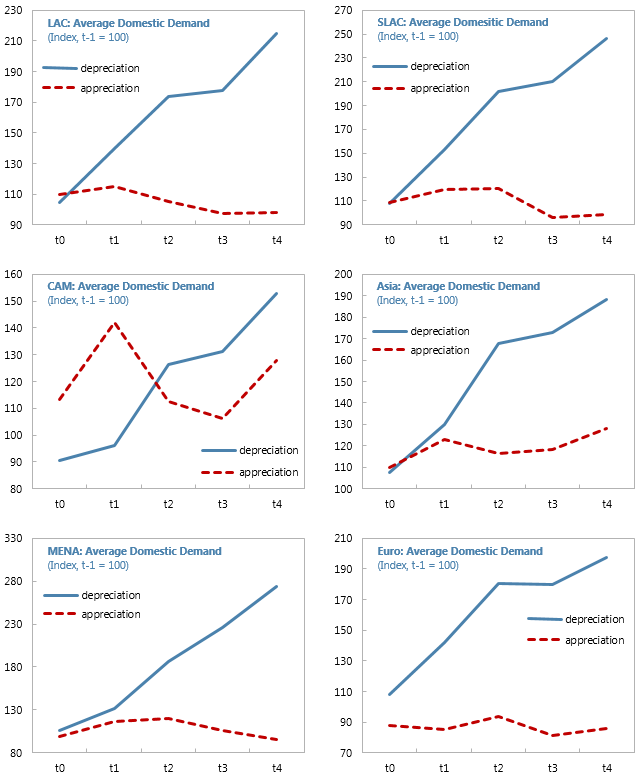 In fact, in many of the regions domestic demand actually decreases or remains flat during appreciation phases. We take this as a powerful indication of the negative impact of a stronger dollar on the purchasing power of domestic demand. In turn, this could suggest that it might be the case that the income effect actually dominates the (expenditure-switching) substitution effect in some cases.

After sketching a simple model to rationalise our findings, we run two sets of simple regressions to test the above stylised facts. The left-hand side variable is either the growth rate of emerging markets’ real GDP or real domestic demand, respectively. Despite controlling for US and China’s real GDP growth rates (external demand), US real interest rates (financial channel), net capital inflows (availability of external financing), volatility (uncertainty), commodity terms of trade, and several other controls, there is a strong statistically significant effect of the US real effective exchange rate on emerging markets’ growth. This effect is negative, particularly so for domestic demand. It holds across different emerging regions, with varying degrees. It is especially strong for net commodity exporters. But it is also relevant for countries that rely on importing capital or inputs to produce. For economies with more exchange rate flexibility, the effect is weaker on output, but stronger on domestic demand, as expected. Thus, a stronger US dollar lowers real GDP and domestic demand growth.

The US dollar is on an appreciating cycle since mid-2014. Based on our historical estimations, the probability of the dollar remaining appreciated in the short- and medium-term is high (above 80%), in line with appreciating cycles in the US dollar of about 6­8 years. In the circumstances, commodity prices would remain weak. Together, these effects point to slower domestic demand and real GDP growth in emerging markets than otherwise – across all regions.

Moreover, in the context of a lift-off in US interest rates as the Federal Reserve is expected to start unwinding the extraordinary expansionary monetary policy implemented in recent years, if anything, the US dollar is more likely to remain strong. Capital inflows to emerging markets are likely to moderate at best (even if no capital flow reversal takes place), on the back of weaker commodity prices. Unfortunately, thus, the external front for these economies is not promising.

Strong US growth is good for emerging markets, as external demand for the latter increases. Beyond that effect, however, a stronger US dollar mitigates the expansionary effect of faster growth in the US, via an income effect. The latter, in turn, is particularly strong for commodity exporters and countries with more rigid exchange rate regimes. To a lesser extent, countries that rely on importing capital and intermediate inputs in production could also experience this offsetting income effect via domestic demand. And higher US real interest rate further adds to the mitigation/amplification effect or the tighter/easier financial conditions that usually come along with a more appreciated dollar.

Disclaimer: The views expressed are those of the authors and do not necessarily represent the views of the IMF, its Executive Board of management.

3 Given that each event is not necessarily of the same period length, we discretize the length of each event. To this end, let us call period t0 the first observation in any appreciation or depreciation cycle and (the real GDP) observation in the last year of the appreciation or depreciation cycle as t4. Let us standardise real GDP in period t-1 equal to 100. Given the data for real GDP growth rates for each (PPP-weighted) real GDP, we reconstruct the indexed real GDP for each region. We discretize the time-space to compute the real GDP index at the half-life of each event, as well as at quarter-life and three-quarter-life. Last, we compute basic statistics across each set of appreciation and depreciation episodes at t0, ¼, ½, and ¾ and t, respectively (which we label as t0, t1, t2, t3, and t4, respectively).