Yves here. We’ve focused on how the operational issues of going to the drachma involve considerable delays and costs that look to more than outweigh the oft-claimed advantages. This post describes another set of complexities and costs: that Greece will often come out the loser as far as its efforts to force redenomination of contracts from euros to drachma are concerned.

Many commentators continue to think that Greece’s best bet is Grexit and the drachma, but few are talking about what will happen to contracts. This column uses Franklin D Roosevelt’s devaluation of the US dollar to give an historical perspective on currency devaluations and contract litigation. Roosevelt got away with it because the Supreme Court ruled that prices in old contracts were void and, importantly, because everyone trusted the Supreme Court’s rulings. Grexit would mean litigation in international courts – courts that are likely to side with the plaintiffs.

A number of commentators continue to think that Greece’s best option is to exit the Eurozone and reintroduce the drachma at a depreciated level ((e.g. Brinded 2015). Those that favour this policy argue that with a currency of its own and exchange rate flexibility, Greece would gain competitiveness, increase exports, and move towards recovery.

This view, however, ignores the effect of such a policy on contracts. Almost every contract in Greece is written in euros – labour contracts, suppliers’ contracts, debt contracts (private and public), service contracts, investment contracts, and so on. After the reintroduction of the drachma, will these contracts be enforced in euros (the original currency agreed by the parties) or in the new (depreciated) currency? This issue is important even if Greece is granted considerable debt forgiveness.

In principle, the legislation that would reintroduce the drachma could also state that contract originally written in euros would be converted into new drachmas, at a depreciated exchange rate. Creditors, however, will cry foul and will turn to the courts in an effort to receive payments according to the original contracts, in hard and convertible euros.

Greek courts are likely to side with the government, and declare that the old contracts are void and that the new drachma could be used to discharge debts and other obligations. But in a globalised world, domestic courts usually don’t have the last word. Litigation will move to international courts and arbitration tribunals. As a member of the EU, Greece has to abide by EU laws and regulations, and creditors will flood European courts with all sorts of claims related to the annulment of euro-denominated contracts.

Greece has also signed bilateral investment treaties with 39 countries, including Germany, Russia, Korea and China. Thus, any attempt to change the currency of contracts will end up in arbitration at the International Centre for Settlement of Investment Disputes, the World Bank’s tribunal for investment disputes. This is, indeed, what happened in Argentina after it devalued the peso in 2002 and ‘pesified’ contracts. In most cases, the Centre ruled for the claimant and ordered Argentina to pay large compensation awards (on Argentina’s crisis and devaluation, see Edwards 2015a).

But Argentina is not the only historical antecedent that is valuable for understanding what may happen if Greece decides to exit the Eurozone. Another interesting case is the US in the 1930s, when President Franklin D Roosevelt took the country ‘off gold’ and devalued the US dollar by 41%.

The Abrogation of the Gold Clauses in 1933

In April of 1933, and in the light of a major banking crisis and a severe run on the currency, President Roosevelt – who had been in power for little more than one month – decided to declare a gold embargo and take the US off gold. He also decided to devalue the US dollar, mostly as a way of increasing agricultural prices.

However, there was a serious problem with this plan. At the time, virtually all of the public debt and a very large amount of private debt – railway and public utilities’ bonds, and mortgage debt – was denominated in ‘gold coin’, and were payable in specie or its equivalent in paper money. In total, over $100 billion of debt was gold-denominated – nominal GDP at the time was $66 billion. President Roosevelt decided to deal with this situation by asking Congress to “abrogate the gold clauses”. And that is what Congress did on 5 June 1933 (for an analysis of this episode, see Kroszner 1999).

On 31 January 1934, and after a transitional period where a number of unorthodox policies were tried, President Roosevelt officially devalued the dollar by 41% and fixed the new price of gold at $35 an ounce (since 1834 it had been $20.67). In explaining the decision, Roosevelt said that the devaluation was necessary, since the nation had been “adversely affected by virtue of the depreciation in the value of currencies to other Governments in relation to the present standard of value”.1

In a recent paper I discuss in detail the process that led to the devaluation of the dollar (Edwards 2015a). In Figure 1, I present weekly data on the US dollar/sterling and US dollar/French franc spot exchange rates between 1921 and 1936. Both rates are in the form of ‘dollars per unit of foreign currency’. This figure captures: 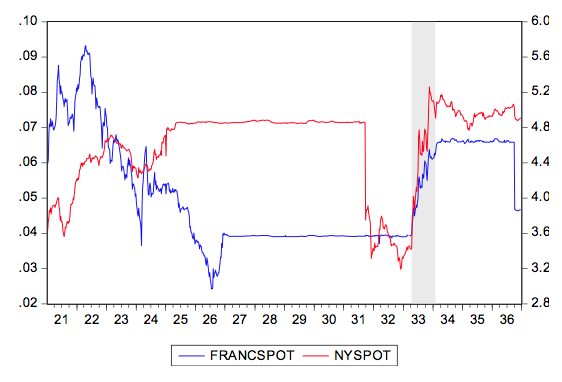 Investors that had purchased securities protected by the gold clause claimed that the Joint Declaration of June 1933 was unconstitutional, and various lawsuits were filed.2 Four of them got to the Supreme Court and were heard between 8 January and 11 January 1935. The first two cases had to do with private debts. One referred to a railroad bond (Norman v. Baltimore & Ohio Railroad Co), and the second to a mortgage debt secured by a bond denominated in Gold Dollars (United States v. Bankers Trust). In the railroad case, the bond was a 30-year obligation issued on 1 February 1930 with a 4.5% coupon payable “in gold coin of the United States of America of or equal to the standard of weight and finesse existing on 1 February 1930”.3 On 1 February 1934 the holder of the bond asked to be paid $38.10 corresponding to the semi-annual coupon, at the new price of gold. The issuer argued that it only owed $22.50.

The third case involved a government bond in the series of the Fourth Liberty Loan issued on 15 October 1918. The obligation for this “4.5% Gold Bond” expressly stipulated that “the principal and interest hereof are payable in United States gold coin of the present standard of value” (Perry v. United States). The holder of this bond asked to be paid $35 per troy ounce of gold. The Treasury refused, and made a payment in paper dollars using the old parity of $20.67.per ounce of gold. The fourth case referred to a Gold Certificate (Nortz v. United States).

The Supreme Court ruled on 17 February 1935. In all cases the vote was 5 to 4 in favour of the government’s position. However, the majority used different arguments to decide the public and private debt cases.

In the private debt cases the majority, led by the Chief Justice Charles Evans Hughes, pointed out that according to the Constitution, Congress had the power to conduct monetary policy – more specifically, under Article 1, Section 8, Congress had the power to “coin Money, [and] regulate the Value thereof.” Thus, based on this constitutional prerogative, Congress could invalidate private contracts – including the gold clauses – if they interfered with such power.

There was a single dissent signed by the four conservative members of the Court. It was delivered by Justice James C McReynolds, who said: “The Constitution as many of us understood it, the instrument that has meant so much to us, is gone”. He ended his allocution with strong words: “Shame and humiliation are upon us now. Moral and financial chaos may be confidently be expected.”4

In spite of Justice McReynolds’ sombre statement, after the Supreme Court rulings the economy didn’t collapse, nor did uncertainty take over. In fact, the Treasury had no problem issuing new debt, nor did it have to offer higher yields to place it. The reason for this was that in the US there was a highly respected and credible institution – the Supreme Court – whose ruling was final and accepted by all parties. Moreover, very few foreign investors were affected by the modification of contracts, and even those that incurred in losses had no recourse at the international level.

This, however, is not the case in Greece. As noted, if Greece decides to exit the euro and abrogate contracts, there will be, with all likelihood, a multitude of lawsuits that will be heard by international courts and arbitration tribunals. As in the recent case of Argentina, these courts are likely to rule for the plaintiffs, adding a considerable cost to the Grexit strategy.