Yves here. The premise I disagree with in this post is that the Fed is primarily concerned about the real economy in its decision as to whether to raise interest rates. The central bank is instead desperate to back out of its ZIRP corner. It appears to recognize that negative real interests rates are helping speculators and allowing corporations to prop up the stock market by funding share buybacks. But loan demand remains slack, a clear sign that more stringent rate policy is not warranted out of any concern of real economy pressures. The Fed instead appears to want to latch on to any semi-good run of economic data to increase rate levels, so it will have wriggle room to drop them in the event of a crisis.

The model plots the movement of capacity utilization and unemployment. The model has two limit lines that act upon the increasing utilization of labor and capital. One for Effective Demand (basically labor share) and one for Profit Maximization (equation in graphs). The utilization of labor and capital moves toward the limits during a business cycle to increase profits. Once the movement hits the limits, profits are further increased by only moving downward along the limits, which means that capacity utilization will decrease as unemployment falls. This pattern has existed for decades before a recession. When the plot starts to pull away from the limits, a recession is beginning.

Here is the model from a year ago. 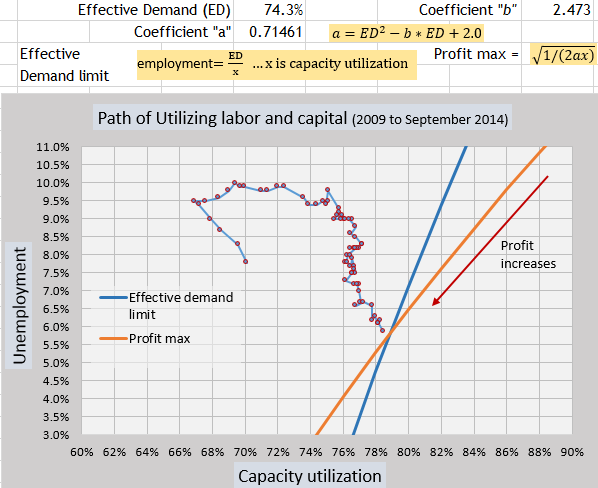 When I saw the plot reaching the limit lines last year, I wrote…

So here is the model with data since September of 2014. The coefficients seen at the top are the same in both graphs for easier comparison. The coefficients though can change if labor share was to significantly change. 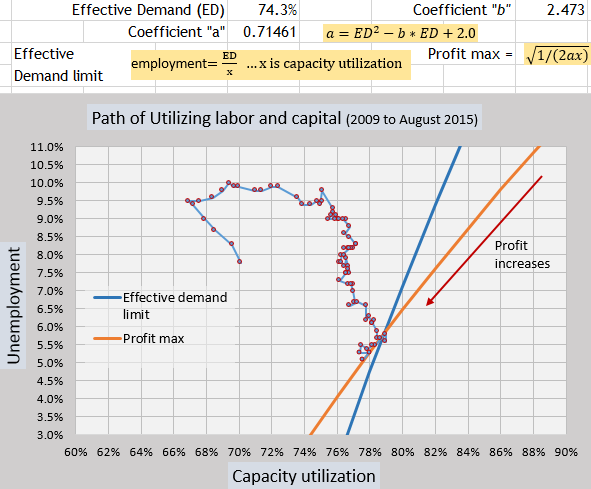 So the Fed decides this week whether they should raise the Fed rate or not. They are encouraged by the low unemployment number. Yet, from my perspective, the economy is very close to the end of the business cycle and too sensitive to tightening of monetary policy. The Fed could push the economy into a recession with a Fed rate rise. Basically, the Fed can no longer raise the Fed rate during this business cycle. It is too late.

According to the graphs, the natural rate of unemployment would be where the plot touches the limit lines. In this business cycle, it appears to be around 5.6%. So we have already passed the natural rate of unemployment. It is doubtful that we will see much if any inflation as conditions just do not support inflation with low interest rates promoting supply vis-a-vis weak labor share of income.

So the Fed is seeing that unemployment will drop further, and they expect some rise in inflation. However, if they are expecting a few more years of growth in this business cycle… I beg to differ.

In order to extend the life of this business cycle, the Fed should really not liftoff the interest rate.