This is Naked Capitalism fundraising week. 604 donors have already invested in our efforts to combat corruption and predatory conduct, particularly in financial realm. Please join us and participate via our Tip Jar, which shows how to give via check, credit card, debit card, or PayPal. Read about why we’re doing this fundraiser, what we’ve accomplished in the last year, and our third target, funding our guest bloggers.

The US debate over income inequality in the 1980s and 1990s focused on the growing disparity between the earnings of the skilled, the unskilled and the super-rich. After the global crash, the decline in labour’s share of national income has been added to these concerns. This column presents an alternative explanation for this decline, arguing that limited substitution possibilities between capital and labour combined with the acceleration in the pace of labour-augmenting technical change raises the effective labour-capital ratio. The policy implications of this alternative explanation are profoundly different from those currently circulating.

The US debate over income inequality in the 1980s and 1990s focused on the growing disparity between the earnings of skilled and unskilled workers and the earnings of the super-rich. Since 2000 and especially after 2007, however, the decline in labour’s share of national income (See Fig 1) has been added to these concerns.

There are several plausible reasons for this development — globalisation, automation, weak bargaining power of labour, political capture, higher markups — but the natural starting point for explaining factor income shares is the theory of the functional distribution of income enumerated by John Hicks (1963) and Joan Robinson (1932) in the 1930s. This theory, which emphasises the ease with which capital and labour can be substituted, points to a combination of weak investment and technical change that has made workers more productive as the explanation for recent declines in labour’s share in income.

Figure 1. Share of labour compensation in US national income 1969-2014 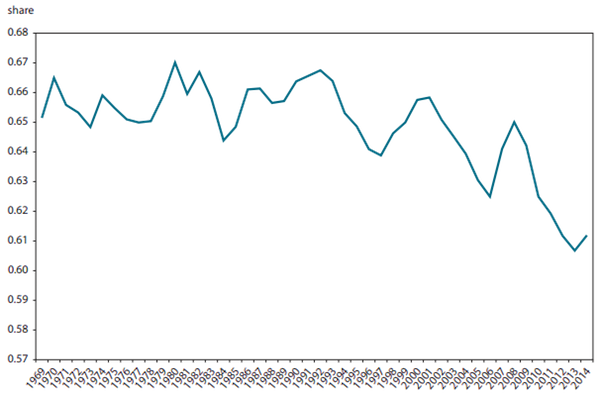 In this case, a percentage increase in the quantity of capital relative to labour will be more than offset by the percentage decline in the relative price of capital, and capital’s income share will fall.

Based on the assumption that substitution possibilities are considerable and σ is greater than one, several leading recent authors have claimed that a rise in the quantity of capital relative to the quantity of labour (capital deepening) is responsible for the decline in labour’s share in US income. This view is reflected in papers by Elsby et al. (2013) and Neiman and Karabarbounis  (2014), and most famously in the book, Capital in the Twenty-First Century, by Thomas Piketty (2014). The explanations for capital deepening offered by these authors differ, but all three imply that since capital and labour are highly substitutable, the increased relative supply of capital has been met with a less than proportional decline in its relative price. Specifically, Elsby et al. claim the reason is an increase in capital intensity due to the offshoring or more labour intensive production, Neiman and Karabarbounis claim that the declining price of investment goods has raised the capital-labour ratio, and Piketty claims capital deepening has taken place due to a decline in the growth rate in the face of a constant saving rate.

But this line of explanation suffers from two basic flaws. First, it is at odds with the preponderance of studies (see surveys by Chirinko 2008, Rognlie 2014, and Lawrence 2015) that have found that the substitution possibilities between capital and labour are relatively low and σ < 1. In this case capital deepening would actually increase rather than reduce labour’s share.

Correcting these two flaws provides an alternative line of explanation for the decline in labour’s share:

In recent work (Lawrence 2015), I present empirical support for this alternative explanation.

Using regressions that produce estimates of both the elasticity of substitution between capital and labour and the magnitude of capital and labour augmenting technical change, I find that the elasticity of substitution is generally less than one in many US industries as well as the US economy as a whole. The estimates also imply the effective capital-ratio has actually fallen in many industries because the measured rise in the (physical) capital-labour has been more than offset by an acceleration in the pace of labour augmenting technical change.

The policy implications of this alternative explanation are profoundly different from those advocated by Piketty. Piketty advocates taxing capital. But if σ is < 1, increasing taxes on capital could lead to further reductions in labour’s share! Paradoxically, with σ < 1, policies that increase investment and the supply of capital could achieve more equal distributions of income. Accordingly lower taxes on capital and a progressive consumption tax could be the most effective approach to boosting investment and reducing US income inequality.

Antras, P (2004), “Is the US Aggregate Production Function Cobb-Douglas? New Estimates of the Elasticity of Substitution”, B E Journal of Macroeconomics 4(1).

Elsby, M W L, B Hobjin, and A Sahin (2013), “The Decline of the U.S. Labour Share”, Brookings Papers on Economic Activity, Washington, September.

Young, A T (2010), US Elasticities of Substitution and Factor-Augmentation at the Industry Level, Working Paper, College of Business and Economics, West Virginia University.