This is Naked Capitalism fundraising week. 613 donors have already invested in our efforts to combat corruption and predatory conduct, particularly in financial realm. Please join us and participate via our Tip Jar, which shows how to give via check, credit card, debit card, or PayPal. Read about why we’re doing this fundraiser, what we’ve accomplished in the last year, and our third target, funding our guest bloggers.

The tangle of loose lending to tight oil Gillian Tett, FT. No derivatives, I trust.

The Financial Crisis: Lessons for the Next OneAlan S. Blinder and Mark Zandi, Center for Budget and Policy Priorities. Victory lap.

“Third, Treasury dismisses again several outlandish ideas to continue borrowing money after running out of cash-management steps to remain under the debt limit, including one that would have President Barack Obama invoke the 14th amendment to issue debt above the limit or to mint a large-denomination platinum coin to raise cash without exceeding the debt limit. Neither of those steps are legal, the Treasury said.”

What if rates never rise? FT

The Politics of Distrust WSJ

Trump faces backlash for blaming ex-President George W. Bush for 9/11 USA Today. He transgressed the unwritten law, so they nailed his head to the floor. How soon we forget:

We’ve known for years now that George W. Bush received a presidential daily briefing on Aug. 6, 2001, in which he was warned: “Bin Laden Determined to Strike in U.S.” We’ve known for almost as long that Bush went fishing afterward.

What we didn’t know is what happened in between the briefing and the fishing, and now [Ron] Suskind is here to tell us. Bush listened to the briefing, Suskind says, then told the CIA briefer: “All right. You’ve covered your ass, now.”

Of course, Bush doesn’t deserve sole blame. But this “he kept us safe” talking point is such a steaming load.

What is a democratic socialist? Bernie Sanders tries to redefine the name. WaPo

Two new polls show Liberals headed toward win Montreal Gazette. The polls showed the same for Labour in the UK

The final push: How the leaders are spending the last weekend of the election campaign Globe and Mail

‘He’s at peace’: ‘Zen’ Stephen Harper is calm in the homestretch despite Trudeau emergence Vancouver Sun

In Unpredictable Canadian Elections, Plurality Is More Important Than Popularity NYT. First past the post again…

Inside the murky world of China’s official economic numbers Telegraph

#TPP will make it illegal to unlock or jail-break your phone https://t.co/6hJJl0r8OZ pic.twitter.com/gYQI19sXNG

Drone users will have to register with the U.S. government Daily Dot. That was fast.

Can Facebook solve the family attribution gap? Venturebeat. That is, how can venture capital help to arrange for children to manipulate their parents into buying stuff?

Decadence and Madness at the Top: Inside Britain’s Secretive Bullingdon Club Der Speigel

Companies to Workers: Start Saving More—Or We’ll Do It for You WSJ. Because the 401k has been such a success….

The subprime ‘unicorns’ that do not look a billion dollars FT

The Hostile Email Landscape Liminality. Emailer oligopoly rejects mail from self-hosted servers. “This isn’t how the internet is supposed to work.”

The Good, the Bad, and the Ugly The Power Of Narrative. Opera, then Alice Miller. Silber is always worth a read.

Relive the famed ‘Bush Push’ game with the USC and Notre Dame players on the field Los Angeles Times. I don’t like football much, anymore, but this story weaves great quotes into a timeline beautifully. 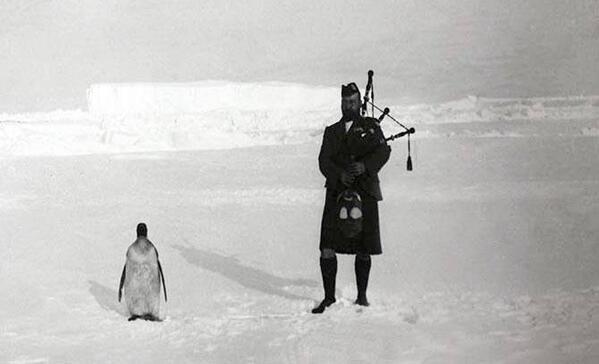 A member of the Scottish National Antarctic Expedition plays the bagpipe for a penguin, 1904.