This is Naked Capitalism fundraising week. 1182 donors have already invested in our efforts to combat corruption and predatory conduct, particularly in the financial realm. Please join us and participate via our donation page, which shows how to give via check, credit card, debit card, or PayPal. Read about why we’re doing this fundraiser, what we’ve accomplished in the last year, and our fifth target, more original reporting.

For Many Norwegians, Ghosts Fill a Void New York Times

Photographs of the Gowanus Canal Atlantic (furzy mouse). Reminds me of a classic commercial we featured yesterday.

Like Everything Else, Alternative Energy Requires Cheap Oil FPIF (resilc)

IS IT FOOLISH TO MODEL NATURE’S COMPLEXITY WITH EQUATIONS? Wired. Lambert: “And economies”?

How Salad Can Make Us Fat New York Times. I must confess, I can’t relate to this at all. The foods that I gather most people regard as acceptable hedonism I’ve long regarded (as in for 40 years) as seriously unhealthy. Having to eat a burger and fries would be a punishment, not a reward.

Telegraph Portugal Claim Busted Zolo Street. Good thing we didn’t get readers and ourselves all wound up posting on it. Mind you, we are not saying it is all sweetness and light in Portugal, merely that the Telegraph story is way ahead of the state of play.

Hillary Clinton: We Lied. The Aim Of Our War On Libya Was Regime Change Moon of Alabama (resilc)

The Real Afghanistan Surge is in Heroin Production and Tripled Opium Cultivation since the US military arrived/ UN and US Government documents Meryl Nass, M.D. (furzy mouse). Not news if you’ve been paying attention…

What Hillary Clinton Got Wrong About Edward Snowden FPIF (resilc)

Democratic race gets real in Iowa CNN. Translation: all the carpetbaggers are pouring in.

Sanders contrasts his record with Clinton’s at Iowa dinner Reuters

The Man Who Bought the Clintons: the Political Business of Terry McAuliffe Counterpunch (Li)

It’s Time for the US to Return to “Socialist” Policies OpEd News (Glenn F). Sanders needs to start quoting that great socialist Eisenhower.

OLEG DERIPASKA AND IVAN GLASENBERG CAN’T GET IT UP, THE ALUMINIUM MARGIN, THAT IS – BUT IS THE LOVE AFFAIR OVER? John Helmer. A commodities casualty

Why every aspect of your business is about to change Fortune. What this reveals is the feeble responses of incumbents, both ideologically and politically, given that many of these “disruptive” new services flagrantly break the law. And it’s not as if capitalism hasn’t been here before. For instance, in the 1900s, there was a strong effort by businessmen and leading economic thinkers of the time as to how to throw sand in the operation of the market…for the health of businesses! See Michael Perelman’s Railroading Economics, or for that matter, Karl Polyani’s The Great Transformation for examples.

The Saker interviews Cynthia McKinney Vineyard of the Saker (Glenn F). Anyone who can make Rumsfeld squirm is worth listening to. 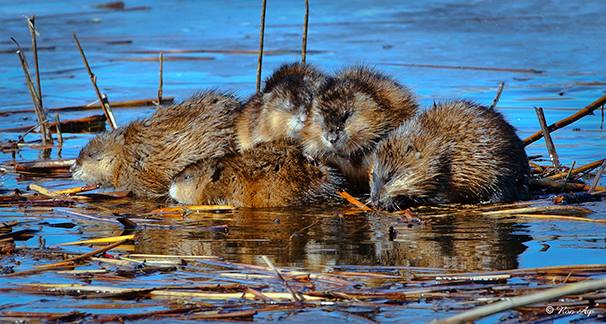 And Frosty Zoom recommended this video on muskrats and beavers highly: