Orrin Hatch: “Right now, it is not clear whether the TPP meets the high standards laid out in the TPA statute. Congress is still waiting to see the final details of the agreement” [The Hill]. Hatch, however, does not mention loss of sovereignty under ISDS, most likely to resonante with his conservative constituency.

“The [leaked Clinton campaign memo], titled ‘The Importance of the African-American Vote,’ suggested this plan to woo the community is a crucial part of Clinton’s overall election strategy. It described Clinton’s platform as ‘the most comprehensive agenda to help African American families get ahead and stay ahead’ [Yahoo News]. “Clinton’s plan to win the African-American vote is two-pronged. It includes an aggressive ground game and policies that the campaign believes are tailored to the community’s interests, including a commitment to address concerns about police violence.” Oh? Let’s take a look at that.

“Hillary Clinton Meets With Mothers Of Trayvon Martin, Jordan Davis, Michael Brown And Tamir Rice” [HuffPo]. “‘It doesn’t matter what color we are, I felt that she really understand where we are coming from,’ Rice’s mother said.” Clinton plays to her strengths in small groups.

“‘To [younger women] it seems obvious and indisputable that if Clinton doesn’t win, some other woman will, and soon,’ one Democratic strategist [snort] and Clinton supporter said, adding that Clinton seems ‘too old, too moderate and too caught up in another time'” [The Hill].

“Cambridge Analytica, which is partially owned by hedge fund manager and Cruz donor Robert Mercer, has taken microtargeting in a new direction for its clients in the United States. The young company persuaded hundreds of thousands of Americans to take a 120-question test that measures the “big five” personality traits. These traits — extroversion, openness, conscientiousness, agreeableness and neuroticism — are broad, stable psychological characteristics that shape individuals’ behavior and attitudes. The company then matched the personality profiles to the thousands of data points it collected on each U.S. voter and created an algorithm that Nix claims can predict a voter’s personality based on the data alone, without anyone having to take a test” [Yahoo News].

“Rubio received donations from execs of hedge funds invested in Puerto Rican debt before opposing bankruptcy” [Fusion]. “According to public campaign-finance documents, at least six executives of hedge funds that hold Puerto Rican debt have donated to Rubio’s presidential campaign. Rubio appears to be among the only major presidential candidates who has explicitly opposed bankruptcy reform for Puerto Rico.” Ka-ching.

WaPo’s fact-checking operation gives Sanders four Pinocchio’s for saying the Kochs will achieve their spending goals in the 2016 election [WaPo]. (Via @froomkin).

“Can Washington’s Most Interesting Egghead Save the Senate?” [The Atlantic]. Ben Sasse (R-NE) doesn’t actually sound crazypants, but the “Republicans are the party of ideas” trope is exceedingly well-worn. Daniel Patrick Moynihan, Margaret Chase Smith, and Robert Byrd are his role models….

MBA Mortgage Applications, week of October 30, 2015: “Mortgage applications are settling down after spiking and dipping sharply in volatility tied to new disclosure rules put in place last month” [Econoday]. Down 1% on the week, up 20% on the year.

ADP Employment Report, October 2015: “ADP is calling for a 182,000 rise in private payrolls, a respectable gain that is right at expectations and that would likely keep in place chances for a December FOMC rate hike” [Econoday]. But: “ADP reported non-farm private jobs growth at 182,000. The rolling averages of year-over-year jobs growth rate remains strong but the rate of growth continues in a downtrend” [Econoday].

Gallup U.S. Job Creation Index, October 2015: “Gallup’s U.S. Job Creation Index [the perception of hiring] averaged plus 32 in October, the sixth month in a row in which the index has held at this level. This is the highest index score since Gallup began measuring employees’ perceptions of job creation at their workplaces in 2008″ [Econoday]. “In October, 43 percent of workers said their employer was hiring workers and expanding the size of its workforce, and 11 percent said their employer was letting people go and reducing the size of its workforce.”

Ag: “US ethanol production soared last week at their fastest in five months, defying low margins identified by sector giant Archer Daniels Midland – and with the potential for further increases to come” [Agrimoney]. Turning oil into plants, and plants into gasoline. That makes sense.

“[I]f the economy doesn’t pick up appreciably, the FED has little in the tool box, so there will likely be a need for fiscal stimulus..which means more borrowing..but that is for another day” [Across the Curve]. This after a segment of bond geek musings that I couldn’t penetrate, but that sounded interesting. Readers?

“It’s not just OPEC, but most entities with oil related income seem to have only partially cut back on spending as prices collapsed, perhaps ‘betting’ on a price recovery. This includes US states with oil and gas revenues, oil companies, and individuals collecting royalty checks” [Mosler Economics].

Honey for the Bears: ““The reality is that the public has not been involved this time around, unlike in the late ‘90s,” [Peter Thiel] said. He added that if there were a bubble today, he believed it had arisen because of prolonged low interest rates that had spurred a huge wave of investing across sectors [New York Times]. In other words, and as I’ve been saying, all this garbage about “unicorns” and “startups” and “founders” (!) is the result of free money sloshing around from QE. It’s a bubble, and a grotesquely skewed malinvestment of capital, to boot, just as surely as the “foreclosure crisis” was, with its subdivisions full of houses with styrofoam pediments and no insulation thrown up so the FIRE sector could collect its fee fees.

“This U.S. earnings season is on track to be the worst since 2009 as profits from oil & gas and commodity-related companies plummet” [Bloomberg].

Newly-elected Republican governor Bevin will probably dump the state ObamaCare exchange, Kynect. But then the Federal Exchange could be used. It’s less clear that he’d dump Medicaid expansion. Then again: “[Medicaid is] not meant to be a lifestyle. It really isn’t. The point of it is to provide for those who truly have need” [Politico]. As if an over-55 would put the family house at risk from estate recovery as a life-style choice. Vicious and delusional.

“[T]he [“Wellness] program’s biggest critics say the programs are yet another way to push more costs onto employees, and even worse, potentially a backdoor way to discriminate against less healthy workers by making them pay more if, for instance, they fail to meet a goal of lower cholesterol” [New York Times]. “For lower-income employees, who may feel more pressure to participate, there is the potential for another type of discrimination.” Another form of backdoor underwriting! Which ObamaCare encourages.

“Patients of color are more likely than non-Latino white patients to say doctors are unconcerned about their health and don’t see them as equal, according to a study produced by Emory University on patients’ trust of physicians” [Latin Post].

“How do fraudsters ‘cash out’ stolen credit card data? Increasingly, they are selling in-demand but underpriced products on eBay that they don’t yet own. Once the auction is over, the auction fraudster uses stolen credit card data to buy the merchandise from an e-commerce store and have it shipped to the auction winner. Because the auction winners actually get what they bid on and unwittingly pay the fraudster, very often the only party left to dispute the charge is the legitimate cardholder” [Krebs and Security]. Amazingly intelligent, especially (I assume) for the non-credentialled.

“Goldman Sachs announced last month that its investment in a Utah preschool program had helped 109 “at-risk” kindergartners avoid special education. The investment also resulted in a $260,000 payout for the Wall Street firm, the first of many payments that is expected from the investment” [New York Times]. “Yet since the Utah results were disclosed, questions have emerged about whether the program achieved the success that was claimed. Nine early-education experts who reviewed the program for The New York Times quickly identified a number of irregularities in how the program’s success was measured, which seem to have led Goldman and the state to significantly overstate the effect that the investment had achieved in helping young children avoid special education.” Shocker!

“Ohio votes down legalizing pot for medical, recreational use” [WaPo]. What the coverage doesn’t mention (and NC readers know) is that Ohio voters rejected handing control over growing and selling marijuana to a monopoly (of referendum sponsors (!!). In other words, a victory for strange bedfellows.)

“Soda is on the verge of becoming the liquid cigarette” [Guardian]. How Mexico imposed a tax on soda.

Martin Shkreli: “Nobody’s lowered their prices … why should I?” [Business Insider]. Indeed!

“[Investor Chris Sacca] also noted that people in the Bay Area tended toward ‘upspeak,’ the use of a rising inflection in speech. While men can get away with it, he said, women who adopt that speech pattern are not taken seriously” [New York Times]. So women should invest in speech therapy, as opposed to men stop being jerks who can’t listen (the vast majority of Silicon Valley squillionaires being men).

“All six editors and all 31 editorial board members of Lingua, one of the top journals in linguistics, last week resigned to protest Elsevier’s policies on pricing and its refusal to convert the journal to an open-access publication that would be free online” [Inside Higher Ed]. “As soon as January, when the departing editors’ noncompete contracts expire, they plan to start a new open-access journal to be called Glossa.” This is a big deal, actually.

“In 2013, the rate of non-fatal occupational illnesses, including common musculoskeletal disorders like carpal tunnel syndrome, was 18.8 per 10,000 workers in the US. For poultry workers, it was 104.2” [Quartz].

“In some cases, the most intimate questions a person is asking—about health worries, relationship woes, financial hardship—are the ones that set off a chain reaction that can have troubling consequences both online and offline” [The Atlantic]. What happens if you Google “need rent money fast”? A chain of events that kicks people who are already down.

“Staring at computers at night is frying your brain. Here’s one easy fix” [Vox]. I’ve tried this, but it doesn’t work on my iPad without jailbreaking. Yves tried it, and didn’t like it.

“The news around the cryptocurrency world has been pretty bright lately. Even if bitcoin still has a stigma in the public eye, the hype around the potential of bitcoin’s underlying mechanics – the so-called blockchain – has positively exploded.” [Wall Street Journal, ” BitBeat: Bitcoin Surges Past $400 on Back of the New ‘Shining Star'”]. Halo effect?

“Fear Not: You Can Use Chrome to Bring Stars Back to Twitter” [Wired]. Well, I avoid Google. “One Account, All of Google” gives me the creeps. In fact, it’s exactly what I don’t want.

“A new study suggests that schizophrenic people in more collectivist societies sometimes think their auditory hallucinations are helpful” [The Atlantic]. I’m resisting filing this under 2016….

Readers, feel free to contact me with (a) links, and even better (b) sources I should curate regularly, and (c) to find out how to send me images of plants. Vegetables are fine! Fungi are deemed to be honorary plants! See the previous Water Cooler (with plant) here. And here’s today’s plant (Isabel): 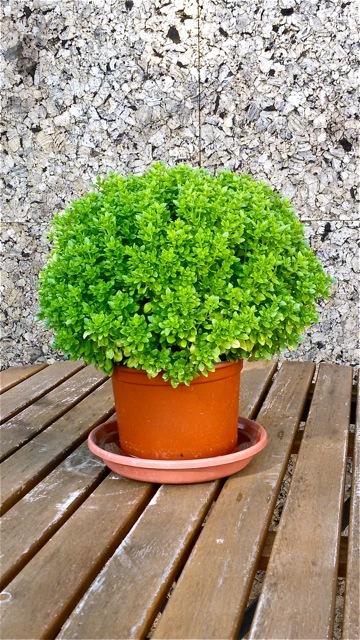 If you enjoy Water Cooler, please consider tipping and click the hat. Winter is here, I need to keep buying fuel, and I need to keep my server up, too. And thanks so much for the donations during the annual fundraiser, which I immediately socked into infrastructure. They are much appreciated, both practically, and as signs that you enjoy the work.