The university that taught generations of American leaders that their manifest destiny is to make war on uncivilized people around the world is having a bad time of it, now that the US has lost the last four straight; and the losers are streaming in for their take of the manifest. Streaming into Europe, that is, but not into Harvard University, nor the state of Massachusetts, nor the United States.

It was comical when Timothy Colton, Harvard’s professor of Russian studies, turned out, a year ago, to be paid by a branch of the Pentagon to spy on the body movements of President Vladimir Putin. It was laughable last week when the Harvard Centre of European Studies, financed by the Seagram businesses, engaged Radoslaw Sikorski, the ousted Polish foreign minister, to teach. “The pursuit of ‘Veritas,’ as in Harvard’s motto, is always exciting,” the university quoted Sikorski as saying.

But now comes Professor Niall Ferguson, on Rupert Murdoch’s tab, to declaim that the reason for the terrorism which has stormed the boulevards and entertainments of Paris is that the French, and the European Union (EU), deserve it because they have let their guard down, inviting the barbarians in by “complacency”, “secularism”, and “decadence”. Like the Romans deserved the Visigoths and the Vandals, according to this Harvard version of the history of civilization, the Europeans deserve “the uncannily similar processes destroying the European Union today.”

Ferguson is titled the Laurence A. Tisch Professor of History. The Tisch endowment at Harvard which fills Ferguson’s pay packet came from the Loews conglomerate of New York; it made its money selling cigarettes (Kent, True), CBS media, insurance, hotels, and Bulova watches. Ferguson was appointed to his Harvard job after proclaiming that moderately successful as the British empire had been in the past, it was up to the US “to do a better rather than worse job of policing an unruly world than their British predecessors… I believe the world needs an effective liberal empire and that the United States is the best candidate for the job.” We Americans, the Harvard Gazette reported him as saying, not only can afford to “play a more assertive global role, but [can]not afford not to.”

Opinions like these are common, and as cheap as True cigarettes and Bulova watches. Ferguson didn’t qualify for his Harvard chair by believing them or broadcasting them. It’s when the professor identifies the university’s title and tribune for claiming that it’s his historical research which makes the views credible that one of the gates of our civilization has been opened, then shut. Call that gate Enlightenment, science, objectivity, evidence.

The London Times published Ferguson’s essay on Sunday, charging a subscription fee. The Boston Globe gave it away for free. The title gives Ferguson’s game away: “Like the Roman empire, Europe has let its defences crumble.” 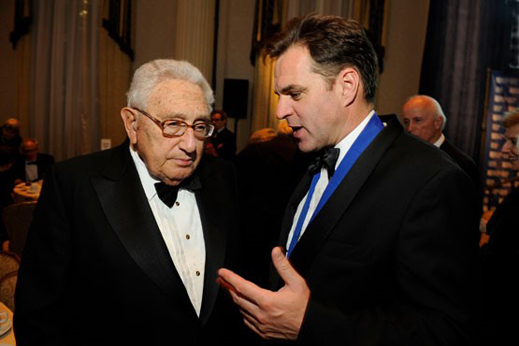 Ferguson, photographed with Henry Kissinger in 2011

Never mind Ferguson’s raid on two hundred years of research into ancient Rome since Edward Gibbon’s Decline and Fall. Ferguson knows the research — not even Harvard hires ignoramuses and nincompoops. So for a university professor to write as Ferguson claims to write about Gibbon’s lesson for today requires a deliberate falsification of the record.

What is missing from Ferguson’s version are two large pieces of evidence, one ancient, one contemporary. The first is that in purporting to explain why Rome fell to the barbarians, Ferguson omits to explain why Constantinople succeeded in defeating them. The history of the Byzantine empire is an 1,100-year success story – more than double the length of the Roman empire or the British empire; the longest-running empire in civilized history as Harvard University knows it. And the Byzantine trick had next to nothing to do with Christianity, Islamophobia, sexual continence, or heavy military spending. It had everything to with disbelief in the doctrine of manifest destiny.*

The second piece of evidence missing from Ferguson’s version of history is the 70-year record of the US Government wars which financed and armed the jihadists, and deployed them for regime change from Afghanistan to Bosnia, Kosovo, and Russia, and then to Egypt, Libya, Syria. As each of these wars has been defeated, their mercenary armies, camp followers, and baggage trains have moved on. They are now at the gates of Europe, as Ferguson reports unoriginally. How the failures of Washington warmaking despatched them there is missing from his tale, and so from the lesson he draws.

Since the US is the supreme commander of the North Atlantic Treaty Organization (NATO) mounting the defences of Europe, and the military occupier still of Germany, how is it possible not to define the jihadist war against Europe as a NATO threat under Article 4 and Article 5. These are the treaty provisions requiring the signing states to act in concert when an attack against one means an attack against all. This makes the jihadist war in Europe a US responsibility, as well as a charge on American taxpayers. But they don’t want to pay, and if opinon polls were reported of what they, as well as the Europeans really think, they know where the blame lies. How is it possible to ignore the fact that half of the states of the US have publicly announced they refuse to accept refugees from Syria? 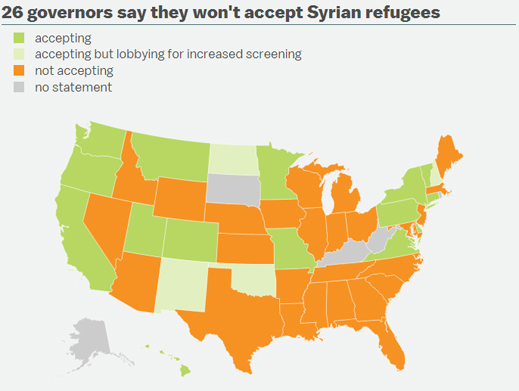 According to the governor of Ferguson’s state, the Syrian stream is an unacceptable security risk. “‘I think at this point in time we would have to be very cautious about accepting folks without knowing a lot more about what the federal government’s plan looks like,. I would certainly say no until I know a lot more than I know now. The safety and security of the people of the commonwealth of Massаchusetts is my highest priority,’’ he said. ‘‘I’m always going to be willing to at least hear what the federal government has to say. As a public official, that’s my job. Hearing what they have to say does not mean saying yes.’’

What Ferguson is ignoring is that the weakness of Europe’s defences reflects the US priority that NATO should be attacking Russia, and bringing down the Kremlin. This was the war which the Obama Administration launched in the early weeks of last year, when it changed the regime in Kiev, and announced “Fuck the EU”. It’s not Gibbon’s lesson to be learned now, according to Ferguson’s version of history, but the lesson the Roman legions, consuls, and emperors taught in their time– you lose the war, you pay for it. Only that’s not exactly what is happening now either. Chancellor Angela Merkel wants Germans to pay – they won’t; she’s lost. President Barack Obama wants the Europeans to pay, and Russia too.

This is a military and political campaign which is being lost now just as certainly as its predecessors. It’s also a doctrine which is as doomed to fail as ancient Rome’s was, when the Byzantine doctrine went on to prosper for a millennium. Now, and for the foreseeable future, Europe has a choice which the manifest destinonians of Harvard and Washington don’t want to mention, or their paymasters allow – it’s the Byzantine choice.

Let the last line be Jugurtha’s, one of the greatest barbarians of North Africa, the king of Numidia (Algeria, Tunisia) who fought the Roman empire between 112 and 106 BC. “Rome’s a city for sale and bound to fall as soon as it finds a buyer,” he said. For Rome insert Berlin, London, Paris, Brussels, The Hague, or Washington, DC.”

FOOTNOTE: Ferguson needs to study Edward Luttwak, The Grand Strategy of the Byzantine Empire, published in 2009 by Harvard University Press.