Well, no; having lifted up just one tiny corner of the AML plan, this blogger doesn’t particularly agree. The company agent part of the supervisory framework, at least, is spectacularly inept. Lest you should think that’s an isolated occurrence hyped up by an overexcitable blogger, it’s part of a pattern. In 2014, noted supranational specialists Transparency International coldly surveyed the lunatic sprawl of the UK AML plan in its entirety and concluded:

Fast forward to October 2015, and HM Treasury, unburdening itself in its first UK national risk assessment of money laundering and terrorist financing, has joined the chorus about the gruesome flaws in the UK’s AML framework:

The effectiveness of the supervisory regime in the UK is inconsistent. Some supervisors are highly effective in certain areas, but there is room for improvement across the board, including in understanding and applying a risk-based approach to supervision and in providing a credible deterrent. The large number of professional body supervisors in some sectors risks inconsistencies of approach. Data is not yet shared between supervisors freely or frequently enough, which exposes some supervised sectors where there are overlaps in supervision.

This doesn’t look like particularly strong stuff, but “room for improvement across the board” is about as blunt as a modern Treasury official is ever allowed to get.

In a particularly apposite illustration of the UK regime’s sprawling incomprehensibility, Transparency International last year identified 28 different UK organisations tasked with AML supervisory roles. By contrast, HM Treasury can only find 27, this year. Has some agency quietly given up the ghost, or is someone miscounting?

From the point of view of broad-brush conclusions about the likely efficacy of the UK AML regime, the error diagnosis hardly matters. If merely enumerating the agencies officially responsible for anti-money-laundering supervision presents so much difficulty, tracking down the money launderers themselves is going to be quite a “challenge”.

At least HMT promises to recommend additions to UK’s Anti-Corruption Action Plan, which had better get out of the planning stage, sometime.  For a start, HMT might as well add Transparency International’s whole enormous 2014 to-do list (pages 17-21 here) to the next iteration of the Plan.

As a next step, it’s this blogger’s humble opinion that HMT needs to pay some extra attention to Trust and Company Service Providers (TCSPs). TCSPs are just one tiny corner of the vast and messy UK AML tapestry. They are the chaps who, when it all goes pear-shaped, turn out to have been incorporating the companies used in vast international money laundering schemes, and never have much to say about who they’ve been working for.

What does HMT have to say about TCSPs? Well, something, at least. For a start, HMT are aware (p51, footnote) of another absurdly vast constellation of AML supervisors that have a piece of the TCSP pie:

Wisely, HMT make no claim that their 15-member list of functionaries is exhaustive. They do have some inkling that this profusion could be a problem, though:

6.138 TCSPs may be supervised by one of a number of different supervisors, (financial services providers, legal service providers and accountancy service providers may all be TCSPs). This presents challenges in ensuring supervision of the sector is consistent. For example, ensuring an appropriate and proportionate application of the fit and proper regime, and/or professional requirement certification, across the sector has been raised by supervisors and NGOs such as Transparency International, as challenging.

The glut of supervisors leads to a giant knowledge gap that HMT have spotted:

6.139 The number of TCSPs registered with a supervisor for AML/CFT and operating in the UK is currently unknown as professional body supervisors do not uniformly record whether firms supervised by them for other reasons are also TCSPs.

That’s just the onshore registered TCSPs active in the UK, though. There are other giant knowledge gaps, unacknowledged by HMT. To adopt a Rumsfeldian intonation, HMT doesn’t even know what it doesn’t know.

First, HMT apparently has no inkling that many onshore unregistered TCSPs may be active in the UK. To discover who’s registered, and who isn’t, you have to

The cumulative consequence of these known and unknown unknowns, as dear old Donald Rumsfeld would put it, is a certain dissonance between the HMT’s own TCSP risk ranking on the one hand (p 12): 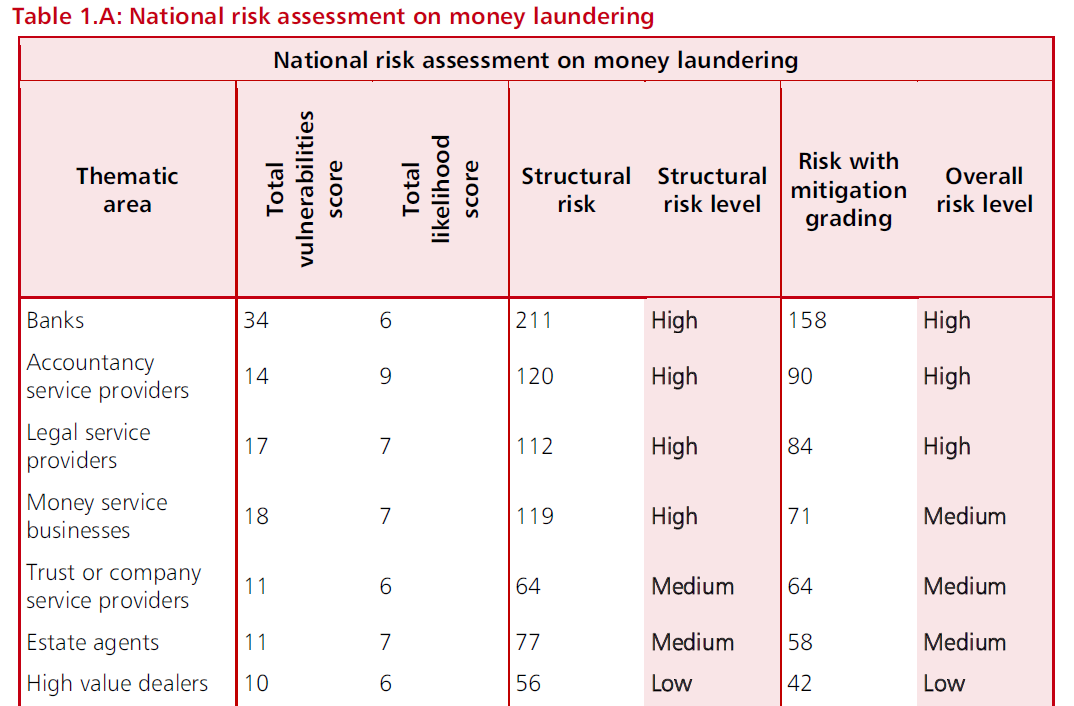 …and the headlines, on the other:

Across all these stories, a relatively small number of see-no-evil company agents, onshore and overseas, turn out to play key roles, frequently alongside Baltic banks. In that context, the absence of a British connection, in this recent story, the biggest of the lot, is unexpected:

That British absence is likely to be temporary, though.

Here’s why: the names of Grigoriev and Igor Putin (Vlad’s cousin) crop up in the OCCRP’s 2014 coverage of the £13Bn Moldovan moneylaundering scam (“The Laundromat”) that was also reported in The Independent.  The Laundromat definitely did involve UK companies and agents, as well the inevitable stray New Zealander, Ian Taylor.

But Grigoriev, Igor Putin and Moldova crop up again in this month’s $46Bn Commersant report, too. A mostly intelligible computer English rendering of it is available here and here. The MO, dodgy debt claims enforced by corrupt Moldovan courts, is the same as described in the OCCRP’s piece.

In short, it looks like a dead cert that this new $46Bn monster is another manifestation of the very same 2014 Moldova/UK “Laundromat”.  It’s just turned out to more than twice as big, in the mean time.

That is about as big as money laundering schemes ever get, and might even provide the main explanation for the existence of a group of 20,000+ mass-produced opaque shell companies easily detected on the UK company register. From the BNE piece:

The newspaper claims that [Alexander] Grigoryev is accused of channelling prime assets out of banks about to be declared insolvent, as well as closing real estate deals on behalf of bankrupt credit institutions.

However, the biggest scam he is accused of running affected over 60 small banks and about 500 individuals, constituting a money laundering and outflow operation with a record turnover of over RUB1 trillion a year.

For comparison, Kommersant notes that to date, the largest busted laundering scheme in Russia, run by Sergey Magin, had a turnover of RUB169bn.

The scheme could involve Moldovan, Lithuanian, and Estonian banks servicing Russian and offshore shell firms that channelled money out of Russia under the pretence of issuing compensation for fake trade deals with local nationals.

According to the anti-money-laundering services of Moldova, in 2010-2013 alone Moldovan courts withdrew $18.5bn worth of compensation from Russian resident firms, which in reality was a cover-up for illegal capital flight.

Just maybe, TCSPs active in the UK are a bit more of a money laundering risk than HMT thinks. Looking at the last few years worth of headlines, it appears to be high time for HMT to take more of an interest in what the UK’s TCSPs, official and unofficial, onshore and offshore, are getting up to, and help get some political backing for reform.