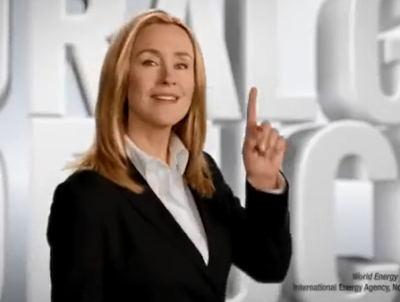 American Petroleum Institute spokesmodel Brooke Alexander (aka Lying Pantsuit Lady) saying the one true thing she knows — “America is number one in bringing planet-destroying carbon to the world.” She thinks that’s a good thing, which is false.

More excellent reporting by Neela Banerjee at the award-winning site InsideClimate News on the “Exxon Knew” story. Turns out, they all knew, all the big oil companies. Their industry group, the American Petroleum Institute (API), had been running a task force for years in the late 1970s and early 1980s, at which scientists from all of the big oil companies shared their information.

(Side note: Of course that had to be true. Just like any industry, Big Oil is a very small club at the top. What matters to one of the companies, especially one as big as Exxon, matters to all of them. Their execs all know each other, go to each other’s parties, ride each other’s jets to St. Andrews and Val-d’Isère, share names of the best Confirmation and Bar Mitzvah caterers — so of course when one gets a bug in the behind about maybe CO2 is dangerous, they talk about that bug until they’ve decided what to do. This story was just waiting to be dug out. Kudos to Ms. Banerjee for doing the digging.)

InsideClimate News with the details (my emphasis):

Exxon’s Oil Industry Peers Knew About Climate Dangers in the 1970s, Too

Members of an American Petroleum Institute task force on CO2 included scientists from nearly every major oil company, including Exxon, Texaco and Shell.

Beginning in 1979 the American Petroleum Institute, the nation’s most powerful lobbyist, together with the country’s largest oil companies ran a task force to monitor and share climate research.

The American Petroleum Institute [API] together with the nation’s largest oil companies ran a task force to monitor and share climate research between 1979 and 1983, indicating that the oil industry, not just Exxon alone, was aware of its possible impact on the world’s climate far earlier than previously known.

The group’s members included senior scientists and engineers from nearly every major U.S. and multinational oil and gas company, including Exxon, Mobil, Amoco, Phillips, Texaco, Shell, Sunoco, Sohio and Standard Oil of California and Gulf Oil, the predecessors to Chevron, according to internal documents obtained by InsideClimate News and interviews with the task force’s former director.

An InsideClimate News investigative series has shown that Exxon launched its own cutting-edge CO2 sampling program in 1978 in order to understand a phenomenon it suspected could harm its business. About a decade later, Exxon spearheaded campaigns to cast doubt on climate science and stall regulation of greenhouse gases. The previously unpublished papers about the climate task force indicate that API, the industry’s most powerful lobbying group, followed a similar arc to Exxon’s in confronting the threat of climate change.

Just as Exxon began tracking climate science in the late 1970s, when only small groups of scientists in academia and the government were engaged in the research, other oil companies did the same, the documents show. Like Exxon, the companies also expressed a willingness to understand the links between their product, greater CO2 concentrations and the climate, the papers reveal. Some corporations ran their own research units as well, although they were smaller and less ambitious than Exxon’s and focused on climate modeling, said James J. Nelson, the former director of the task force.

“It was a fact-finding task force,” Nelson said in an interview. “We wanted to look at emerging science, the implications of it and where improvements could be made, if possible, to reduce emissions.”

The group was initially called the CO2 and Climate Task Force, but changed its name to the Climate and Energy Task Force in 1980, Nelson said.

A background paper on CO2 informed API members in 1979 that carbon dioxide in the atmosphere was rising steadily, and it predicted when the first clear effects of climate change might be felt, according to a memo by an Exxon task force representative.

In addition, API task force members appeared open to the idea that the oil industry might have to shoulder some responsibility for reducing CO2 emissions by changing refining processes and developing fuels that emitted less carbon dioxide….

Those prediction weren’t far off. The whole ICN report is worth reading, but this, however, is especially damning:

At [the urging of task force member Henry Shaw, Exxon’s lead climate researcher in the late 1970s], the task force invited Professor John A. Laurmann of Stanford University to brief members about climate science at the February 1980 meeting in New York. Shaw and Laurmann had participated in the same panel at the AAAS climate conference in April 1979.

Like many scientists at the time, Laurmann openly discussed the uncertainties in the evolving climate research, such as the limited long-term sampling data and the difficulty of determining regional effects of climate change, according to a copy of his presentation attached to the meeting minutes [pdf].

Still, Laurmann told his audience several times that the evidence showed that the increase in atmospheric CO2 is likely “caused by anthropogenic release of CO2, mainly from fossil fuel burning.”

In his conclusions section, Laurmann estimated that the amount of CO2 in the atmosphere would double in 2038, which he said would likely lead to a 2.5 degrees Celsius rise in global average temperatures with “major economic consequences.” He then told the task force that models showed a 5 degrees Celsius rise by 2067, with “globally catastrophic effects.”

Here are those conclusions in full, from the next-to-last page of the report linked in the quote:

• WHETHER THERE ARE GROUNDS FOR IMMEDIATE RESPONSE TO THE THREAT DEPENDS ON THE VALIDITY OF THE LONG MARKET PENETRATION [of new energy sources] TIME CONCEPT.

• EVEN IF THE LATTER IS APPLICABLE, PRESENT DAY SIGNIFICANCE OF THE IMPACT DEPENDS STRONGLY ON CHOICE OF A FUTURE [social] DISCOUNTING FACTOR.

Page 10 of the pdf is damning as well. This behavior borders on the criminal, wouldn’t you say? Or maybe crosses it, given the consequences we now face, by the distance of a hemisphere or so. About those consequences:

“I know what you’re thinking, Mr. & Ms. American. You’re thinking, ‘Do we have until 2020 to stop making Big Oil richer, or can we wait till 2040 to take them on?’ Now, to tell you the truth, no one really knows. But being this is civilization-ending CO2 emissions we’re talking about, which will blow your grandchildren right back to the stone age while you watch, you’ve got to ask yourselves a question — Do you feel lucky?”

Nope, still not feeling lucky. Perhaps it’s time to act decisively and treat this like the emergency it is. After this gets going, life won’t be fun for anyone, even the wealthy who caused it. After all, if Val-d’Isère is all melted by then, where will they ski?