Decapitated Rattlesnake Bites Itself Imgur (Chuck L). Anti-antidote, not for the squeamish.

What will not be addressed at the climate change conference in Paris Heiner Flassbeck. Guurst: “”Bleak’ does not come close.”

70 years after the Nuremberg trials: “Report makes case for prosecuting US war criminals” WSWS (Judy B)

The spread of Wahhabism, and the West’s responsibility to the world New Statesman (Steven D)

Trump repeatedly interrupted by protesters at campaign rally Th eHill (furzy mouse). I don’t understand why the Republican establishment that is desperate to get Trump out of the picture haven’t figured out that the way to dent him is to get him to react badly (which he has done occasionally. A way to do that is get protestors to push Republican hot button issues where Trump is on the wrong side. They need to get some bad video clips out of Trump on which they can capitalize.

Trump calls for Macy’s Christmas boycott The Hill (furzy mouse). You cannot make this stuff up.

Who’s responsible when small children shoot themselves? myAJC. Lambert: “Sadly, this is how Darwin works.”

GunTV, America’s First 24-Hour Firearm Shopping Channel, Set for 2016 Newsweek. I really do have to emigrate. And in the meantime, stock up on Kevlar.

Macy’s Imprisons Minority Customers and Extorts Them for Bogus Fines: Suit DNAinfo. Lambert: “And not for the first time!“

Antidote du jour. From a series sent by Diane P:

31-year-old Luiz Higa Junior of São Paulo , Brazil , tells PetaPixel that his golden retriever, Bob, is a little less than two years old. In the beginning, he just had Bob, a cockatiel and a parakeet.

“Since the beginning I put them together to see their behavior,” he tells us. “It was nice, so I decided to have them play together sometimes during my free time.”

He then added more birds and a hamster to the group, and his Instagram account has been steadily growing in popularity since. Higa’s photos show the group posing, playing, exploring, and resting together. 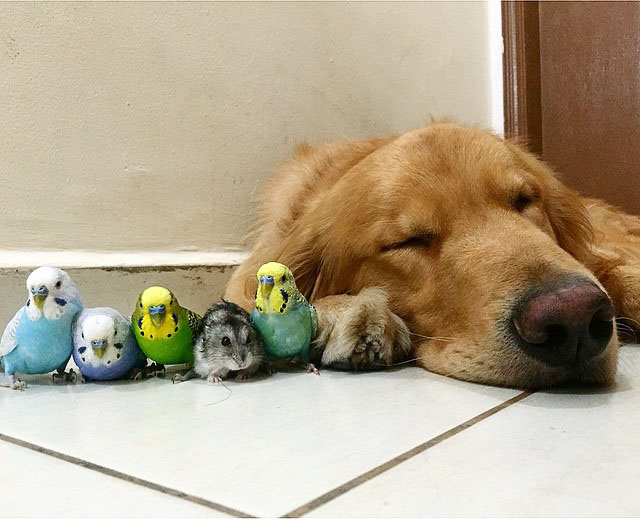