By Jérémie Cohen-Setton, a PhD candidate in Economics at U.C. Berkeley and formerly an economist at HM Treasury. Originally published at Bruegel

What’s at stake: Larry Summers made an important speech a few weeks ago at a Peterson Institute conference on the productivity slowdown arguing it is hard to see how recent technical change could both be a major source of dis-employment and not be associated with productivity improvement.

Adam Posen writes that it is a real puzzle to observe simultaneously multi-year trends of rising non-employment of low-skilled workers and declining measured productivity growth. Either we need a new understanding, or one of these observed patterns is ill founded or misleading. In my view, we should trust labor market data more than GDP data when they come in conflict—workers are employed and paid, and pay taxes (usually) so they get directly counted, whereas much of GDP data is constructed. Thus productivity, as the residual of GDP minus capital and labor accumulation, is much less reliable than the directly observed count of workers.

Larry Summers writes that it’s almost impossible to disagree with the view that the price indices overstate inflation and therefore the quantity indices understate quantitative growth. It is significantly more contestable whether that process has accelerated or not, but I don’t find myself with an alternative way of thinking about the dis-employment through technology which seems to be a pervasive phenomenon and that leads me to assign more weight to the mismeasurement hypotheses than I otherwise would. The other explanations could be that there really isn’t a set of dis-employment events or that there is a production function that can generate higher productivity together with slower productivity and more dis-employment.

Jan Hatzius and Kris Dawsey write that increased measurement error might indeed account for most of the ¾pp decline seen in consensus estimates of trend productivity growth over the past decade. The shift in the IT sector’s center of gravity from general-purpose IT hardware to specialized IT hardware, software and digital content—where it is far harder to measure quality-adjusted prices and real output—may have resulted in a growing statistical understatement of the technology contribution to growth. 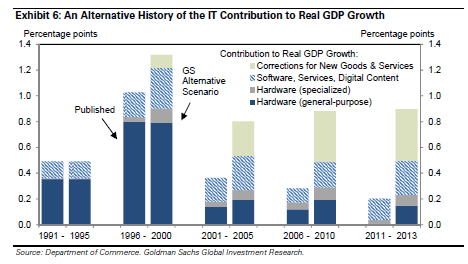 John Fernald writes that David Byrne at the Board of Governors plus various co-authors of his have done a lot of work on that and suggest that, indeed, this is important and it probably adds up to one-tenth or two-tenths of GDP. So, that on its own will not change the productivity numbers. Remember, the magnitude of what we need to explain is a slowdown after 2003 or 2004 of two percentage points on labor productivity growth and maybe 1.25 or 1.5% on TFP. So, one- or two-tenths won’t close that gap.