Clinton, in Iowa: “”You know, I think Bernie’s giving a speech today in New York about what he wants to do to shut down the big banks. Everybody who’s looked at my proposals says my proposals are tougher, more effective, more comprehensive. Because, yeah, I take on the banks, but remember, part of what caused the mess we had in ’07-’08 were not the big banks. It was Lehman Brothers. It was Bear Stearns. It was AIG, the giant insurance company. I want to go after everybody who poses a risk to our financial system,” Clinton said to applause from the more than 500 people crowded into the lobby of Sioux City’s historic Orpheum Theater” [Des Moines Register]. Chutzpah! And very Rovian: Assault your enemy’s strength.

Clinton: “There needs to be a rival organization to the NRA of responsible gun owners” [Raw Story].

“Mr. Sanders’s fundraising has surpassed expectations. Lacking the donor network the Clinton family built over a quarter century on the national stage, Mr. Sanders has nearly matched her fundraising haul. In the final quarter of 2015, he raised more than $33 million, compared to her $37 million. In the third quarter, the Sanders campaign collected $26 million; the Clinton campaign, $28 million” [Wall Street Journal]. Without PAC and SuperPAC money, or the “ginormous and ever-evolving hairball of tangled and conflicted personal and institutional relationships” that you get with the corrupt Clinton dynasty, either.

“The [Illinois] Sanders delegate [slate], taken as a whole, could be considered the Democrats who Howard Dean famously called members of the “Democratic wing of the Democratic party” during his 2004 Democratic presidential campaign” [Chicago Sun-Times]. “That the Sanders slate brings him organization expertise is important because under Illinois Democratic delegate selection rules, delegate positions will be allocated to “fairly reflect” the preference of primary voters for president.”

“…. Trump then polled the audience on the issue….” [WaPo]. That’s amazing. I’m trying to recall another case in a Presidential campaign.

“Republican presidential candidate Jeb Bush said on Tuesday that his brother, George W. Bush, is still ‘very popular’ and could join his struggling campaign” [Raw Story]. Another dynasty to vote for….

ADP Employment Report, December 2015: “ADP is calling for unusual strength in Friday’s employment report, at 257,000 for private payrolls which is far outside Econoday’s consensus at 190,000 and well outside the high estimate for 227,000” [Econoday]. And “well above expectations [Econintersect]. “The rolling averages of year-over-year jobs growth rate remains strong but the rate of growth continues in a downtrend (although insignificant this month).”

Gallup U.S. Job Creation Index, December 2015: “December’s job creation index averaged plus 30, down slightly from the monthly record high of plus 32 recorded for six consecutive months in 2015. The plus 30 yearly average for 2015 set a new high” [Econoday]. “Government hiring increased two points from November to plus 27, tying the record high found in October 2015.”

ISM Non-Mfg Index, December 2015: “This report continues to be consistent and solid, underscoring the strength of the nation’s domestic-based economy” [Econoday]. And “Important internals improved, however, and remain in expansion” [Econintersect].

PMI Services Index, December 2015: “Growth in new orders came in at its slowest rate since the weather disruptions in January last year” [Econoday].

Honey for the Bears: “I expect the U.S. economy to sputter in 2016. That’s because the economy faces a deep structural problem: not enough demand for all the goods and services it’s capable of producing” [Robert Reich, LA Progressive]. “I’d feel more optimistic if I thought government was ready to spring into action to stimulate demand, but the opposite is true. The Federal Reserve has started to raise interest rates—spooked by an inflationary ghost that shows no sign of appearing. And Congress, notwithstanding its end-of-year tax-cutting binge, is still in the thralls of austerity economics.” Isn’t “spooked” making an assumption about good faith on the part of the Fed?

The Fed: “5 Things to Watch in the Fed’s December Minutes” [Wall Street Journal]. The minutes drop at 2:00PM, my deadline. So I guess people can see if these 5 things came true! Also: “fed minutes preview (dec 2015)” [Livesquawk].

” When a prison closes, what happens to the prison town?” [Christian Science Monitor].

“It is unlikely that Officer Jason Van Dyke would have been charged with murder if there weren’t video of him shooting Laquan McDonald sixteen times as he walked away. In large part, that’s because fellow police officers appear to have lied to cover it up” [Salon].

“It is a systematic problem,” says Craig Futterman, a University of Chicago Law School professor and civil rights attorney. “When there’s a police shooting, or when there’s an allegation of misconduct or brutality, the institutional response is to circle the wagons, denial, and cover up. And it’s throughout the entire organization. It’s not just sort of a code of silence” amongst officers but “really a phenomenon of narrative control and lying” from the top down.

And we’re not seeing a lot of whistleblowers, either.

“Strip away the rhetoric, and [Cuyahoga County prosecutor Timothy McGinty] has made a clear statement about police conduct: If police perceive a threat to their lives then they’ve de facto justified their actions regardless of context, even if it ends with taking the life of a child. That includes situations like the Rice shooting, where police chose to create a confrontation, rather than manage an encounter” [Business Insider]. The problem here is that racist perceptions can also be perceptions of threat where none exists, so you can see what we just legalized here.

“Since 2005, Kansas City police have been involved in 47 fatal shootings, or about four a year, according to an analysis by The Star, which began compiling a database of the shootings 11 years ago” [Kansas City Star]. “When The Star recently compared Kansas City to 11 other cities, including larger ones like Denver and Milwaukee, it found that Kansas City had the third-most officer-involved fatal shootings per capita from 2005 through 2014. Only St. Louis and Cleveland recorded more.”

“The Chicago shootings and why so many police calls involving the mentally ill end in death” [WaPo]. The idea is that cops are “poorly trained,” but it seems to me they are doing what they were trained to do.

” Emanuel hires connected D.C. law firm for Justice probe” [Crain’s Business Review]. ” Wilmer Hale is one of the 25 largest firms in the country and is representing Baltimore in that city’s investigation by the Justice Department. The Washington D.C. firm has 14 offices but no presence in Chicago.”

Chicago is hiring the same lead partner as Baltimore: Jamie Gorelick, chair of Wilmer Hale’s regulatory and government affairs practice, who knows Mayor Rahm Emanuel from the years they both worked in the Clinton administration. She was deputy attorney general between 1994 and 1997 and before that general counsel for the Defense Department. Later, she became vice chairwoman at mortgage lender Fannie Mae. She’s no stranger to high-profile investigations: before Baltimore, she represented Puerto Rico’s police department when the feds investigated civil rights abuses there and Duke University when players on its lacrosse team were accused of rape.

Tories slammed for ‘appalling’ decision to push through crucial housing law at 3am [Mirror].

“President Obama’s move to tighten gun restrictions follows a string of high-profile shootings and surging sales of firearms — and some experts believe Tuesday’s executive action will only heighten demand” [The Hill]. “Gun manufacturers have seen their stocks climb in recent days as sales pick up.” Self-licking ice cream cone…

“Obama measures wouldn’t have kept guns from mass shooters” [WBAL]. So, the only real effect is to further empower the gun complex?

On Obama’s tears (full transcript) [The New Yorker]. “[T]he President started to tear up…. He wiped away a tear, this one from below his left eye, and then he pressed his lips with his thumb and forefinger… [He] gesticulated with his index finger and brushing away another tear, this one from below his right eye.” I can’t make up my mind whether this is hagiopgraphic, pornographic, or both. Anyhow, heck, John Boehner cried all the time, about anything or nothing, and the question of the sincerity of his “display of emotion” never arose. And if Boehner was sincere, so what?

“Twitter shares hit new low on rumored shift to 10,000-character tweets” [Guardian]. That’s about three pages of text. I can’t decide whether this is the stupidest idea ever or a wonderful opportunity for long-form tweeting. Or, alternatively, it could be evil…

What’s really changing here, then, is not the length of the tweet. It’s where that link at the bottom takes you when you click on it—or, rather, where it doesn’t take you. Instead of funneling traffic to blogs, news sites, and other sites around the Web, the “read more” button will keep you playing in Twitter’s own garden

“Facebook has taken over from Google as a traffic source for news” [Fortune].

Jacobin interviews Ammon Bundy (nice get!) [Jacobin]. Bundy: “We are people taking a stand for our land rights.”

“Required Reading: The Malheur National Wildlife Refuge Was Taken Over Once Before, Back in the 19th Century” [The Stranger]. And the Paiutes weren’t happy when the ranchers did it, either.

“The [Southern Poverty Law] Center is an Alabama-based nonprofit which is actively and vociferously loathed in certain conservative circles. However, it is one of the best sources of empirical data and information about extremist political activity in the United States because the discrimination watchdog agency and think tank employs former reporters and editors, investigators, law enforcement and security analysts” [WaPo]. “Loathed”? One can only wonder why….

“In its first scientific risk assessment of the much-debated class of pesticides called neonicotinoids and how they affect bees on a chronic long-term basis, the EPA found in some cases the chemical didn’t harm bees or their hives but in other cases it posed a significant risk. It mostly depended on the crop” [ABC]. All I know is that eight or nine years ago I saw honeybees regularly, and now I hardly see any. Could be a local effect, of course.

“How much of the mainstream media coverage given to COP21 and the Paris Agreement mentioned the mysterious exemption given to the US’s massive military and security machine? None” [The Ecologist]. “Not only are these emissions entirely outside the UNFCCC process, but a ‘cone of sillence’ somehow prevents them from even forming part of the climate change discourse.”

“The CEO of your company has probably already earned your 2016 salary this year” [WaPo].

“The Market Socialist Idea” [London School of Economics]. “The key idea, according to British political scientists such as Julian Le Grand and David Miller, is that market socialism retains the market mechanism while socializing the ownership of capital. The thrust of this social-democratic approach is that markets not only promote efficiency but also freedom and democracy thus giving wide political appeal.”

“Wage Gap May Help Explain Why More Women Are Anxious and Depressed Than Men” [Mailman School of Public Health].

Cringeley’s 2015 and 2016 predictions, including the end of engineering workstations in favor of the cloud [Cringely]. 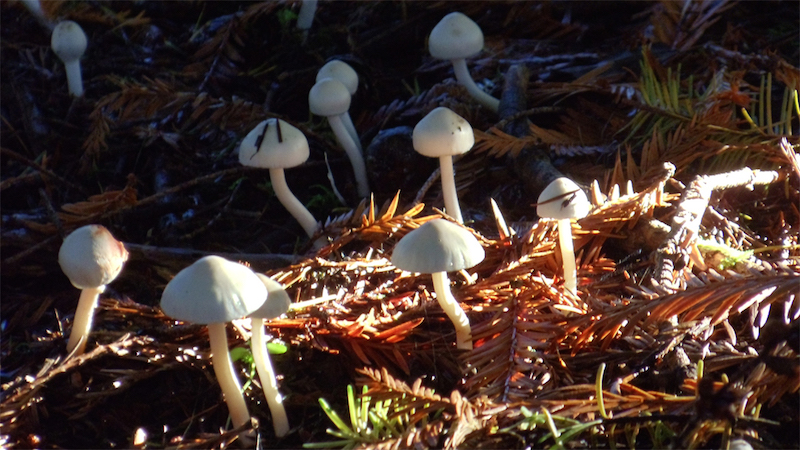 Mushrooms in the light! But I don’t know what they’re being fed…