Monetary Base and the Balance Sheet of the Fed.

The previous post examined the balance sheet of the central bank:

Now that we have an understanding of how the balance sheet of the Federal Reserve works, it is possible to go into the details of how the Fed operates in the economy in terms of monetary policy.

To understand what the Fed does, we first need to define the monetary base and see how it relates to the Fed’s balance sheet. We will quickly look at the difference between monetary base and money supply, and we will also look more carefully at what reserves are.

The Monetary Base and the Money Supply

The monetary base (aka “High-Powered Money”) is defined as:

In its widest meaning “in circulation” means any Federal Reserve Notes (FRNs) outside the Federal Reserve banks and any Treasury-issued cash outside Treasury. Economists prefer to use a narrower definition and we will use it here. Cash in circulation is any currency outside Treasury, Fed, and private banks (“vault cash”)—what is held by “the public.”

Technically, cash means currency and coins. The Fed and Treasury use the word “currency” to mean paper money only.  Currency in circulation includes mostly FRNs, but also some Treasury currency (United States notes, silver certificates) and national bank notes (issued prior to the creation of the Fed in 1913) that the Treasury will take in payment at face value. The distinction between coins and currency is mostly statistical and does not have any analytical power. As we will see later, the material of which something is made is irrelevant to determine if it is a monetary instrument. We will use the word cash and currency interchangeably.

To simplify, the U.S. monetary base can be reduced to:

That is the monetary base is the sum of reserve balances, vault FRNs, and FRNs outside the Fed and Banks (the FRNs in your wallet, at the Treasury, held by foreigners).

Until recently, currency in circulation was the largest component of the monetary base and it grew steadily to almost $1.4 trillion today, most of which are FRNs, and “between one-half and two-thirds of the value of U.S. currency in circulation is held abroad.” The global financial crisis led a large increase in reserve balances from about $24 billion on average from January 1959 to August 2008 to about $2.5 trillion today (Figure 1). 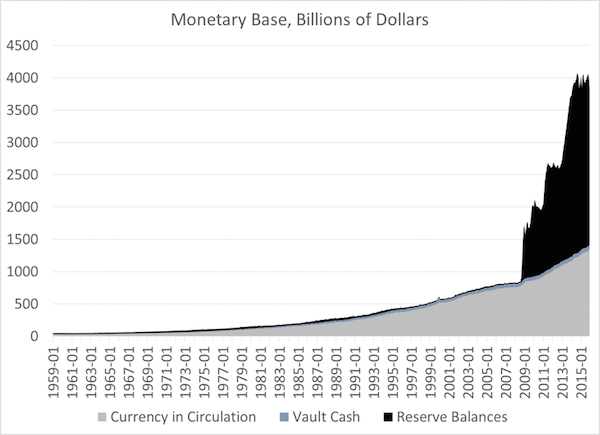 The monetary base is not the same thing as the money supply. Money supply means money held by non-bank economic units and outside the Treasury and other official foreign institutions. There are several ways to measure that and monetary aggregate M1 is the narrowest (Figure 2): 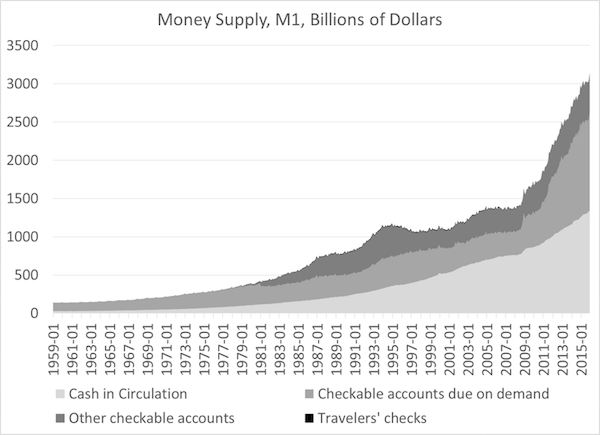 It is important to make a difference between the money supply and the monetary base because the central bank has no direct influence on the money supply. The Fed does not deal with the public directly, private banks do. Even for FRNs, private banks are in charge of injecting FRNs in the economy and they do so only if customers want to withdraw cash. In a 2010 interview Chairman Bernanke noted regarding the announced purchase of $600 billion of treasuries (“quantitative easing”):

Translated in what we have seen above, he is saying that L2 has gone up dramatically but that M1 has not changed. The Fed did not issue FRNs to the public (L1 is not going up), it just credited the accounts of banks by buying treasuries from them and, as we have seen in the previous blog, banks can’t do much with reserve balances.

It is possible for reserve balances (L2) to go negative, i.e. the Fed allows banks to have an overdraft; however, the Fed expects that banks will close any overdraft at the end of each day. If a bank cannot do it, the Fed charges a very high interest rate (because the overdraft is a form of uncollateralized advance contrary to Discount Window advances) and, if the overdraft persists, the Fed may take a closer look at how the bank runs its business.

Total reserves can be decomposed into other categories than the form they take. One may also be interested in how banks obtained their reserves. The Fed is the monopoly supplier of reserves and there are two ways for the Fed to inject reserves:

Non-borrowed reserves have been the main source of reserves (Figure 4) because the Fed discourages the use of the Discount Window (interest rate is higher and Fed may increase supervision if a bank comes to the Window too often).  The stigma of going to the Window is so strong that, during the crisis, the Fed had to change its Discount Window procedures to entice banks that desperately needed reserves to come.

Finally, the total amount of reserves can be decomposed in terms of the use of reserves. Banks in the United States must have a certain proportion of reserves relative to the amount of bank accounts they issue:

You will sometimes encounter the word “free reserves,” which just means the difference between excess reserves and borrowed reserves. Our most important categorization will be the last one: excess vs. required reserves. 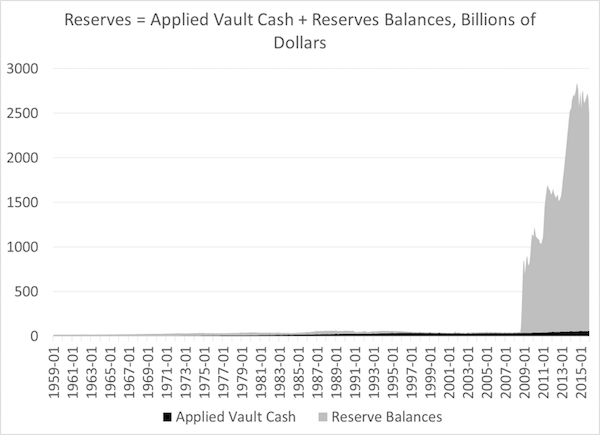 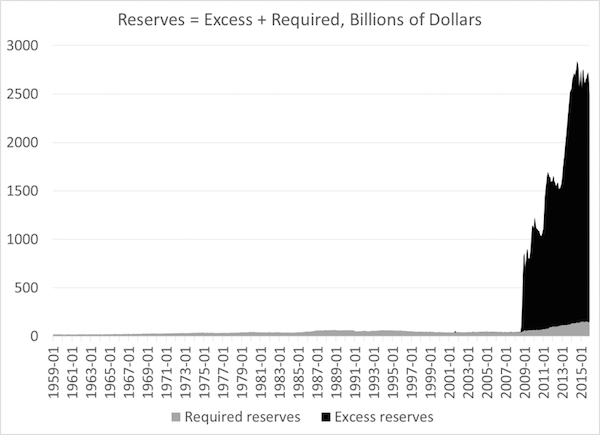 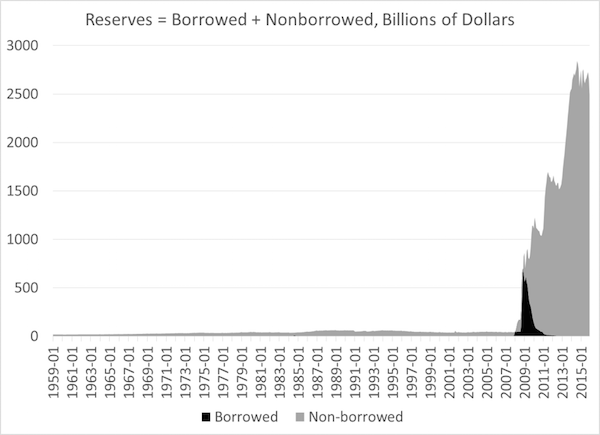 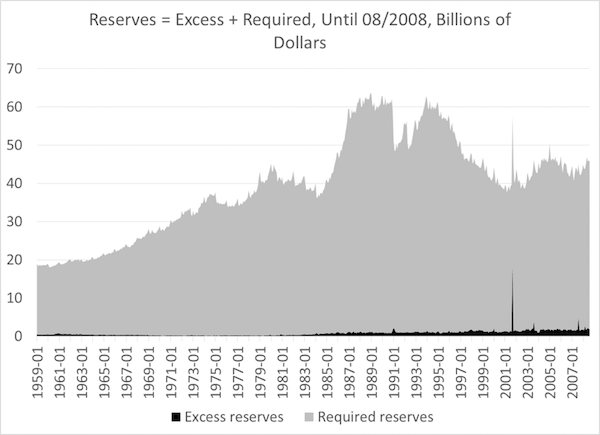 How does the monetary base change?

The monetary base will go up or down depending on what happens to the other items in the balance sheet of the Fed. Following the point that balance sheet must balance we have:

So monetary base will be injected when:

The monetary base will be removed when opposite transactions occur. Let’s take a few examples:

Case 1: The Federal Reserve buys T-Bills worth $100 from banks

You have just witnessed monetary-base creation: The central Bank credits the account of banks by typing “100” on the keyboard of a computer. The fed could also have printed bank notes (ΔL1 = +$100) but purchases from banks are done electronically because of convenience.

Assume that Dr. T still mails his income-tax paperwork with a check for the U.S. Department of the Treasury. The Department receives the check and brings it to the Fed (we will ignore TT&Ls because that would just complicate the analysis without adding any insights at this point. We will look at Treasury-Fed interactions in a later blog). The Fed sends the check to the bank of Dr. T. and so the bank debits the bank account of Dr. T by $1000.

The Treasury only has an account at the Fed so the following will occur when the $1000 are transferred (which would be the second step if TT&Ls were included in the analysis):

But that again begs the question: What is the offsetting accounting entry on the balance sheet of the Fed? It can’t be “Account of Dr. T: -$1000” because Dr. T does not have an account at the Fed.

The answer is that when the Fed receives the check, it has a claim on Dr. T.’s bank. The bank settles that claims by giving up reserves and the funds are transferred into the account of the Treasury. Interbank claims (claims between private banks, and between the Fed and private banks) are always settled with reserve balance transfers.

Note that you have just witnessed monetary-base destruction: TAXES DESTROY MONETARY BASE. The central bank deleted $1000 in the reserve balance and keystroked an increase of $1000 in the account of the Treasury.

Of course if the Treasury spends, then reserve balances are credited and if Treasury spends more than its taxes then there is a net injection of reserves: FISCAL DEFICITS (government spending larger than taxes) LEAD TO A NET INJECTION OF RESERVES. Keep that in mind for the next blogs.

As a side note, one may note that Dr. T’s balance sheet changes as follows when taxes are paid:

Can the Fed issue an infinite amount of monetary base?

Yes it technically can given that the monetary base is composed of liabilities of the Fed. In practice though, the ability to inject reserves is constrained by the objectives of monetary policy. As we will see in the next blog, if the central bank issues reserves regardless of the needs of banks, it won’t be able to achieve specific policy targets it sets for itself unless it changes its operational procedures (which it did during the recent crisis).

At the origins of the Fed, some constraints were also put on the type of securities that the Fed could buy or that banks could pledge as collateral with their promissory notes to get an advance from the Discount Window. There was a fear that the Fed would over issue monetary base given its broad monetary power. Here is the language of the preamble of the 1913 Fed Act states:

“To provide for the establishment of Federal reserve banks, to furnish an elastic currency, to afford means of rediscounting commercial paper, to establish a more effective supervision of banking in the United States, and for other purposes”

“Elastic currency” just means that the Fed is able to create (and withdraw) monetary base at the will of banks and the public. However, until 1932, the Fed operated under the Real Bills Doctrine (RBD). What that meant is that the Fed ought to only accept in A1 and collateral for A2, securities that were issued to finance private-sector production. The idea was that by tying monetary-base creation to production financing, the Fed would avoid inflationary tendencies that could come from an elastic currency. Monetary base (and so money supply as the thought of the time went) would grow in-sync with production.

In practice, RBD never worked out well for both theoretical and practical reasons. WWI led to a large amount of treasuries held by the Fed. The Great Depression led to the elimination of the doctrine and the 1932 Banking Act widened dramatically the type of securities the Fed could accept if needed. 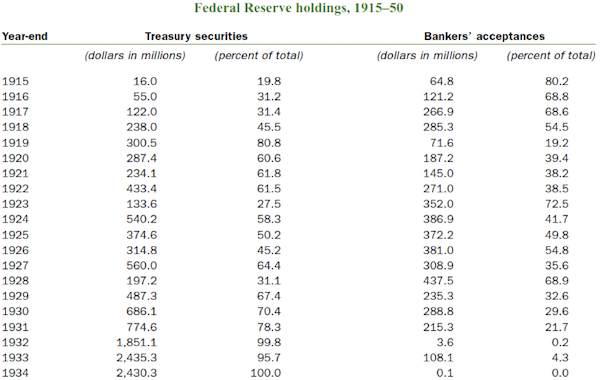 Source: Marshall’s Origins of the Use of Treasury Debt in Open Market Operations: Lessons for the Present

One of the problem of RBD is that it relied on private-indebtedness (issuances of securities by companies to finance production, “real bills”) for monetary policy to work. During a recession, banks did not have enough real bills to sale or pledge to the Fed because economic activity was dead so private issuance plunged. This is problematic because the scarcity of real bills limited the ability of banks to obtain reserves, just at the time when banks desperately needed some to counter bank runs and make interbank payments.

More recently, Dodd-Frank amended the Federal Reserve Act to constraint the capacity of the Fed to use “emergency power,” i.e. its ability to accept any type of securities from anybody. This was a reaction to the advance of funds provided to AIG that was not part of the Federal Reserve System and was not supposed to have had access to the Fed. It was also a reaction to the opaqueness of the Discount Window operations during the crisis and how questionable some of the transactions were.

The Fed needs to be able to fight panics and the ensuing liquidity crisis when everybody and every banks are trying to get their hand on the currency. This is why the Fed was created. It can only do so by being able to buy, or accept as collateral, a wide verity of securities.

This leads to a final important point. Given that the Fed provides a safety valve in the financial system, it may lead to moral hazard. Financial-market participants may take more risks knowing that, if things go south, the Fed will intervene to avoid a collapse of the financial system. As a consequence the Fed must do two things:

Unfortunately, these two conditions have not been met recently and moral hazard has increased dramatically.

The alternative is Andrew Mellon’s advice to Hoover: “liquidate labor, liquidate stocks, liquidate farmers, and liquidate real estate…it will purge the rottenness out of the system.” However, this belief in the self-cleansing of market mechanisms does not work, especially so in times of financial crisis and panic. More about that later.

Done for today! Next blog will dive into monetary-policy implementation by looking at the pre- and post-crisis monetary policy operations.