By Nick Cunningham, a Vermont-based writer on energy and environmental issues. You can follow him on twitter at @nickcunningham1. Originally published at OilPrice

The IEA struck a dour tone on the state of the global economy in 2016 in its latest monthly Oil Market Report, and even included a stark warning that the markets could “drown in over-supply” because of rising storage levels around the world.

Oil analysts have closely watched storage levels as an important barometer of where the markets were heading. The thinking was that inventories would rise as the supply overhang persisted, but storage facilities would then drawdown relatively quickly as production slowed. But in early 2015 a funny thing happened: Inventory levels surged to their highest levels in 80 years in the U.S., pushing oil prices down into the $40s per barrel.

By April, oil stocks began drawing down. Oil prices rose to the $60s and everyone thought a rebound was well on its way. But by the end of the summer, inventories began rising again and prices crashed. As of early 2016, there is a lot more pessimism as storage levels have barely declined from their 80-year highs of 490 million barrels in the United States. 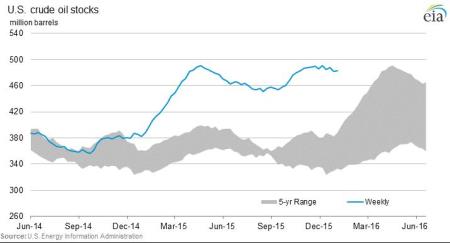 Around the world things do not look much better. The IEA says that the world added 1 billion barrels of oil into storage in 2015. Worse yet, global inventories could climb by another 285 million barrels this year before all is said and done. The stock build will likely “put midstream infrastructure under pressure and could see floating storage become profitable,” the Paris-based energy agency concluded. Last year the IEA warned that available storage could entirely run out.

OECD oil inventories are just shy of 3 billion barrels. In the fourth quarter of 2015, oil storage levels increased by 1.8 million barrels per day (mb/d), a record high for the time of year. In fact, the fourth quarter is normally a time that stocks are drawn down, not added, and there have only been four other times in which inventories climbed at the end of a given year.

The IEA cautioned that the lack of transparency and good data on storage capacity levels in most parts of the world make it difficult to “assess whether there is currently additional spare storage capacity outside of the US.”

In fact, oil tankers at several key trading hubs have had some difficulty unloading their volumes because of a lack of onshore storage capacity. In Europe, one important area to watch is the Amsterdam-Rotterdam-Antwerp (ARA) hub, an area that has seen tankers back up because storage onshore has “remained at close to full capacity amid difficulties moving product into central Europe.”

Adding to the storage woes will be the nearly two dozen tankers from Iran that have been sitting offshore holding Iranian crude that were trapped because of sanctions. They could soon set sail.

Despite the dire warnings that the world could soon run out of storage space, which would depress oil prices even further, market conditions do not currently reflect this phenomenon. While the market is in a state of contango, in which front-month cargoes are sold at a lower price than oil delivered in the future, the near-term prices are not discounted enough to justify floating storage. That is because there is actually still plenty of onshore storage capacity.

In short, there should not be a shortage of storage space for oil. If that is the case, there will two effects on prices. On the one hand, available storage should help avoid the catastrophic crash in oil prices to somewhere in the teens or as low as $10 per barrel, which one investment bank recently forecasted. If there is a place for oil to go, then the world will not “drown.”

On the flip side, ample storage space means the downturn could persist. If there is a place for oil to go, there is a “disincentive for countries to limit production” as Reuters puts it. It is possible that both of these effects happen at the same time: no deeper price crash from current levels, but a more drawn out recovery. Goldman Sachs summed up the situation in a recent research note. “With more outlets including storage, excess production can be maintained on a longer time horizon before surpluses saturate markets and breach logistical and storage constraints,” Goldman Sachs concluded. Only if storage levels fill up entirely would it “create an outright collapse in commodity prices, which is the basis of our $20/bbl oil scenario.”