Yves here. We pointed out in 2005 in The Incredible Shrinking Corporation, that corporate investment, then at a time when the economy was growing, was so low as to amount to disinvestment. We warned again about this problem in 2010 in a New York Times op-ed and recommended that companies be taxed on retained earnings that were not reinvested, as well as taxes to discourage companies from acting as financial speculators (which many multinationals do). The problem of underinvestment, which is the result of pervasive short-termism, is not going to get any better unless incentives for CEOs change.

American corporations borrowed more in the years following the Financial Crisis than ever before. Debt was dirt-cheap even for the riskiest borrowers, and they went out and sold bonds and borrowed from banks, and blew the proceeds on funding operating losses, buy each other out in a record-breaking wave of M&A, and buy back their own shares. And not enough went into productive investments that would help their businesses grow and thrive.

This has been one of the reasons the economic recovery has been so crummy. Business investment is crucial, and there just wasn’t enough. And now it’s getting even worse.

Over $1.8 trillion of US corporate bonds are rated below investment grade, having doubled since the Financial Crisis. But for these junk-rated borrowers, the costs of borrowing have been rising. At the bottom end, bonds rated CCC or lower sport an average yield of nearly 20%. These companies can no longer afford to raise money via bond offerings. At the upper end of the junk-bond field, just below investment grade, the average yield has risen to 6.5% from 4.5% in 2014. These companies can still borrow, but it’s getting much more expensive. Even investment-grade borrowers have seen their costs rise.

Just how difficult is it for junk-rated companies to issue bonds? January has been, according to S&P Capital IQ’s LCD HY Weekly, “the slowest start to any year since the Financial Crisis circa January 2009.”

The rising cost of debt “has to dull your willingness to invest going forward,” Rick Rieder, CIO of global fixed income at BlackRock told Bloomberg TV. As costs rise, US companies face even greater challenges investing – and that will put a drag on the economy, he said.

This comes in an environment where profit margins are under pressure, where sales of S&P 500 companies have been shrinking for an entire year, and where their net profits are likely to have declined for three quarters in a row. This is a toxic cocktail for business investment. And it has started to show up in the official numbers.

Orders for non-military capital goods excluding aircraft, a measure of investment in business equipment, fell 4.3% in December on a monthly bases, the sharpest drop in 10 months. They’re down 8.1% year-over-year.

This is what companies order to build and expand their businesses, update their technologies and equipment, become more competitive, and move the company forward. These orders, at $65.87 billion in December, were the lowest since October 2013 ($64.1 billion), then September 2012 ($64.5 billion), and November 2011 ($64.47 billion).

This was also the lower end of the range in 2006 and 2007, which speaks of long-term stagnation of business investment interrupted by violent cutbacks during the Financial Crisis. Neither QE nor ZIRP that made borrowing historically cheap, nor a soaring stock market, had any positive impact on business investment: 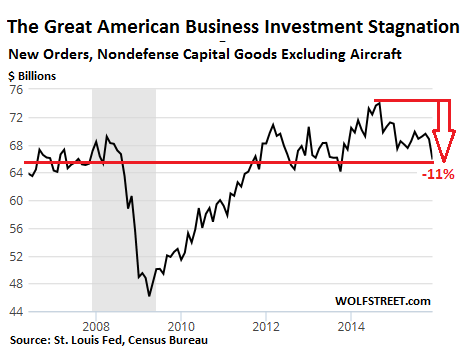 Note the mini-boom from October 2013 to September 2014, when capital goods orders hit an all-time peak of $73.9 billion, and when hope began to circulate that businesses would finally invest again, that the drought was over. But then it all came unglued, and investment in capital goods has since plunged 11%.

The broadest measure, orders of all durable goods, dropped 5.1% in December to $225.4 billion, the lowest since polar-vortex February 2015, and then October 2013. Excluding transportation equipment — volatile aircraft orders plunged 29.4% in December — durable goods orders still fell 1.2%. This pull-back was broad-based and not exactly encouraging.

But US companies can’t blame the “strong dollar,” which these days conveniently gets blamed for just about everything when blaming the weather won’t do. The “strong dollar” makes imported components and equipment cheaper and has no impact on domestically produced equipment. So it should have encouraged investment. But no.

Years of QE and ZIRP, instead of generating a tsunami of investment in productive activities, and thus economic growth, have pushed financial engineering – share buybacks and M&A – to new levels that have left corporate America more leveraged, more fragile, and more financially unstable than ever before. As companies are starting to grapple with the consequences of their financial engineering strategies in this environment, business investment is going to be relegated to an afterthought. And this will be a further whack-down for the already limping economy.

The credit market is in turmoil, and distressed corporate debt has reached Lehman-Moment levels. Read…  Ka-boom Goes the Bottom of the US Bond Market