There are several parts to a story that’s just starting to be told, the tale of the pressure applied by prominent and establishment Democratic women to get Sen. Elizabeth Warren to support Hillary Clinton. Part of that story is taking place in the present — the pressure is being applied now. And it now seems that part of that story may extend into the past — as earlier pressure not to “get in the way” (my characterization) of a possible, as-yet-unannounced Clinton run. The first part of the story is certain, the other, less so, though indications are beginning to emerge.

Let’s look at these two parts briefly, the present story and the past one, to see if some dots connect, and to see what other dots might be connected later, pending more data.

Keep in mind, this is an unusual primary for Democrats — we can choose an anti-Money revolution, or a woman president, but we can’t choose both, not this time. This complicates both the decision and the optics of endorsing Clinton, especially for women, and especially for women connected to the in-place Democratic establishment. If you haven’t figured out why, you’ll see in a moment. Read on.

The Present Pressure on Elizabeth Warren to Endorse Hillary Clinton

This present part of the story comes via a good story in The Hill. I encourage reading it all; I found all of it useful:

The lobbying campaign comes as the Democratic race between Clinton and Sen. Bernie Sanders (I-Vt.) is heating up going into the New Hampshire primary next week.

A group of Democratic ­senators is taking a bus tour of New Hampshire this weekend to stump for Clinton, and they want the liberal Massachusetts powerhouse to get on board. Clinton narrowly defeated Sanders in the Iowa caucuses earlier this week, but the Vermont senator is a heavy favorite to win New Hampshire.

A few of the senators have discussed with Warren the possibility of publicly backing Clinton. …
“I’m hopeful she’ll join us. I’m hopeful she’ll join the revolution that will allow us to come together to elect” the first female president, said Sen. Debbie Stabenow (D-Mich.), one of Clinton’s staunchest supporters.

Asked if she or other senators had approached Warren personally, Stabenow said, “We all talk about it,” but declined to reveal what Warren has said in response.

A Democratic aide said the Senate women have been “trying to do a little arm twisting in recent months.”

“Her role in this campaign would be valuable,” the staffer said. “I think she’s gotten more attention than most senators, and I think it would mean a lot.”

Other women in the Senate have thrown themselves wholeheartedly into the campaign for Clinton, which they see as a historic opportunity to advance women’s rights.

The question is, why would a senator who said this on the floor of the Senate (my emphasis)…

“A new presidential election is upon us. The first votes will be cast in Iowa in just eleven days. Anyone who shrugs and claims that change is just too hard has crawled into bed with the billionaires who want to run this country like some private club.”

… endorse Hillary Clinton? That’s a real question. And the answer is, “Of course she would endorse Clinton — unless she were speaking of Clinton.”

Which raises real questions, I think, about the reason many (but not all) establishment Democratic women are endorsing Clinton over Sanders. It’s certainly true that many think it is time for the first woman president and that Clinton should be that woman, in spite of her ties to Money — for example, ties to the Goldman Sachs executive in the video above.

But it also has to be said that some (I have a few names in mind) think Clinton should be that woman because of her ties to Money and the mainstream establishment that feeds from (and feeds) the same troughs, the establishment from which they draw their own daily cup. For these women, endorsing Clinton achieves two goals with one stroke of the pen, both of which are desirable.

In 2014, Zephyr Teachout asked me [the writer of the piece] whether she should run against powerful incumbent Governor Andrew Cuomo. I told her that the only reason not to do it would be fear — fear that his machine would belittle her, discredit her, turn her into a joke. She stared at me, and said, “Now I have to do it, because you just dared me to.” That’s a bad ass lady, the kind of lady who is gonna take a hammer to the glass ceiling, smash it, and pull everybody up with her.

We fought that race with almost zero institutional support. Hillary Clinton supported Cuomo. Imagine an alternate universe where Hillary was the champion of progressive women in her own state. She would have been on our rickety bus, sweating the broken air conditioning, letting people know that the era of “three men in a room” making all the decisions was over. We would have elected our first female governor in New York.

After Zephyr lost her campaign, I teamed up with some other awesome ladies who wanted to see Elizabeth Warren run for president. We were inspired not just by her passion for financial reform, but also by her biography. Once again, institutional support was thin. And the supposedly feminist argument from a lot of Hillary fans was that it wasn’t Elizabeth’s turn. Another woman would dilute Hillary’s chances, which would be bad for the cause of electing Hillary as the first female president. Hillary-only Feminism. [my emphases]

Much to think about. I’d love to know if anyone made the “not your turn” argument to Warren herself, or whether these “Hillary fans” just said it to each other. 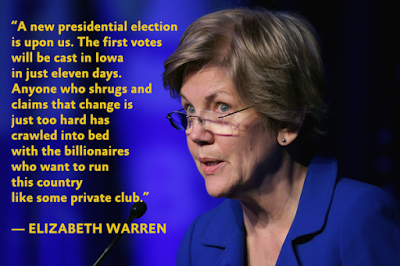 Perhaps when Warren writes her page-turning memoirs, she’ll peel back that curtain as well.

(Blue America has endorsed Bernie Sanders for president. If you’d like to help out, go here; you can adjust the split any way you like at the link. If you’d like to “phone-bank for Bernie,” go here. You can volunteer in other ways by going here. And thanks!)