The Kuznets curve was widely used to describe the relationship between growth and inequality over the second half of the 20th century, but it has fallen out of favour in recent decades. This column suggests that the current upswing in inequality can be viewed as a second Kuznets curve. It is driven, like the first, by technological progress, inter-sectoral reallocation of labour, globalisation, and policy. The author argues that the US has still not reached the peak of inequality in this second Kuznets wave of the modern era.

In 1955 when Simon Kuznets wrote about the movement of inequality in rich countries (and a couple of poor ones), the US and the UK were in the midst of the most significant decrease of income inequality ever registered in history, coupled with fast growth. It thus seemed eminently reasonable to look at the factors behind the decrease of inequality, and Kuznets famously found them in expanded education, lower inter-sectoral productivity differences (thus the rent component of wages would be equalised), lower return to capital, and political pressure for greater social transfers. He then looked at (or rather imagined) the evolution of inequality during the previous century and thought that, driven by the transfer of labour from agriculture to manufacturing, inequality rose and reached its peak in the rich world sometime around the turn of the 20th century. Thus, he created the famous Kuznets curve.

The Kuznets curve was the main tool used by inequality economists when thinking about the relationship between development or growth and inequality over the past half century. But the Kuznets curve gradually fell out of favour because its prediction of low inequality in very rich societies could not be squared with the sustained increase in income inequality that started in the late 1970s in practically all developed nations (see the long-run graphs for the US and the UK). Many people thus rejected it.

The Upswing in Current Inequality as a Second Kuznets Curve

In a new book (Milanovic 2016), I argue however that we should see the current upswing in inequality as the second Kuznets curve in the modern times, being driven, like the first, mostly by a technological revolution and the transfer of labour from more homogenous manufacturing into skill-heterogeneous services (and thus producing a decline in the ability of workers to organise), but also (again like the first) by globalisation, which has both led to the famous hollowing out of the middle classes in the west and to a pressure to reduce high tax rates on mobile capital and high-skilled labour. The elements listed here are not new. But putting them together (especially viewing technological progress and globalisation as practically indissoluble, even if conceptually different) and viewing this as part of regular Kuznets waves is new. It has obvious implications for the future, not the least that this bout of inequality growth will peak like the previous one and eventually go down.

But before I address that part, let us consider recent important work done by economic historians such as van Zayden (1995),Nogal and Prados (2013), Alfani (2014) and Ryckbosch (2014), who have documented periods of waxing and waning inequality in pre-modern Europe. The interesting part is that Kuznets cycles in pre-modern societies basically replicate the Malthusian cycles because they take place in conditions of quasi-stationary mean income. The pre-modern Kuznets cycles are not driven by economic factors but by epidemics and wars. Both lead to a decrease in population, an increase in mean income, higher wages (because of labour scarcity) and thus lower inequality, that is, until population growth in a Malthusian fashion reverses all these gains.

Thus, we can observe Kuznets waves over some six or seven centuries of European history. In pre-modern times, they are observable against time because mean income is more or less constant (it is just one point on the x-axis). After the Industrial Revolution, however, we see the waves responding to economic factors (e.g. technological change, transfer of labour), and can plot them as Kuznets thought against mean income. This is shown here in the graphs for the US and the UK (Figure 1 and 2). In addition, I show in my book long-term inequality cycles for Spain, Italy, the Netherlands, Germany, Japan, Brazil, Chile, and over a shorter period for China. 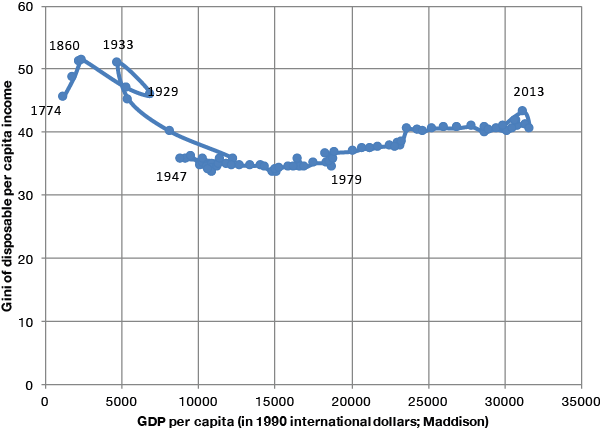 Figure 2. The Kuznets relationship for the United Kingdom/England, 1688-2010 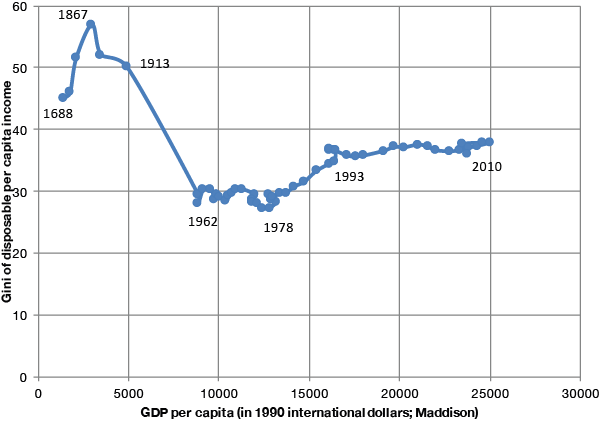 While Kuznets’ explanation was focused almost entirely on economic and thus ‘benign’ forces, he was wrong to overlook the impact of ‘malign’ forces (especially wars) that are powerful engines of income equalisation. I find this somewhat puzzling because Kuznets himself, having worked during World War II in the US Bureau of Planning and Statistics, must have noticed how the war led to the compression of income through higher taxation, financial repression, rationing, price controls, and even sheer destruction of physical assets (as in Europe and Japan).
Inequality may not be overturned soon

Which leads us to the present. How long will the current upswing of the Kuznets wave continue in the rich world, and when and how will it stop? I am sceptical that it will be overturned soon, at least not in the US where I see four powerful forces that keep on pushing inequality up. I will just list them here (they are, of course, discussed in the book):

• Rising share of capital income which is in all rich countries extremely concentrated among the rich (with a Gini in excess of 90);
• Growing association of high incomes from both capital and labour in the hands of the same people (Atkinson and Lakner 2014);
• Homogamy (the educated and the rich marrying each other); and
• Growing importance of money in politics which allows the rich to write rules favourable to them and thus to maintain the inequality momentum (Gilens 2012).

The peak of inequality in the second Kuznets wave should be lower than in the first (when in the UK, it was equal to the inequality level of today’s South Africa) because the rich societies have in the meantime acquired a number of ‘inequality stabilisers’, from unemployment benefits to state pensions.

The pro-inequality trends will be very hard to overturn during the next generation, but eventually they may be – through a combination of political change, pro-unskilled labour technological innovations (which will become more profitable as skilled labour’s price increases), dissipation of rents acquired during the current bout of technological efflorescence, and possibly greater attempts to equalise ownership of assets (through forms of ‘people’s capitalism’ and workers’ shareholding).

Now, these are of course the benign factors that, I think, will ultimately set inequality in rich countries on its downward path. But history teaches us too that there are malign factors, notably wars, in turn caused by domestic maldistribution of income and power of the elites (as was the case in the World War I), that can also do the job of income levelling. But they do it at the cost of millions of human lives. One can hope that we have learned something from history and would avoid this destructive path to equality in poverty and death.