Yves here. Quelle surprise! Most bank customers do not like the idea of negative interest rates. And most would do the rational thing in deflation, which is to hoard cash or squirrel their funds into other investments.

As doubts grow about the effectiveness of quantitative easing, monetary policymakers are leaning towards cutting interest rates further into negative territory as their preferred mode of easing. But this begs crucial and untested questions of whether banks will be willing to pass on the cost to their retail depositors, and of how depositors might react if they did so. This column notes a recently published survey in which a large majority of respondents said that they would withdraw their savings, and yet few would spend more. Although it could be argued that savers might react less negatively when confronted with the reality of negative rates, their powerful aversion to the prospect raises troubling questions about the potential effectiveness of this policy tool.

In their struggle to keep up the momentum of economic growth, central banks are turning to negative interest rate policy (NIRP) as their weapon of choice. Amid doubts about the impact of further large-scale asset purchases, the Bank of Japan (BOJ) has recently followed the ECB and other European counterparts in imposing negative rates on the reserves that banks hold with them. Meanwhile, weak economic data has even prompted talk of the Federal Reserve potentially having to reverse course and join the NIRP club.

But there are doubts about NIRP too. In particular, if banks resist passing on negative rates for fear of triggering a deposit flight, they will fail to incentivise savers to spend. NIRP could still work via boosting asset prices or driving down the exchange rate, but, as the BOJ has discovered, this is a confidence trick that is liable to succumb to the vagaries of financial market sentiment.

So are the banks right to fear the zero lower bound (ZLB)? The obvious problem is that we have no experience to go on, since no bank has been brave enough to breach it in a significant way. The banks are clearly concerned that cutting savings rates below zero would lead to a customer backlash and significant withdrawals of deposits. But with loan rates often contractually linked to money market rates, shielding savers from lower rates comes at the cost of bank profitability, capital generation, and willingness to lend. This, in turn, blunts the intended stimulus that the central banks are trying to deliver by lowering rates.

Such surveys have an obvious drawback: there is inevitably a gap between what people say and what they do – inertia often kicks in. Nevertheless, the results are remarkable. They indicate that zero is a major psychological barrier for savers. No less than 77% said that they would take their money out of their savings accounts if rates went negative. But only 12% would spend more, with most suggesting that they would either switch into riskier investments or hoard cash ‘in a safe place’.

In order to provide a context for the consumer reaction to the possibility that savings deposit rates might go negative, the survey began by asking respondents about how they have responded so far to low interest rates.

Figure 1. Nearly a third of savers have changed their behaviour due to low rates 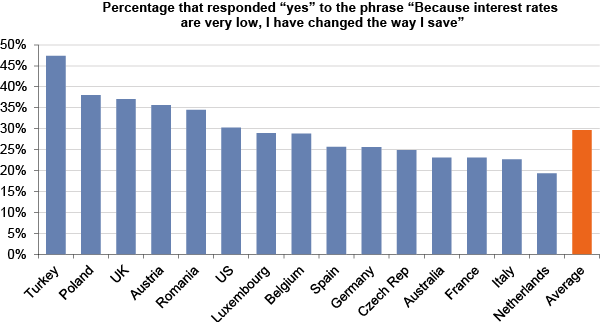 It asked whether the low rates had prompted a change in their behaviour and, if so, how. Across the 15 countries surveyed, 31% of respondents said that they had changed their savings behaviour (see Figure 1). The figures were higher in Eastern Europe, the UK (37%) and Turkey (47%), where rates have traditionally been higher or more volatile.

As to how savers had changed their behaviour in the light of low interest rates, the most popular answer, accounting for 40%, was that they were saving the same amount, but had switched to longer-term forms of saving (see Figure 2). Across countries, the highest proportion of respondents to have made this switch was in the UK, with 49%, and the lowest was in Austria, with 28%.

Figure 2. How have you changed the way you save?

The next most popular response, at 38%, was from those who have been saving less – the response most desired by the central banks. That said, ‘saving less’ does not necessarily translate fully into ‘spending more’, particularly for those households relying on interest income.

Meanwhile, the survey showed that a significant minority – namely 17% – of those who have changed their behaviour have actually increased their saving in response to lower rates. This may reflect the fact that the lower income resulting from lower rates may be making life harder for those who have target income or long-term savings goals, forcing them to save more to compensate.

Response to a Possible Move to Negative Savings Rates

The survey then asked how they might react if rates went negative. Although there is room to doubt if all respondents might actually react as they say if this became a reality, the strength of feeling revealed by the survey is striking. Only 23% of the total sample said that they would do nothing in response (see Figure 3). This compares with 69% of the sample who said that they have not changed the way that they save in response to low interest rates so far. The survey suggests that crossing the zero bound is a major psychological shock to consumers.

The negative reaction to the possibility of negative interest rates is an interesting application of the behavioural economics concept of ‘loss regret’. Feelings evoked by seeing interest rates cut from, say, zero to -0.5% are stronger than those from 1% to 0.5%. The difference is that the former is perceived as an outright loss, while the latter merely as a smaller gain.

There are also political and cultural dimension. Many will see negative rates as an unfair ‘tax’ on small savers, particularly in cultures that celebrate saving as a virtue. In this respect, a significant minority of 11% would save more (Figure 3)

Figure 3. Nearly 80% of savers would respond to negative interest rates 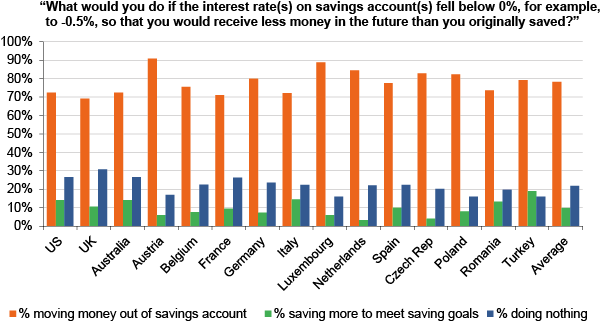 Notes: Weighted by country, age, gender and region, significance tested on 95% level. As respondents were allowed to choose more than one answer, the country total may exceed 100%.
Source: ING International Survey

Figure 4 shows only those who plan to move at least some of their money out of savings accounts (some 78% of the respondents). Some 10% would spend more, almost exactly matching the proportion of those who intend to save more. The remainder are almost evenly split between those who would switch into alternative assets or simply put their savings ‘in a safe place’.

In other words, around 40% who would respond to negative rates (or 33% of the total sample) said that they would hoard cash. In the Netherlands, France and Belgium, this proportion rises to more than 50%.

Figure 4. Switching into investments and hoarding cash are the most popular options 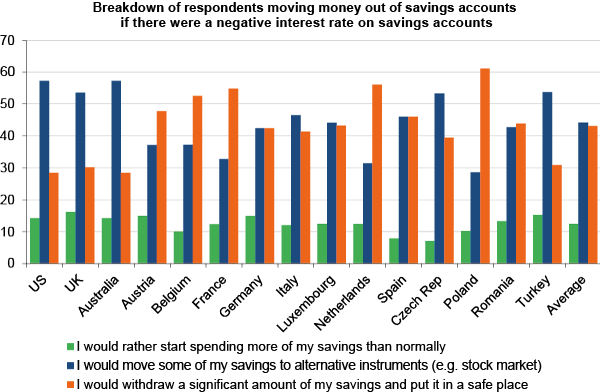 Note: As respondents were allowed to choose more than one answer, the country total may exceed 100%
Source: ING International Survey

This survey makes sobering reading for both banks and central banks. For the banks, the results suggest that they might be right to be reluctant to cut rates below zero. Only 23% of savers would not react, and a smaller proportion still would save more. Four-fifths would move at least some of their money out of their savings accounts. Some of this might find its way into other bank products, but more than a third say that they would take some of their money out and hoard it.

The strength of the responses perhaps reflects the immediate shock of being confronted with the unprecedented possibility of incurring a charge to keep savings in bank accounts. Provided rates went only mildly negative, say no more than -0.5%, or the cuts were perceived as temporary, then the reaction might, in practice, be milder than the survey suggests.

Banks would be faced with an uncomfortable choice between not cutting retail rates below zero, and so seeing their profit margins squeezed, and doing so and risking a substantial deposit outflow.1 They might perhaps mitigate a profit squeeze by raising fees, or increasing the cost of mortgages, as some banks in Switzerland have done. However, these would undoubtedly also meet with customer resistance and official consternation.

Moreover, even if the banks dare to pass on negative rates to retail savers, the stimulus to spending would be far less than the rate cuts so far. Indeed, in the total sample, marginally more (11% versus 10%) of respondents said that they would save more, not less, in the event of negative rates.

One important caveat to this is suggested by the disaggregated results of the survey. These show that richer, older, and more educated respondents would be more inclined to spend than other respondents in the event of negative rates (Figure 5). Since these groups tend to have higher savings levels, more spending by them would more than likely offset lesser spending by the poorer, younger, and less educated groups, giving a greater stimulus to spending.

Nevertheless, the results strongly suggest that the cuts in interest rates below zero are likely to give a smaller boost to consumer spending than cuts in rates above it. Moreover, they also highlight the unpredictability of pursuing NIRP. With the credit channel weak or blocked, central banks have been relying largely on rising asset values and weaker exchange rates to provide the needed stimulus. But the BOJ’s recent adoption of NIRP has had the opposite effect. Evidently, the initial market reaction has been to see it as an act of desperation. The risk is that this negative sentiment will infect the real economy, serving to depress spending. If so, the danger is that NIRP will have an impact on economic growth that is not merely non-linear, but perversely negative.

Endnote
[1] Banks in Belgium will not have this choice. The Ministry of Finance decided last year that interest rates on regulated savings cannot fall below 0% (the minimum is 0.01% base rate + 0.10% fidelity premium for money staying at least a year on a savings deposit).