Yves here. In his book, The Peripheral, William Gibson envisaged that a forty or so year multifacted crisis starting just before 2030  (climate change, species dieoff, rapid rise of disease due to reduced efficacy of antibiotics) would kill off most of the human population. He optimistically still posits that civilization still survives due to a rapid rise in innovation, funded by the rich, natch, for their own survival. He called that period the Jackpot. Hence Lambert and I have taken to saying that the Jackpot in coming.

By David Zetland, assistant professor of economics at Leiden University College in the Netherlands and his blog Aguanomics

Climate change is hard for people to understand or take seriously because its FUTURE impacts will be so vast in scale and intensity. It would be easier for people to “believe in”face if its signs were more local and present (one reason I suggested rebranding it “local warming” years ago).

Sadly, it seems that we’re about the arrive in that moment of vast intensity a lot quicker than previously forecast.

Last week, James Hansen (one of the first scientists to bring CC to public attention) and many co-authors published an article (link in this summary) explaining how previous estimates of glacial melting in Antartica and Greenland need to be updated to consider positive feedback effects that are hastening the process. These effects are due to the slowing of ocean circulation that will simulataneously mean warmer seas near the Antarctic ice shelves (helping those glaciers slide into the water more quickly) as well as colder seas near Northern Europe (as the “conveyor” of warm water from the Caribbean shuts down).

The upshot of their estimates (which combine data from a past era that had similar GHG concentrations to today’s except that today’s have accumulated far faster) is that temperatures and storms will be getting much worse in the next 10-20 years (if not now), while sea levels will rise by at least 2m (6 feet) and as much as 6-7m (20 feet) by 2100 — far higher than current IPCC restimates of 1m.
Unleash the Kraken 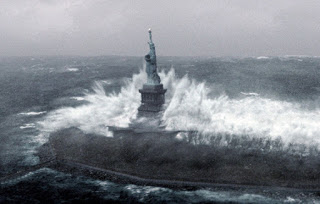 At least it’s not an alien invasion.

These results are far more pessimistic than anything the IPCC has put out for three reasons. First, the IPCC operates by consensus, meaning that the most conservative estimates are used. Second, IPCC data and models are in “uncharted territory,” so it is not easy to decide if natural systems are going to retard or reinforce man-made trends. Finally, the law of averages means that hundreds of co-authors will tend to agree on a business as usual, linear path of change, rather than the new normal, exponential path that Hansen et al. predict.

What makes me so worried about Hansen et al.’s dire prediction is a separate paper that I was reading in advance of my upcoming class. Martin Weitzman has been heavily involved in CC economics for several decades, and his 2011 paper “Fat-Tailed Uncertainty in the Economics of Catastrophic Climate Change” [pdf] explains how we (economists) have underestimated risk on 4-5 dimensions, meaning that our models are inaccurate. As an example, Weitzman explains how an average 10 degree increase in temperatures — a change that would mean “the earth was ice free, while palm trees and alligators lived near the North Pole” — shows up in models as a 0.1 percent drop in long run GDP growth (from 2.0 to 1.9%). Weitzman points out that such models are incompatible with results where “half of today’s human population would be living in places where, at least once a year, there would be periods when death from heat stress would ensue after about six hours of exposure… i.e., temperatures that would represent an extreme threat to human civilization and global ecology as we now know it.”

The upshot is that economic cost-benefit models may be radically understating the cost of climate change (in exactly the same way as they failed to predict the financial crisis), which means that most discussions are far too conservative about the need to act quickly to reduce GHG emissions.

What Will the Dutch Do?

These two papers put a fine point on the dangers that threaten human civilization, let alone “life as we know it”. Although I am sure that some humans will be around in 2100,  I am also pretty sure (given the total lack of meaningful action to reduce GHG emissions) that they will live in a different world. The Dutch, for example, will be forced to abandon two-thirds of their country. Americans will lose half of most coastal cities. San Franciscans will live in the hills, yes, but will they survive the hurricanes and ice storms? People in the developing world will face violence, famine and misery.

Back in 2006, James Lovelock (Mr. Gaia) predicted that 80 percent of humans would diefrom climate change. More recently, he says that he may have been too pessimistic, except that it’s also a good idea for humans to retreat to climate-controlled cities (reminds me ofThe Water Knife) — a prediction that many would still find alarming.

Bottom Line: A few years ago, I wrote that my dad’s lifetime (roughly 1930-2030) was probably the best century we will ever live. Now I wonder if we’re more likely to regret than enjoy the next few decades.*

* I was thinking of adding some advice about pricing water or carbon, etc., but I’ve said this often enough, without seeing much change. There’s nothing new to add. Sorry.