You are getting a big dose of Links today to make for the lack of original posts by me (although Richard Smith has another episode from his ongoing international fraud gumshoe work). The reason for that is I spent four hours on tech issues that are still unresolved and will probably not be wrapped up until the weekend at best. They are yet another illustration of crapification, but I need to calm dawn before I can write it up properly (assuming I determine that there are enough implications to be worth discussing). BTW this is despite the help of a very able and good natured expert.

Tracey Emin announces she has married a rock Telegraph. Wow, the Telegraph has turned into the Daily Mail, save the wonderfully long headlines.

Nude with seafood: Mark Rylance and Emma Thompson pose for marine protection Telegraph. We all need to eat further down the food chain….

Map of Europe 1000 AD to present day YouTube (Scott). In just over three minutes! It then runs again much slower for those who want to see more detail.

Global Warming Could Yield Catastrophic Effects Sooner Than We Think Fortune (David L). I never know who “we” is. I’ve always assumed tail risks are much greater than are widely assumed (or put it another way, the impact of positive feedback loops are too often ignored or underestimated).

For Chronic Low Back Pain, Mindfulness Can Beat Painkillers NPR (David L). This is two-decade old news, but not surprising that this has taken so long to get mainstream attention.

Hungary’s central bank is the latest to go negative Telegraph

WikiLeaks reveal that Schauble was afraid of the collapse of eurozone failed evolution. Gives some important detail from 204, but its interpretation re 2105 is off. As we discussed in detail contemporaneously, and reconfirmed after the fact by looking at the IT issues in depth, Greece not only was not even seriously considering a Grexit, but operationally it was simply impossible at anything less than catastrophic cost. And yes, we are fully aware of the cost of implementing the memorandum as a fallback. Many observers sympathetic to the Greek people (as we are) fail to appreciate that there are situations, and this was one, where the key actor is faced with only terrible choices.

How Bush-Cheneyism made Mideast in its Image: Wars, WOT, With us or Against Us Juan Cole (resilc)

From Reagan’s Cyber Plan To Apple Vs. FBI: ‘Everything Is Up For Grabs’ NPR

Hillary Clinton won big in Arizona, but she might not win again for three weeks. New Republic (resilc)

Jeb Bush Backs Ted Cruz for President Bloomberg (resilc). As if anyone will care.

Why we should fear a cashless world Guardian (Chuck L)

Forty millionaires ask New York to raise taxes on wealthy in ‘1% plan for fairness’ Guardian. Millionaires, not billionaires, but still a good sign.

Why Voters Will Stay Angry Bloomberg. Today’s must read.

A bit of a challenge, but our birders helped to figure this one out! The short conical bill, the whitish eyebrow streak and the thick brown streaking on white underparts all identify this as the Female Purple Finch. But, just to add a sense of mystery, the Stokes Field Guide reminds us that a first year male looks like the adult female, but may have a pinkish or yellowish tinge. A close look at this bird does show a yellowish tinge, so it is probably a First Year Male Purple Finch. Congratulations! 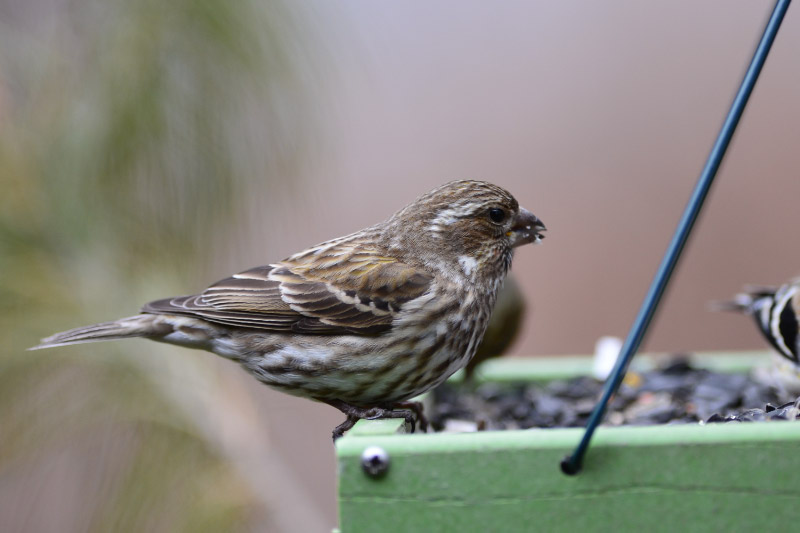