By Arthur E. Berman, a petroleum geologist with 36 years of oil and gas industry experience. He is an expert on U.S. shale plays and is currently consulting for several E&P companies and capital groups in the energy sector. Originally published at OilPrice

Gasoline demand is a red herring.

U.S. Gasoline Consumption Has Fallen 2 Million Barrels Per Day Since 2005

Those who believe that gasoline demand is the fire behind oil’s recent rally confuse production with consumption. They also don’t understand that Americans increased their driving when oil prices were $100 per barrel and continued to travel more miles throughout and despite oil-price highs and lows.

A recent Bloomberg article stated, “American gasoline consumption rose to 9.25 million barrels a day in March, an all-time high for the month.”

Consumption of gasoline in the U.S. has increased 802 thousand barrels per day (kbpd) since January 2014 but is 1,973 kbpd less than peak consumption in June 2005. 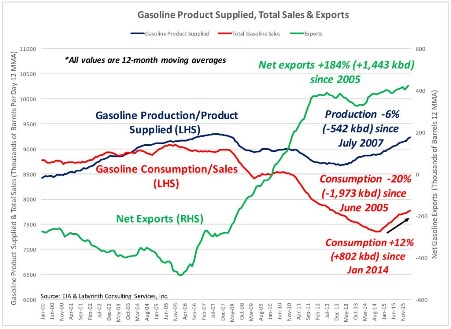 So, consumption has increased but remains far below pre-2012 levels. Production is again approaching earlier peak levels but most of the increased volume is being exported. The belief that U.S. consumption is approaching record highs is simply not true.

Americans Are Driving More But Using A Lot Less Gasoline

Americans are driving more than ever before. Vehicle miles traveled (VMT) reached an all-time high of 3.15 trillion miles in February 2016 (Figure 2).

VMT have increased 97 billion miles per month (3 percent) since the beginning of 2015 and gasoline sales have increased 187 kbpd (2 percent). The rates of increase are not proportional. 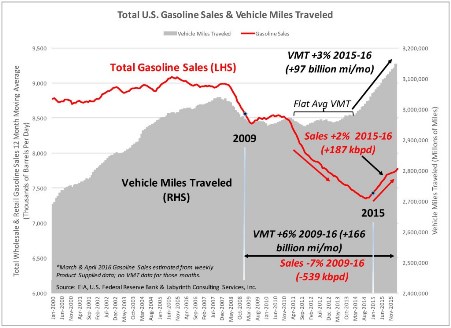 For example, VMT was fairly flat from mid-2011 until oil prices collapsed in September 2014 yet gasoline sales fell more than 1 million barrels per day during the same period. Americans traveled the same number of miles but used a lot less gasoline. Even with the VMT increase since 2015, sales are still 539 kbpd less than in January 2009. 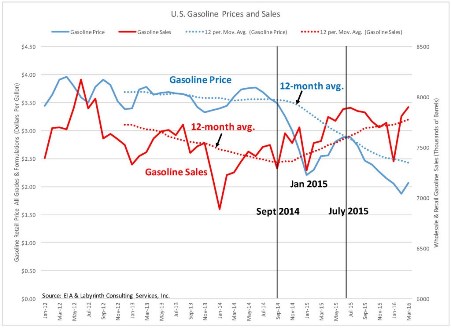 Prices reached a low in January 2015 and then increased to a peak in July 2015. Gasoline sales increased right along with prices, not exactly the relationship we would expect. Although gasoline usage is strongly seasonal, consumption is not simply a function of price.

Figure 4 shows that vehicle miles traveled increased from March 2013 through September 2014 when oil prices averaged almost $100 per barrel. It is unclear why Americans began driving more but it was not because gasoline prices were cheap. 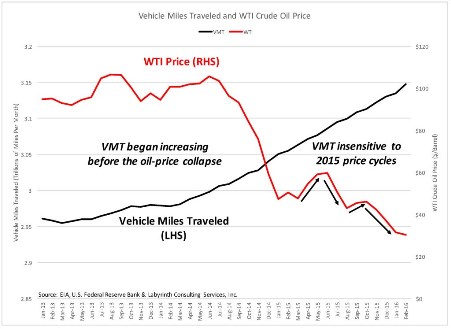 The factors that underlie driving behavior are complex. Gasoline price is among those factors but there is no clear correlation between price and consumption.

As U.S. crude oil production began to decline in 2015, more oil was needed to produce gasoline and other refined products so imports increased. 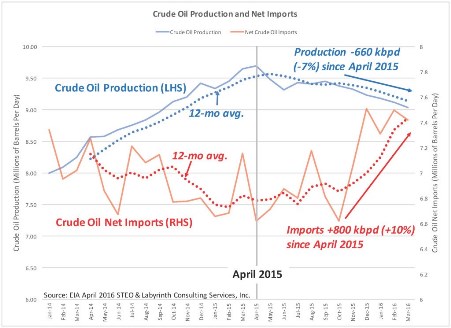 When analysts mistake gasoline production for consumption, they include gasoline made from imported oil in their celebration of increased U.S. “demand!”

Moreover, increased imports are also included in U.S. inventory volumes. If the whole situation seems complicated, that’s because it is and the lesson is to be careful about your sources of information.

Gasoline Demand Is A Red Herring

Americans are driving more than ever but using less gasoline than a decade ago. A lot of this is undoubtedly because of greater fuel efficiency. It seems unlikely that gasoline consumption will ever again reach levels seen before the Financial Collapse in 2008-2009.

The correlation between gasoline price and vehicle miles traveled is not very good. Americans started driving more when prices were very high and kept driving more despite large fluctuations in price. I cannot explain this except to observe that aspects of gasoline consumption must be somewhat inelastic. Price matters but not as much or in the same way that I imagined.

What is clear is that gasoline consumption is not a significant factor in the recent oil price rally. The collective consciousness that drives the oil market is fed up with low oil prices. It looks for and sometimes invents excuses to raise prices and ignores compelling reasons to lower them.

Gasoline demand is the most recent invention and it is a genuine red herring.