Richard Pevear and Larissa Volokhonsky, The Art of Translation No. 4 Paris Review (guurst)

These beautiful cardboard electronics are touch-activated SpringWise. I had Frank Gehry cardboard furniture a long time ago…got it super discounted on sale.

20-year review shows 90% of disasters are weather-related; US, China, India, Philippines and Indonesia record the most UNISDR

Chinese state entities argue they have ‘sovereign immunity’ in U.S. courts Reuters. EM: “Imagine the toxicity such legal stratagems could cause if coupled with the TPP’s ISDS provision. ‘We can devastate your environment and abuse your workers, enjoy sovereign legal immunity for doing so, and sue you for lost profits if you try to say otherwise’.”

The Queen has expressed the uncomfortable truth about power Financial Times. Shorter: “The Chinese were rude.”

Japanese hail Hiroshima visit, say apology not needed Japan Times. Calling Clive for calibration re what he sees in the Japanese language press. Japanese are very respectful of authority and some might be loath to be seen criticizing a US president to a reporter (as in the in-personl poll method may have biased the results). This may indeed be a valid sample, but Japan Times’ role is cheery reporting on Japan to gaijin. YY points out:

NHK 7:00 O’clock News, which I regularly watch, is actually a good barometer of median point of Japanese reactions. What is notable is that there is more coverage of the coverage of the issue of apology than whether or not such sentiment is actually sought. What was more interesting is the reporting of the immediate reactions of the Chinese and Korean governments, just to check how they would react. The Chinese spokesbody did take the opportunity to snipe at the Japanese re-militarization concerns. The Korean reaction was a bit more bland.

As long as the Enola Gay is enshrined at the air and space museum, and with a shine that it never possessed as an active aircraft, apologies are pretty useless anyway. Besides the conventional fire bombings were just as horrific and more lethal.

Brexit? How can you Brits take all the scaremongering? It’s enough to make someone vote for Brexit out of contrariness.

Why Sanders won in West Virginia WSWS (Judy B)

Trump won’t release tax returns before election The Hill (furzy). He can’t carry on about “Crooked Clinton” (effectively) and not release his returns.

Romney to Trump: Not releasing tax returns is ‘disqualifying’ The Hill

Donald Trump Is Considering Newt Gingrich for Vice Presidential Role Bloomberg. This reads like a bad joke but it isn’t. Trump’s mopping-up operation in the Republican party seems to be working against what would make him viable with the general electorate.

Trump Says He Would Appoint Anti-Choice Justice to Supreme Court (Video) Alternet. Ugh. Looks like he’s decided that he’s alienated so many women he might as well double down and go for evangelicals. This may cost him the election. He could get away with positioning himself a mere lout, particularly if he got a woman VP, if he held to at least OK positions on women’s issues. But this will drive a lot of women who might have stayed home out of ambivalence over Hillary to the polls.

Gay Marriage Won, But Other Liberal Causes Will Probably Struggle To Copy Its Success FiveThirtyEight (resilc). Wrong conclusion. Gays has $ (making them a desired voter group), were good at messaging, and were willing to withhold their support from the Dems. They also shifted prevailing views enough to make the change seem less radical. Other “liberal causes” lack the guts. And ignores that the generational trend heavily favors “liberal causes”.

OPEC Is Dead, What’s Next? OilPrice

11 Signs That The U.S. Economy Is Rapidly Deteriorating Even As The Stock Market Soars Economics Collapse (RR). Needless to say, this is a perma-bear blog, but the list does have some not-well-known factoids.

Jobs: How Good are the Jobs the Economy is Creating? Michael Shedlock

Are Newspapers Captured by Banks? Evidence from Italy ProMarket

Chelsea Clinton’s Husband Closing Hedge Fund After Losing 90 Percent Of Its Money Daily Caller. You have to work to lose 90%. And have long lockups so the investors can’t run away. But he bet that austerity would work!

Pew study sees a shrinking middle class in major US cities Associated Press (allan). The FT has this study as its lead story.

Billionaire Ken Griffin: ‘We are more and more in a winner-take-all world’ Business Insider (David L)

Antidote du jour (Christian Science Monitor via Furzy): “WikiLeaks founder Julian Assange holds up his new kitten at the Ecuadorian Embassy in central London, Britain, in this undated photograph released on Monday. The kitten is a gift from Assange’s young children to keep him company.” Sporting of the embassy to let him have a pet. 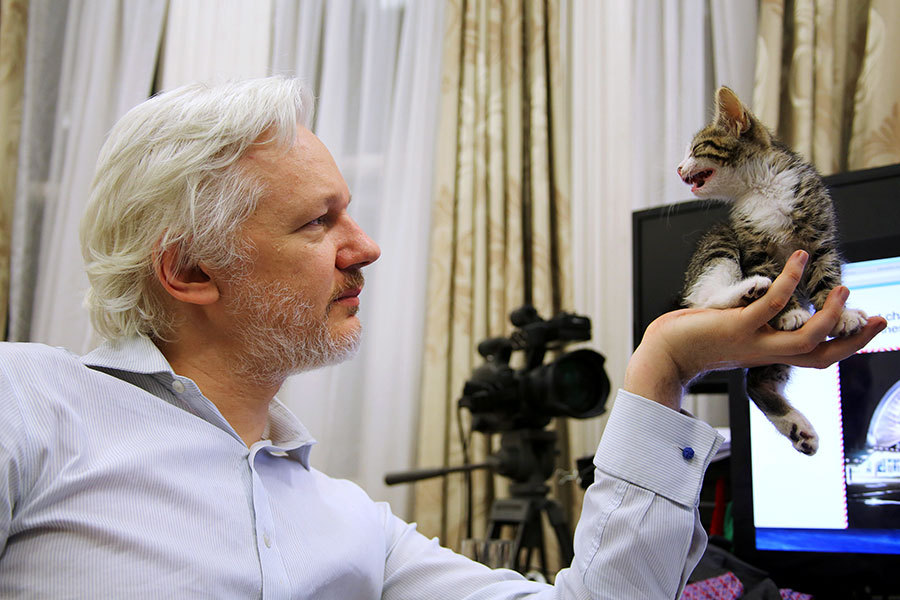