By Nick Cunningham, a Vermont-based writer on energy and environmental issues. You can follow him on Twitter. Originally published at OilPrice

If the whims of oil speculators are anything to go by, then another oil price downturn looks increasingly unlikely.

Oil prices have gained more than 80 percent over the past three months, bouncing off of $27 lows in February to hit $50 last week. Those sharp gains raised the possibility of another crash in prices because the fundamentals still appeared to be bearish in the near term.

By early May, oil speculators had built up strong net-long positions on oil futures, extraordinary bullish positions that left the market exposed to a reversal. Speculators had seemingly bid up oil prices faster than was justified in the physical market.

But the physical market got some help. The massive supply outages in Canada (over 1 million barrels per day) and Nigeria (over 800,000 barrels per day) provided some support to prices, erasing some of the global surplus.

Now speculators who had started to short oil in May have retreated, pushing short bets down to an 11-month low. “If you’ve been short since February this has been a very painful ride,” Kyle Cooper, director of research with IAF Advisors and Cypress Energy Capital Management, told Bloomberg in an interview. “There are always a few die-hards but otherwise you’d want to get out. This is indicative of the improving fundamentals.” 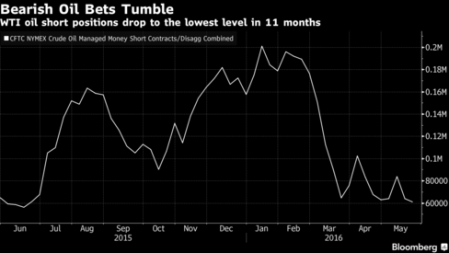 With the supply outages, along with some early signs that the record levels of crude oil inventories are starting to come down, prices are on firmer footing than they were a few weeks ago. $50 oil no longer looks expensive. “The confidence of the shorts has been shattered,” Phil Flynn, senior market analyst at Price Futures Group, said in an interview with Bloomberg. “A lot of bears continued to bet that prices would fall well into the rally. When relatively bearish banks like Goldman Sachs changed to a more bullish outlook, bears noticed.”

The next big catalyst is the OPEC meeting that begins on June 2, although there is a general consensus that very little will be agreed on at the meeting. Saudi Arabia has shifted course over the past two years, downgrading its faith in the oil cartel as a vehicle for its oil policy. Riyadh’s extraordinary plan to gradually shift its economy away from oil as its almost sole source of revenue should be read in conjunction with its decision to step up production in the face of an already oversupplied oil market. Working within OPEC for to pursue price stability makes sense if Saudi Arabia expects predictable demand for its oil – keeping production on the sidelines works to its advantage because its assets would only gain value over time.

But if Saudi Arabia thinks that the world will start to attack oil demand via alternatives such as electric vehicles and efficiency – and there are signs that Riyadh is concerned about the sustainability of long-term demand – then monetizing its oil assets today by producing at higher levels is a more prudent approach. In short, Saudi Arabia is no longer willing to play the role of price stabilizer, which means that cooperating with OPEC members is not as useful as it once was.

In any event, at this week’s meeting at least, there will likely be no change of course. OPEC members will continue to produce as much oil as they can, battling for market share. One can argue with the wisdom of that strategy, but the markets are indeed balancing on the backs of high-cost producers. The U.S., for instance, has lost 900,000 barrels per day since peaking last year. And with oil back at $50 per barrel due to supply shortfalls in non-OPEC countries, there is little reason for Saudi Arabia to change tactics.

Of course, the markets are already pricing such an outcome into the market. Although OPEC has had a knack for springing surprises on the oil markets over the past few meetings, barring any unexpected agreements WTI and Brent probably won’t move much from the developments in Vienna.