By New Deal Democrat. Originally published at The Bonddad Blog

On Monday I gave what I think is a reasonable roadmap to the next recession. I want to follow up on this a little.

The post from nearly 10 years ago was entitled, Are Hard Times Near? The great decline in interest rates is ending.” The theory is right in the title. Since the 1970s, real average hourly earnings had declined. Average Americans coped by spouses entering the workforce, by borrowing against appreciating assets, and by refinancing as interest rates declined.

By 1995 the spousal avenue peaked. Borrowing against stock prices ended in 2000. Borrowing against home equity ended in 2006. When interest rates failed to make new lows, the consumer was tapped out, and began to curtail purchases. A recession began – and its effects have lingered and lingered. Hard Times were indeed near.

Here is a graph from 1981 of mortgage rates and 10 year treasuries: 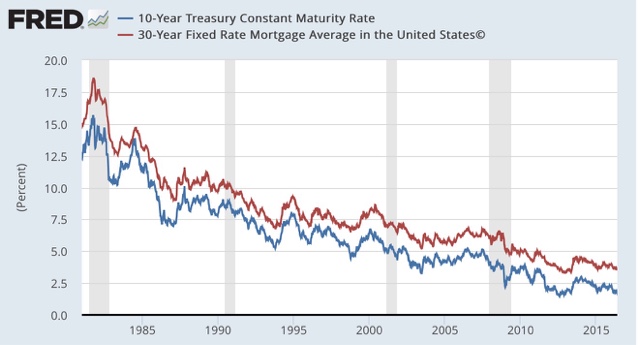 In that article in 2007, I wrote that the consumer might yet have one more chance to refinance debt. In fact after the recession it turned out there were two: in 2009 and again in 2013. Ten year treasuries made a 60 year+ low in 2013 at 1.50%. Even if treasuries, and mortgage rates tied to them, make a new low, the floor is somewhere north of 0%. That -1.5% decline in a mortgage payment on a $250,000 house would be $3750 a year, or a little over $300 a month. That’s the most extreme case. Even if interest rates make new lows, households that refinance are likely to see more on the order of $100 or $200 per month of freed up cash — not enough to power much consumer spending.

Yesterday Molly Boesel of Core Logic confirmed this, writing in her blog

Because a refinance isn’t free, a simple rule of thumb is to add 100 basis points to the current market mortgage rate as the rate at which borrowers would have an incentive to refinance…. According to the chart [bleow], most borrowers hold mortgages with rates up to 4.50 percent, with 62 percent of mortgages and 72 percent of UPB in this range. 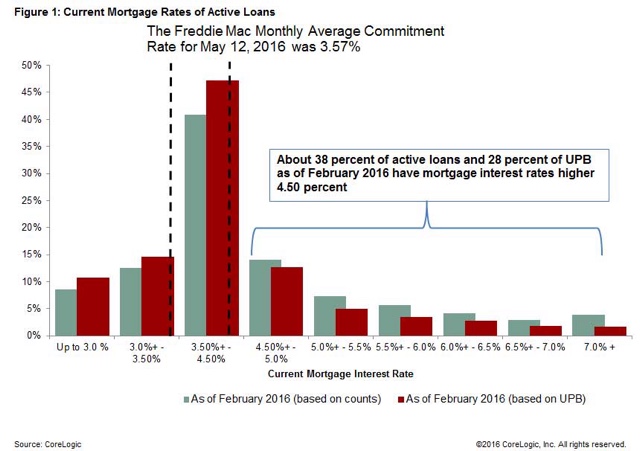 If mortgage rates rise as predicted, we will certainly see refinancing volumes fall in 2016. Note there is a small share of outstanding mortgages with interest rates of about 300 basis points or more above the current market rate.

Currently nominal wage growth is running at about 2.5% YoY. Real wages have been boosted in the last 2 years by collapsing gas prices. Once that is over, what happens next? Even 2% YoY inflation eats up nearly all of consumers’ wage growth. A 3% YoY inflation rate means real wages decline.

So the bottom line is, we are already in a period – a period that I expect to last an entire generation – where real gains by average Americans won’t be available from financing gimmicks, but must come from real, actual wage growth. At the moment I see little economic or political impetus to make that happen, even though average Americans understand via their wallets the issue all too well. Eventually it will happen, but I believe between now and then is another recession, one that I fear is likely to be worse than the 2008-09 recession because it is likely to include a spasm of wage-price deflation.