Boris Johnson is now the most hated person in the Western world. He is attempting to do something about that in the UK via an article in the Telegraph that says that Brexit will usher in the best of all possible worlds for the UK.

I’m not making that up. Johnson says citizens will get to keep all the things they love, like freedom of movement between countries and affordable European products, and get rid of what they don’t, meaning those EU nasty rules and courts.

This is so far from anything credible that I wonder if part of Johnson’s motive for writing it isn’t just to reduce his personal risk but to disqualify himself for leadership of the Conservative party. He’s in the position of being the dog that caught the car. And it’s hard to see how he can be effective with the white-hot anger at him. As one reader said:

I have been talking to some of my neighbours in London and am astonished how many are talking about leaving the country. The atmosphere is more febrile by miles than at any time since I arrived here half a century ago.

Johnson, once a favourite of the crowds in London, is being booed very aggressively by large crowds when he appears outside his house and clearly requires police protection. He may have to be moved to other accommodation for his safety.

And yes there are people now talking openly in the streets that they are going to throw the foreigners out.

The mood is very ugly. Remainers are saying that the country have been lied into voting to leave the EU and are openly challenging the vaiidity of the referendum result.

This could get very nasty.

Johnson’s promises now are no more credible than his campaign statements, such as: 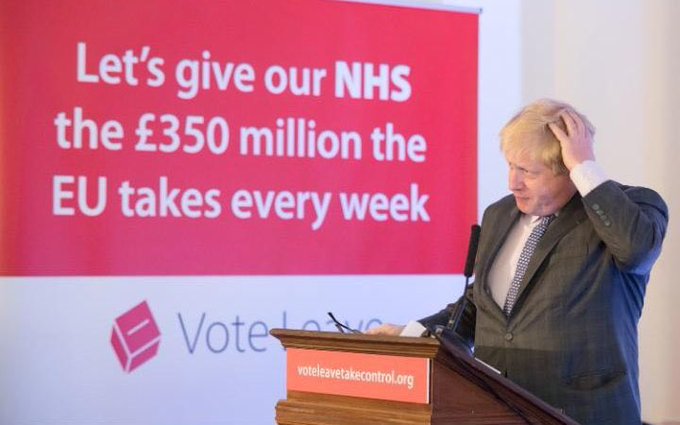 As Sky News reported a day ago:

Brexiteer Iain Duncan Smith has stepped back from his campaign’s promise to give the NHS £350m extra per week….

But the former secretary of state for work and pensions said: “I never said that during the course of the election.”

It comes as another Conservative MP Leave campaigner, who will back Boris Johnson for leader, said there was no plan for Brexit.

But his article, I cannot stress too much that Britain is part of Europe – and always will be, Johnson is now a man with a plan. It warrants, if nothing else, as an indicator of how desperate the main actors in the Brexit drama are eager to extricate themselves from the holes they’ve dug.

Here is the core of his pitch:

It is said that those who voted Leave were mainly driven by anxieties about immigration. I do not believe that is so….I can tell you that the number one issue was control – a sense that British democracy was being undermined by the EU system…

I cannot stress too much that Britain is part of Europe, and always will be. There will still be intense and intensifying European cooperation and partnership in a huge number of fields: the arts, the sciences, the universities, and on improving the environment. EU citizens living in this country will have their rights fully protected, and the same goes for British citizens living in the EU.

British people will still be able to go and work in the EU; to live; to travel; to study; to buy homes and to settle down. As the German equivalent of the CBI – the BDI – has very sensibly reminded us, there will continue to be free trade, and access to the single market….

Yes, there will be a substantial sum of money which we will no longer send to Brussels, but which could be used on priorities such as the NHS

The only change – and it will not come in any great rush – is that the UK will extricate itself from the EU’s extraordinary and opaque system of legislation: the vast and growing corpus of law enacted by a European Court of Justice from which there can be no appeal. This will bring not threats, but golden opportunities for this country – to pass laws and set taxes according to the needs of the UK.

Yes, the Government will be able to take back democratic control of immigration policy, with a balanced and humane points-based system to suit the needs of business and industry. Yes, there will be a substantial sum of money which we will no longer send to Brussels, but which could be used on priorities such as the NHS. Yes, we will be able to do free trade deals with the growth economies of the world in a way that is currently forbidden.

So why exactly should the other 27 members of the EU allow the UK to pick and choose what part of the EU arrangement they like and scotch the rest? Remember that Cameron tried getting some small concessions before the Brexit vote and came back virtually emptyhanded? If this were an economic negotiation, as opposed to a politically fraught one, the only way would be to pay the other side to sweeten the deal for you, which is the opposite of one of Johnson’s fantastical promises, that the UK will get all of the bennies of membership along with lower payments to the EU.

Similarly, why should Europe stand for the UK restricting work opportunities for EU citizens in the UK while allowing Brits to steal jobs from their member nations via letting them work there under more liberal EU rules? Why should they allow free access to the European market when the UK will put EU manufacturers and farmers through the hassle of different consumer safety, labeling, and legal liability regimes?

Moreover, Johnson promises more neoliberalism, in the form of reducing those supposedly nasty EU rules. Yet particularly for the Labor voters who were strong supporters of Remain, EU regulations are seen as attractive precisely because the labor, human rights, and environmental protections are stronger than what the UK would put in place.

But the biggest lie in the many big lies here is the idea that the UK has any bargaining leverage. It was in a disadvantaged position before. Its counterparties had vowed to make the exit punitive to discourage other separatists-in-waiting. As PlutoniumKun pointed out yesterday, the UK was not well liked on the Continent even before this rupture:

The UK is, and has been for years, universally loathed within the corridors of the EU. The failure of UK governments, in particular Conservative governments, to accept that the EU existed for any other purpose than extracting money or blaming for domestic problems has long irritated them. But much worse, the complete refusal of the UK to ‘be part of the team’ for years has been highly damaging. The UK has long sent second raters and no-hopers to Brussels, has long been obstructive for the sake of being obstructive, and most crucially, has not built up allies within the European parliament (the fact that the Tory party aligns itself with crankish East European parties instead of the mainstream European centre-right speaks volumes). Quite simply, they have no friends there….

So I see there as being a lot of potential reasons why Brussels and powerful EU countries may well have a vested interest in creating a short term crisis. In particular, Sterling must be very shaky – a rapid fall could provoke panic in London and would allow the EU to ‘not let a good crisis go to waste’. This may seem cynical, but seeing what happened to Greece, it would be a mistake to underestimate the cynicism of EU leaders. And old mercantilist habits die hard – the Europeans never bought into English liberal ideas that trade was not a zero sum game.

And now the European leaders and Eurocrats are justifiably furious for reckless British pols throwing a wrecking ball into the very heart of their fragile system merely to gain some political advantage, with no serious plan on their side.

In addition, procedurally, it is virtually impossible to effect such fundamental changes outside of pressing the Article 50 red button. From a very informative article at the Constitution Unit:

It is vanishingly unlikely that the UK could withdraw without triggering Article 50 at all. During the campaign, Vote Leave suggested that it might be possible to leave via Article 48 of the Lisbon Treaty, which sets out the procedure for revising EU treaties. But a simple majority of member states could block even a request to consider such a route, and the amendments themselves would require ratification by every member state. Given that the Article 50 process skews the balance of power towards the continuing member states, we can presume they will insist on its use. Leaders of both Vote Leave (including Michael Gove) and Leave.EU (including Nigel Farage) have spoken since the result was announced in terms suggesting that they recognise this.

Someone needs to send Johnson the memo.

The article also gives a more realistic picture of how the negotiations would go:

The process of withdrawal will involve three sets of negotiations:

These negotiations could run in parallel, or the UK could negotiate withdrawal first and future arrangements later. As Professor Adam Lazowski has pointed out, there are difficulties in both approaches.

In the meantime, the pressure for the UK government to get moving is rising. The IMF’s Christine Lagarde called for prompt action to keep the Market Gods from killing the Confidence Fairy. However, she did point out the inconsistency in the EU position, and it was probably not referring to Merkel trying to tamp down the “nasty” remarks from the foreign ministers of the founding EU members. The Europeans are sending conflicted messages. The desire for a speedy exit and punishing the UK (out of their own pique as well as to discourage right wing nationalists) conflicts with the desire to reduce real economy damage. They need to calm down and sort out priorities.

In addition, as of this hour, sterling dropped another 2% and the 10 year Gilt yield fell below 1%. The futures market suggests hte US stocks will open down a bit under 1%. The Financial Times ran a story yesterday with the headline, Banks begin moving operations out of UK, which was roundly attacked in the comments section for exaggerating how imminent and large the job shifts would be. As Felix2012 pointed out:

The total number of workers in the 14 banks above is 65k and there are 2 million employed in the financial and associated industry across UK (mostly outside London).

Let’s just say London employs 200k people, we are talking about 1-2% (a few thousands) job loss. It is painful, especially for the people affected, but it is far from ‘close shop and go’.

Britain’s vote to leave the EU is prompting a sizeable minority of employers in the UK to freeze hiring and cut their investment plans, according to a survey of more than 1,000 business leaders.

The poll is an early indication that a British exit from the bloc will hit jobs and investment as employers grapple with volatile markets and political instability. Almost two-thirds of the business leaders surveyed by the Institute of Directors on June 24-26, immediately after the vote, said the referendum result would be “negative” for them.

However, it’s hard to know how big the Brexit “uncertainty” effect is without a pre-Brexit baseline.

A final update: the Scottish first minister, Nicola Sturgeon, is threatening to ask the Scottish parliament to obstruct Brexit. But Scottish secretary David Mundell effectively said Whitehall will ignore the Scots if they fail to consent.

Cameron is scheduled to speak today. I doubt he is going to try to upstage Johnson by pulling a rabbit out of a hat.