Labor MP Jo Cox, the MP for Batley and Spen, was shot and has died. Cox worked with Syrian refugees and the attack is assumed to be the result of her efforts. The 52 year assailant is in custody. The question is whether he was acting alone or on behalf of an extreme far-right group. The last murder of an MPs took place in 1990 at the hands of Northern Ireland radicals.

Both the Leave and Remain campaigns have been suspended.

An MP has died after she was shot and stabbed in an attack in her constituency, West Yorkshire Police have said.

Jo Cox, 41, Labour MP for Batley and Spen, had been left bleeding on the ground by her attacker. A 52-year-old man was arrested nearby…

Labour leader Mr Corbyn said the country would be “in shock at the horrific murder”, describing the MP as a “much loved colleague”….

Cafe owner Clarke Rothwell, who witnessed the attack, said he heard a “loud popping noise that sounded like a balloon burst – a loud balloon”.

“When I looked round there’s a man stood there in his 50s with a white baseball cap on and a jacket with a gun, an old fashioned looking gun in his hand,” he said.

“He shot this lady once and then he shot her again, he fell to the floor, leant over shot her once more in the face area.

“Somebody tried to grab him, wrestling with him and then he wielded a knife, like a hunting knife, just started lunging at her with a knife half a dozen times. People were screaming and running from the area”.

Eyewitness Hithem Ben Abdallah, said the mother of two was left lying and bleeding on the pavement after the incident.
Mr Abdallah, 56, was in a cafe next door to the library shortly after 13:00 BST when he heard screaming and went outside.

“There was a guy who was being very brave and another guy with a white baseball cap who he was trying to control and the man in the baseball cap suddenly pulled a gun from his bag”.

After a brief scuffle, he said the man stepped back and the MP became involved.

Mr Abdallah said the weapon had “looked handmade” and a man who had been wrestling with the gunman continued even after seeing the gun.

He said: “The man stepped back with the gun and fired it and then he fired a second shot, as he was firing he was looking down at the ground.”

“He was kicking her as she was lying on the floor”, he said.

The Telegraph has set up a live blog. It reports that the suspected assailant is Tommy Mair and provides a link to information about him. Some witnesses say that he shouted, “Britain First,” which is the name of a far right group in the UK. The leader of Britain First said before Cox was declared dead:

He said: “At the moment that claim hasn’t been confirmed – it’s all hearsay.

“Jo Cox is obviously an MP campaigning to keep Britain in the EU so if it was shouted by the attacker it could have been a slogan rather than a reference to our party – we just don’t know.

“We’re just as shocked as everyone else. Britain First obviously is NOT involved and would never encourage behaviour of this sort.

“As an MP and a mother, we pray that Jo Cox makes a full recovery.”

This is the statement from Jo Cox’s husband: 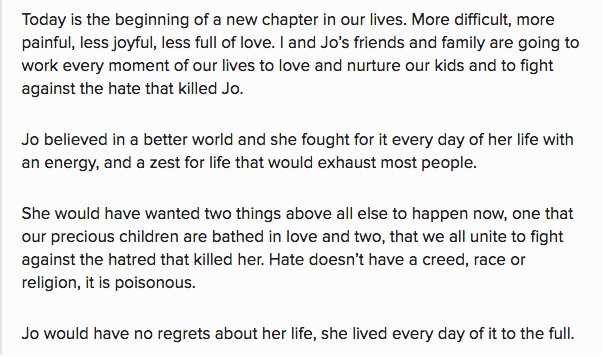