Yves here. Steve Keen, one of the few economists to predict the global economic crisis, has identified China as a prime candidate for Japan-style zombification, based on its rapid growth in debt from an already not-shabbly level. China has engaged in stop-and-go economic policies, tightening credit, then loosening it again when growth weakens too much. Recent reports have also had senior party members call for an end to credit growth. Note that Keen points out that a mere end to credit growth will trigger a recession or worse in countries with rapid debt growth and high overall debt levels.

And signs of strain are growing. The Financial Times reported that companies are stretching their payables. China optimists are arguing that housing inventories are clearing, which portends further growth. MacroBusiness debunked that notion yesterday:

Inventory clearance “on track”. Sure, if a barely perceptible slowing in the uptrend and more recent reversal upwards is “on track”. And this is only tiers 1&2. In the tier 3&4 cities there is no change.

The short answer to the question is China clearing it’s housing glut is “no”, that will only happen when prices fall enough to make property affordable.

Chinese loan sharks are demanding nude photos as collateral from female borrowers which can be used for blackmail if they fall behind on their repayments.
The aggressive tactics are an example of the drastic debt recovery measures that are being employed in the slowing Chinese economy.

The democratisation of finance in China via peer-to-peer lenders and the vast shadow banking system, with interest rates sometimes topping 30 per cent, have proved an inflammatory mix and fuelled a surge in souring loans.

Female college students in the southern province of Guangdong were told to hand over naked photos of themselves holding their ID cards, with lenders threatening to make them public if they failed to repay their microloans, according to the Nandu Daily, the local newspaper.

Hmm, well, although not directly related it is risk, nicely embodied in this story, that is driving the Chinese crackdown on shadow lending. And for now, it is working after a recovery in the early months of the year: 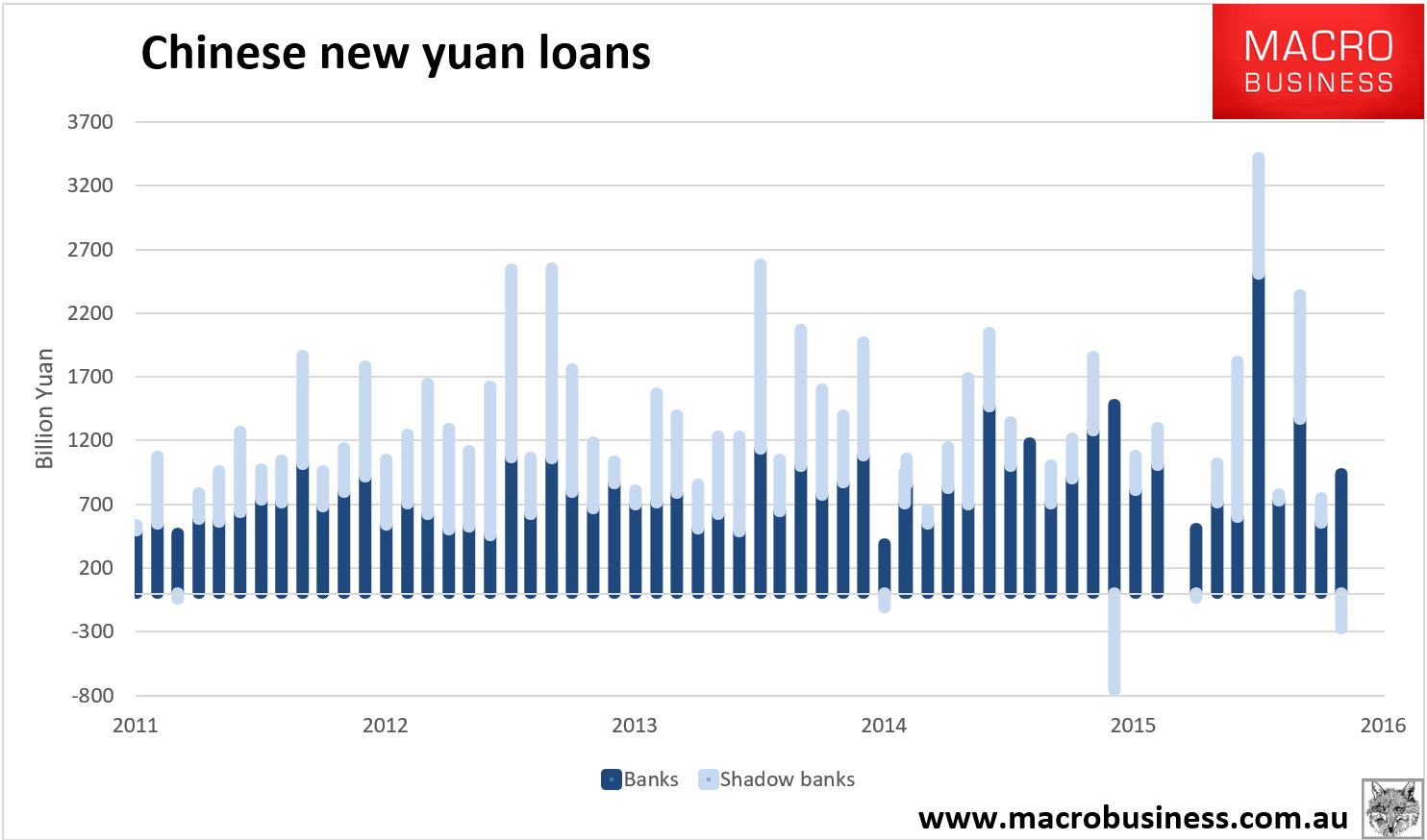 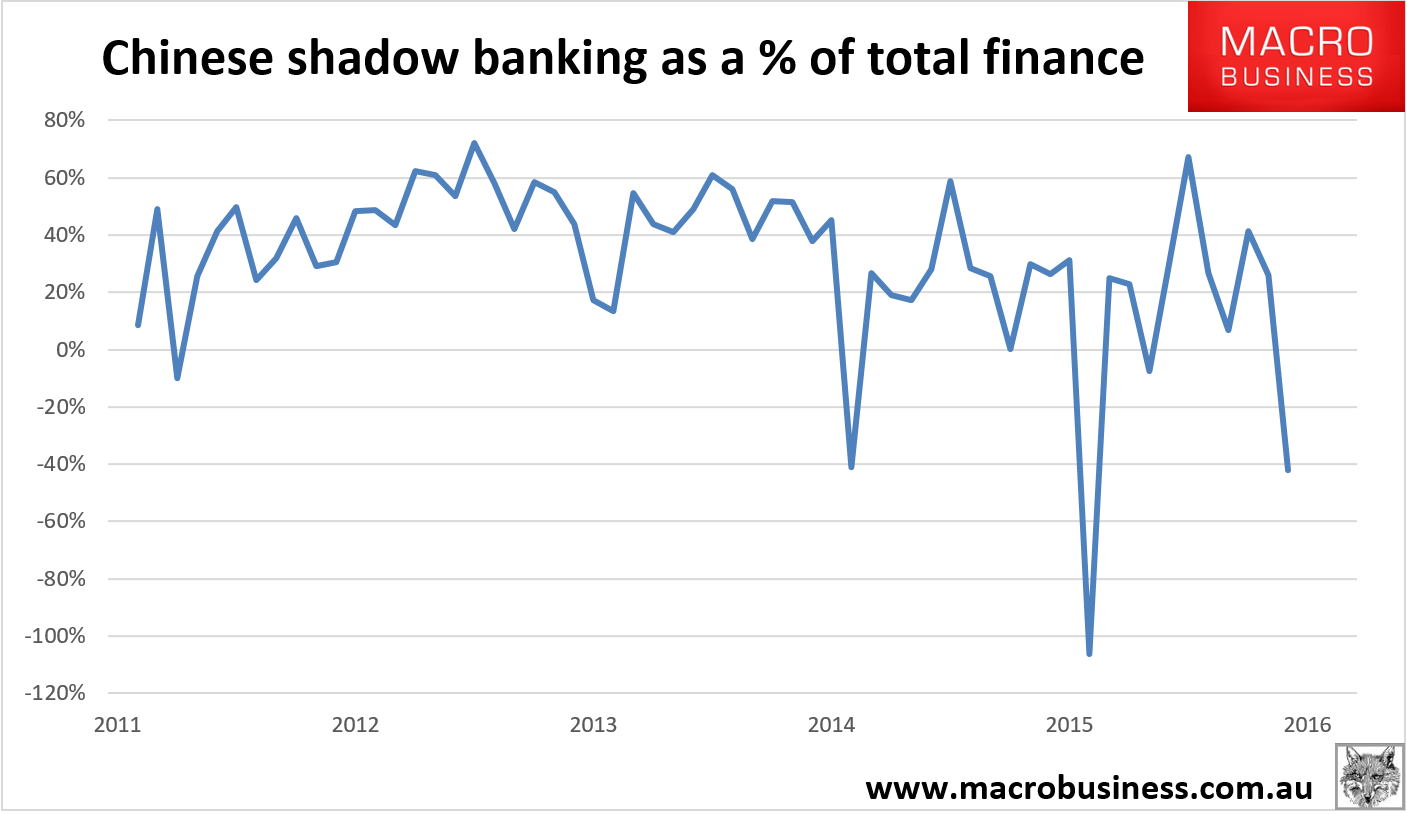 The crackdown is set to continue, from UBS: 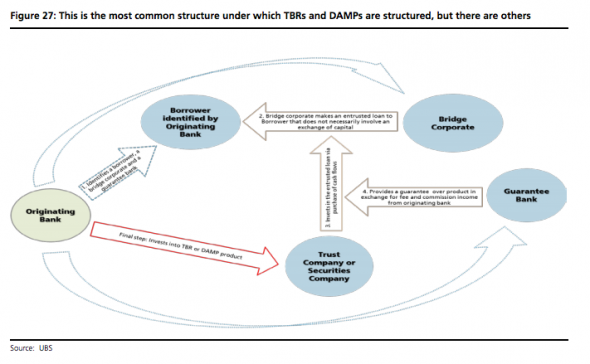 …the fastest-growing assets in H115 for listed banks(excluding the big five commercial banks, which still continue to have immaterial holdings of these assets—see Figure 3), with shadow loan growth of Rmb1.4trn versus Rmb1.2trn loan book growth.

Q: Are the regulators closing the shadow loan loophole?

Yes. Document 82 effectively limits, and in the case of certain specified activities, completely closes a loophole that has allowed banks to build up trillions of Rmb of loans outside of their loan books as investments—all of which avoid the far stricter provisioning, asset quality disclosure and risk weightings that accompanies loans. In particular, we believe the wording of Document 82 signals a hardened resolve by the regulators to crack down on the use of these assets in understating NPL ratios. Given the size of TBR and DAMP investments (we estimate they stand at Rmb12.6tn as at end- 2015) and their concentration in weaker subsets of the banking sector, the regulation is likely to be accompanied by a grace period.

Yes. Any changes whatsoever to the risk weighting and provisioning of TBRs and DAMPs will have a direct impact on capital levels. We estimate this regulation will result in capital needs of between Rmb1.1trn and Rmb1.46trn. Even in a banking sector the size of China’s, this would be material. To put those figures in context, the total equity generated by the commercial banking sector from 2014 to 2015 was Rmb1.8trn. The capital requirements could be even higher, potentially even in excess of Rmb2.8trn if banks are required to apply the same non-performing asset recognition standards to these assets as they do their loan books (something we think is highly unlikely). Given the scale of capital that could be needed (and the concentration of those capital needs in certain subsets of the banking sector), we expect the impact of the regulation to take place gradually over multiple quarters.

Q: What are the implications for the bank sector?

While Australia’s terms of trade resume their crash through the second half as China slows, we can comfort ourselves that the plight of these young women is being alleviated.