Yves here. This intriguing paper curiously fails to consider how climate change can (will) affect the patterns they describe. And it also fails to give clues as to why some cities keep gaining population and income and others fall by the wayside. For instance, Atlanta and Birmingham, Alabama were of comparable size in the 1970s, yet Atlanta has grown while Birmingham stagnated. And Birmingham has some advantages, for instance, having the best medical school in the South.

e persistence of economic fortune over the long run has been the subject of intense research. This column investigates the persistence of patterns of economic activity in the Americas at the sub-national level over the last half millennium. The location of today’s prosperous cities and regions within each country is closely correlated with the location of indigenous population centres before the arrival of Christopher Columbus in 1492. Policymakers seeking to make radical changes in the spatial distribution of economic activity should be mindful of the centuries-old, even pre-colonial, forces working against them.

Does economic fortune persist in the long run? This question has been the object of intense research. While some studies find a reversal at the national level for colonised countries (Acemoglu et al. 2002), others show that the geographical patterns of population and prosperity have largely persisted even for thousands of years (Comin et al. 2010, Ashraf and Galor 2013, Davis and Weinstein 2002, Chanda et al. 2014).

The question of persistence is important as it speaks to the role of geography, agglomeration, institutions, and other deep-rooted factors of comparative economic development. It also contributes to recent discussions about the role of pre-colonial versus colonial determinants of economic development (for the African case, see Gennaioli and Rainer 2007, Michalopoulos and Papaioannou 2013). Ultimately, this type of research helps to inform the debate about path dependence and place-based policies (see, for example, Ades and Glaeser 1995, Bleakley and Lin 2002). In our research, we provide new evidence of persistence from pre-colonial times using data at the sub-national level for the Americas (Maloney and Valencia Caicedo 2016).

For modern-day policymakers, the reality of such long-term continuity implies first, that there may not be anything ‘optimal’ about the present distribution of economic activity – agglomeration effects may simply be driven by economic considerations millennia old. Second, this same consideration may prove challenging to any grand-scale efforts to alter long-existing spatial and urban patterns.

We focus on the Americas, and follow the literature in taking the continent as a large historical natural experiment. We are also aided by the availability of precise anthropological and archaeological data, the product of a long tradition of research summarised in William Denevan’s 1992 book and used recently by Bruhn and Gallego (2012). These historical measures of population density can be seen as what they are, but also, following Malthus, as a proxy for prosperity.

We test for the continued influence of this variable as we control for standard geographical and weather controls, suitability for agriculture, river network density, ruggedness, and prevalence of malaria. We use country fixed effects to net out the effect of national level variables such as policies and institutions, as well as different estimators to assess the potential role of outliers.

We reach three main conclusions in our research. First, and most surprisingly, we document that settlements today are located where there used to be pre-colonial settlements. This persistence is far from obvious given that in many cases the original indigenous populations were practically eradicated during the colonisation process.

We also show that certain geographical and weather characteristics – most notably agricultural suitability, distance to the coast and malaria prevalence – were important in determining where indigenous people settled in the first place.

Lastly, we show that places that used to be rich also tend to be richer today. Massachusetts and California, for example, had the highest density of native Americans – roughly the same average level as Chile and Argentina – in the territory that would become the United States, and they are among the richest regions today.

That is largely true too among Spain and Portugal’s colonies in the hemisphere. In Colombia, there is a strong correlation of pre-colonial population density and both population and income per capita (see Figure 1). Mexico City, the richest city in Latin America, was founded on top of Tenochtitlan, the ancient capital of the Aztecs, itself the most densely populated pre-colonial area in the hemisphere. 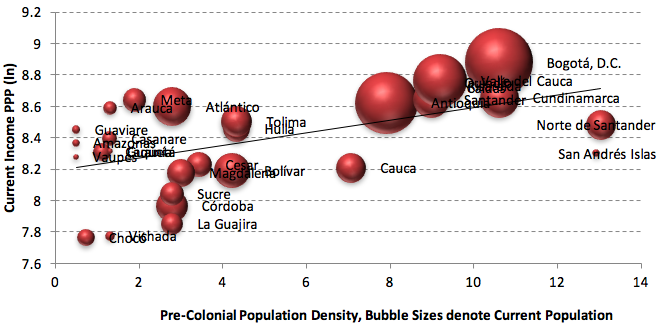 The persistence of demographic and economic activity could work through different channels. Geographical determinants aside, agglomeration effects arise from path dependence à la Krugman. This in turn might be the product of externalities and complementarities in production, as hypothesised by Marshall.

Geographical factors appear to be important in explaining initial indigenous settlements. California, for example, had and retains rich farmland, a productive coast, and a temperate climate. But ‘locational fundamentals’ are not enough to explain the patterns we see; controlling for a rich set of geographical fundamentals does not eliminate the importance of pre-colonial density for present population density and income.

Further, history provides important counterexamples. The Aztec capital Tenochtitlan was founded on a small, swampy island whose chief attraction appears to be that it was not coveted by the neighbouring tribes. Its weather was unreliable, its growing season was short and famine was not uncommon. Moreover, frequent flooding inundated the city with its own filth, breeding epidemics. But in founding Mexico City on top of Tenochtitlan, Hernan Cortés was clear about what was attractive:

This great city of Tenochtitlán is as big as Seville or Córdoba […] It has many plazas where commerce abounds, one of which is twice as large as the city of Salamanca […] and where there are usually more than 60,000 souls buying and selling every type of merchandise from every land […] There are as many as forty towers, all of which are so high that in the case of the largest there are fifty steps leading up to the main part of it and the most important of these towers is higher than that of the cathedral of Seville. The quality of their construction, both in masonry and woodwork, is unsurpassed anywhere. (La Gran Tenochtitlán, Segunda Carta de Relación, 1522).

In short, he valued not only the available labour force, but also the area’s pool of skilled artisans, dense commercial networks, organisational structures, and collective knowledge – attributes that we associate with dynamic cities and dense population agglomerations. Similar phenomena are present in North America, where British, French, and Dutch explorers used indigenous knowledge, maps and trade routes to survive and establish colonies, trading posts, and fur-trading networks.

The finding of persistence is also somewhat surprising, as other research has stressed a ‘reversal of fortune’ at the national level – a finding that we replicate in the aggregate for the Americas. This reversal is attributed to the emergence of growth-inhibiting exclusionary institutions arising from the need to control larger indigenous populations. Although we find some evidence for this – we confirm that slavery has a depressive effect on current social outcomes – the forces leading to persistence appear to dominate at the sub-national level. We do not find, for example, any effect of pre-colonial density on income inequality.

Argentina offers an interesting exception to the pattern of sub-national persistence. Its reversal was mostly due to the removal of royal prohibitions on trade with Spain through the Atlantic port of Buenos Aires. That policy change meant that goods no longer had to be hauled over the Andes to Lima, Peru on the Pacific Ocean, and then back overland to the Atlantic Ocean. Releasing this once-suppressed geographical comparative advantage was a powerful shock to geographical fundamentals.

But this seems to be the exception to the rule, and policymakers attempting to make radical changes in the spatial distribution of economic activity should be mindful of the centuries-old, even pre-colonial, forces working against them.