Americans have long debated when the country became the world’s economic leader, when it became so unequal, and how inequality and growth might be linked. Yet those debates have lacked the quantitative evidence needed to choose between competing views. This column introduces evidence on American incomes per capita and inequality for two centuries before World War I. American history suggests that inequality is not driven by some fundamental law of capitalist development, but rather by episodic shifts in five basic forces: demography, education policy, trade competition, financial regulation policy, and labour-saving technological change.

When did America become the world leader in average living standards? There is little disagreement about how American incomes have grown since 1870, thanks to the pioneering work of Simon Kuznets and many others. Yet income estimates are weak and sparse for the years before 1870. In spite of that, our history textbooks imply that the road to world income leadership was paved by the institutional wisdom of the Founding Fathers and those who refined it over the two centuries that followed. While those institutions were well chosen, in a new book we show that British America had attained world leadership in living standards long before the Founding Fathers built their New Republic (Lindert and Williamson 2016). Furthermore, the road to prosperity was far bumpier than the benign textbook tales of American economic progress imply.

Was income ever distributed as unequally between the rich, middle, and poor as it is today? As we are constantly reminded, the rise in US inequality over the half century since the 1970s has been very steep. The international research team led by Atkinson et al. (2011) has charted the dramatic 20th century fall and rise of top incomes in countries around the world, including the US. However, until now evidence was not available for before WWI. Thus, there is still no history of American income inequality for the two centuries before WWI, aside from a few informed guesses. We now supply that distributional evidence back to 1774.
A new approach with new data

Armed with new evidence, we apply a different approach to the historical estimation of what Americans have produced, earned, and consumed. National income and product accounting reminds us that we should end up with the same number for GDP by assembling its value from any of three sides – the production side, the expenditure side, or the income side. All previous American estimates for the years before 1929 have proceeded on either the production or the expenditure side.

We work instead on the income side, constructing nominal (current-price) GDP from free labour earnings, property incomes, and (up to 1860) slaves’ retained earnings (that is, slave maintenance or actual consumption). Our social tables build national income aggregates from details on labour and property incomes by occupation and location for the benchmark years 1774, 1800, 1850, 1860 and 1870. No such income estimates were available for any year before 1929 until now.

Our unique approach leads to big rewards. One reward is the chance to challenge the production-side estimates using very different data and methods. As we see below, our estimates are often dramatically different. An even bigger reward is that the income approach exposes the distribution of income by socio-economic class, race, and gender, as well as by region and urban-rural location.

America actually led Britain and all of Western Europe in purchasing power per capita during colonial times. Britain’s American colonies were already ahead by 38% in 1700 and by 52% in 1774, just before the Revolution (Figure 1). Angus Maddison’s (2001) claim that American income per capita did not catch up to that of Britain until the start of the twentieth century is off by at least two centuries. 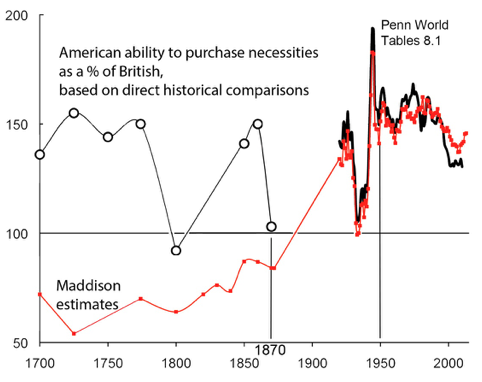 But note the vulnerability of America’s relative income per capita to costly wars. Fighting for independence may have cut American income per capita by as much as 30% between 1774 and 1790. The causes seem clear – war damage, mortality and morbidity among young adult males, the destruction of loyalist social networks, a collapse of foreign markets for American exports, hyper-inflation, a dysfunctional financial system, and much more. Then, by 1860, the young republic had regained its big income lead, this time by as much as 46%. This was a period of rapid catching up with and overtaking of Western European per capita incomes, including that of Britain. Fast per capita income growth and even faster population growth made the America the second biggest economy in the world by 1860. However, the US lost most of that big lead (again) during the destructive Civil War decade. It gained the lead back once more by 1900, and briefly lost it (again) in the Great Depression of the 1930s.

American colonists probably had the highest fertility rates in the world, and their children probably had the highest survival rates in the world. Thus, the colonies had much higher child dependency rates, and family sizes, than did Europe – and even higher than the Third World does today. What was true of the colonies was also true of the young Republic. It follows that America’s early and big lead in income per capita was exceeded by its early lead in income per worker.

Colonial America was the most income-egalitarian rich place on the planet. Among all Americans – slaves included – the richest 1% got only 8.5% of total income in 1774. Among free Americans, the top 1% got only 7.6%. Today, the top 1% in the US gets more than 20% of total income. Colonial America looks even more egalitarian when the comparison is by region – in New England the income Gini co-efficient was 0.37, the Middle Atlantic was 0.38, and the free South 0.34. Today the US income Gini is more than 0.5, before taxes and transfers. Colonial America was also far less unequal than Western Europe. England and Wales in 1759 had an income Gini of 0.52,and in 1802 it was 0.59. Holland in 1732 had an income Gini of 0.61, and the Netherlands in 1909 had 0.56. Also, if you agree with neo-institutionalists that economic equality fosters political equality, which fosters pro-growth policies and institutions, then America’s huge middle class is certainly consistent with the young republic’s pro-growth Hamiltonian stance from 1790 onwards. That is, the middle 40% of the distribution got fully 52.5% of total income in New England, the cradle of the revolution!

As Figure 2 shows, it did not stay that way. A long steep rise in US inequality took place between 1800 and 1860, matching the widening income gaps we have witnessed since the 1970s. The earlier rise was not dominated by a surge in the property income share, as argued by Piketty (2014). Rather, this first great rise in inequality was broadly based, with widening income gaps throughout the whole income spectrum – rising urban-rural income gaps, skill premiums, gaps between slaves and the free, North-South income gaps, earnings inequality, and even property income inequality.

Figure 2 Income inequality in America, Britain, and the Netherlands, 1732-2010 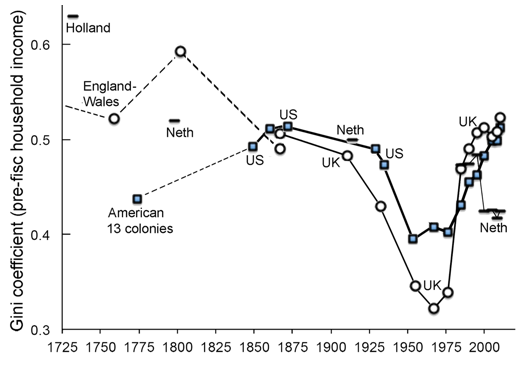 From 1870 to WWI, American inequality moved along a high plateau with no big secular changes. Rather, the big drama followed afterwards. Figure 3 documents that the income share captured by the richest 1% fell dramatically between the 1910s and the 1970s, and the share of the bottom half rose, for almost all countries supplying the necessary data. This ‘Great Levelling’ took place for several reasons. Wars and other macro-shocks destroyed private wealth (especially financial wealth) and shifted the political balance toward the left. The labour force grew more slowly and automation was less rapid, improving the incomes of the less skilled. Rising trade barriers lowered the import of labour-intensive products and the export of skill-intensive products, favouring the less skilled in the lower and middle ranks. And in the US, the financial crash of 1929-1933 was followed by a half century of tight financial regulation, which held down the incomes of those employed in the financial sector and the net returns reaped by rich investors. We stress that this correlation between high finance and inequality is not spurious. Individuals with skilled financial knowledge have been well rewarded during the two inequality booms, and heavily penalised during the one big levelling (or two, if the 1776-1789 years are included). 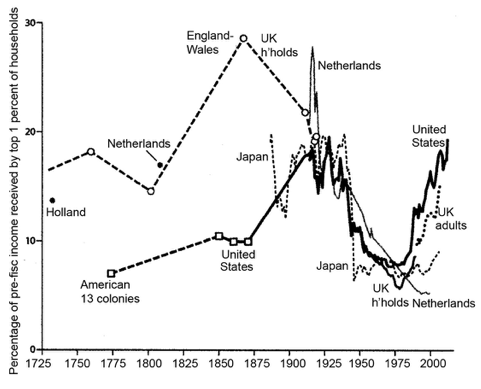 The equality gained in the US during the Great Levelling slipped away after the 1970s. The rising income gaps were partly due to policy shifts. The US lost its lead in the quantity of mass education, and its gaps in educational achievement have widened relative to other leading countries. Financial deregulation in the 1980s also contributed powerfully to the rise in the top income shares and also to crises and recessions. A regressive pattern of tax cuts allowed more wealth to be inherited rather than earned. These policy shortfalls are, of course, reversible and without any obvious loss in GDP.

American history suggests that inequality is not driven by some fundamental law of capitalist development, but rather by episodic shifts in five basic forces – demography, education policy, trade competition, financial regulation policy, and labour-saving technological change. While some of these forces are clearly exogenous, others – particularly policies regarding education, financial regulation, and inheritance taxation – offer ways to check the rise of inequality while also promoting growth.