Consider the new through-the-looking-glass world of banking crises circa 2016: bankers are now actively stoking fears so as to force officials to give bailouts.

In 2008, wobbly banks were all doing their utmost to persuade their counterparties and Mr. Market that they were just fine. Remember how monolines fruitlessly told analysts that their insurance contracts were drafted so that they didn’t have to post collateral and it would be decades before they’d have to settle up on the losses on their subprime guarantees? How about the crisis poster child Lehman, which spent months insisting that short seller David Einhorn was all wet? Lehman not only engaged in bogus accounting on a mass scale (its Repo 105 was the biggest single item, but it was also posting impossibly optimistic valuations on California commercial real estate ventures Archstone and SunCal), it even managed to stick JP Morgan with collateral so rancid that Lehman staffers called it “goat poo”. And mind you, even though Goldman Sachs was madly squeezing AIG for as much cash as it could extract, Lloyd Blankfein was not broadcasting to reporters that AIG or other major financial firms were on the ropes.

By contrast, we now have senior bank executives pushing the story that Italian banks, and now from Deutsche Bank’s chief economist, large European banks generally, are in bad shape. This is hardly news to anyone who has been paying attention. Big European financial firms went into the crisis with lower equity levels on average than their US counterparts. European officials also did less than Americans did to press their charges to clean up (the FDIC forced Citigroup to downsize considerably, for instance). American regulators were more insistent about having banks boost their capital levels.

Moreover, even though US growth has been lackluster, Europe has teetered on the verge of contraction. That means a worse environment for bank profits even before you get to the impact of zero and increasingly negative interest rates. Normally, the first line of defense for a company to improve its equity levels is retained earnings. That’s not a promising source for many European banks.

So why are prominent banking figures, contrary to the time-honored practice of talking up the Confidence Fairy, conveying bad news to the degree that it looks like they are trying to spook investors? This is what Bini Smaghi, the chairman of Societe Generale, said last week:

“The whole banking market is under pressure,” the former European Central Bank executive board member said in an interview with Bloomberg Television on Wednesday. “We adopted rules on public money; these rules must be assessed in a market that has a potential crisis to decide whether some suspension needs to be applied.”

The chief economist of Deutsche Bank calls a multibillion dollar bailout for European banks. The institutions should be equipped American-style with fresh capital. At that time the government had stepped in 475 billion dollars. “In Europe, the program must not be so large. With 150 billion euros can be European banks recapitalize,” said David Folkerts-Landau…

The decline in bank stocks is only the symptom of a much larger problem, namely a fatal combination of low growth, high debt and a proximity to dangerous deflation. “Europe is seriously ill and needs to address very quickly the existing problems, or face an accident,” said the chief economist.

Brexit worries have forced what is commonly called a recognition event. And the only way to escape an untested, Rube Goldberg EU-wide scheme for dealing with sick banks is to create a real crisis so that the authorities can break glass and do something else….like bailouts or nationalizations. Folkerts-Landau is explicit in making a case against bail-ins, which wipe out shareholders and next bondholders, working up from the most junior to the most senior. While that ordinarily sounds like a fine idea (after all, these are supposed to be sophisticated investors who signed up to provide risk capital), in Italy, as also happened on a large-scale basis in Spain, depositors were persuaded by bank employees to buy other instruments, in the Italian case bonds, and were falsely told they were just as safe as deposits. From the Financial Times in February:

Pressure on the central bank rose in November after the rescue of four small regional banks in central Italy dealt big losses to thousands of retail investors as a result of new EU requirements on how to manage bank failures.

And the savers’ exposure is large. This article (in Italian) estimates it at €60 billion, which is larger than the €40 billion estimated size of an Italian bank rescue. Note that it also points out that most of these bond sales were fraudulent. And the priceless part? Italian economist Thomas Fazi believes this pilfering of depositors started when ex-Goldman banker Mario Draghi was head of the Bank of Italy.

It’s not that the condition of banks has suddenly taken a turn for the worse, but that fear of a Brexit has cut off the most plausible escape routes for the banks ex the goner Italian banks to get out of their mess, which is selling shares to the public.

Banks stocks have taken a big hit since the Brexit vote, and those of the weakest megabank, Deutsche, See this chart from the Visual Capitalst and note the decay from late June: 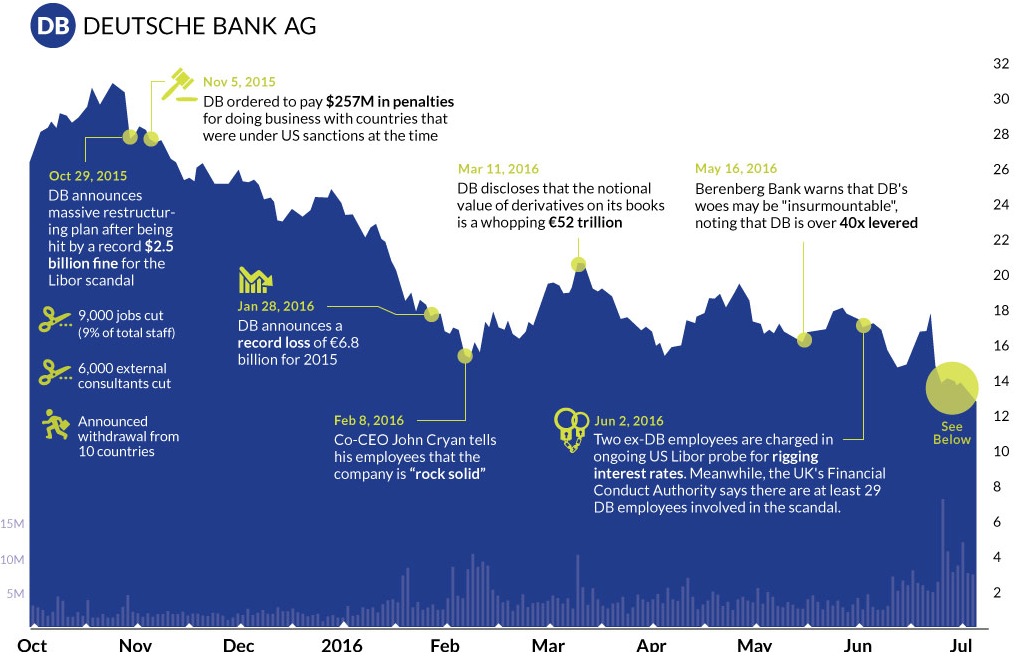 As we wrote last week, Italy has been trying to persuade European officials to allow it to sidestep bail-in rules that are part of the new EU-wide banking regime that came into effect in January. As we pointed out, perversely, Italian banks have been to a large degree a victim of the crisis itself, as opposed to pre-criss recklessness. They have seen non-performing loans rise as a result of the direct damage of the sharp contraction in the economy and the protracted malaise. They also managed to wrong-foot the post crisis era, failing to do enough to boost bank capital levels, either though state aid or forcing them to sell equity.

Italian premier Matteo Renzi, having failed early in the year to get a waiver so as to allow Italy to provide an estimated €40 billion to a good bank/bad bank scheme (the sort used successfully in the US savings & loan and in Sweden’s early 1990s banking crises), made a personal appeal to Merkel in the wake of the Brexit upheaval and was again rebuffed. From the Financial Times on June 27:

Brussels has in the past warned Italy that there are no signs of crisis threatening financial stability. It has also argued that a capital injection would fall foul of the new bail-in rules in the Bank Recovery and Resolution Directive.

“Germany would be out of its mind to be sharing sovereignty and risk with a country that behaves in this manner,” said one senior European official involved in debate over Italian banks. The official called Italy’s attempted exploitation of the Brexit situation “cynical”.

If you read between the lines, you can see that the Eurocrats are sticking firmly to their playbook, despite the fact that many experts deem it to be a train wreck in the making. If you read the section that describes emergency powers (Article 56 on p. 98), you can see it allows their use only in very limited circumstances. And if you track back the references to other sections of the directive, you can see its insistence that private sector options like bail-ins be exhausted before public monies are deployed.

So with this background, it becomes more obvious what Bini Smaghi and David Folkerts-Landau are up to. Deutsche Bank is next in line if the Italian banks start falling over or the bail-in start. The Financial Times last Friday described why the bank shares (and its co-co bonds, which would be converted to equity if certain triggers are met) have gone south in a very major way. Key points:

Deutsche Bank has had a difficult 10 days. Last week, one of its US businesses failed a Federal Reserve stress test for the second year running. Seven days ago, the International Monetary Fund called it “the most important net contributor to systemic risks” of the world’s big banks. Its shares on Friday — which have suffered violent swings all year — hit an all-time low…

In recent days, it is Deutsche’s trading business that has attracted most attention. Matteo Renzi, Italy’s prime minister, on Wednesday claimed — in an intervention read by some as a swipe at Deutsche — that Italy’s wobbly banks were less of a headache than “the question of derivatives at other banks, at big banks”.

Rival bankers often make similar points, raising concerns about Deutsche’s large stock of “level 3” assets, which are so illiquid that they cannot be valued based on market prices….the assets are worth some 70 per cent of Deutsche’s total common equity — a lower level than at Barclays and Credit Suisse, but higher than at Deutsche’s US rivals, JPMorgan, Goldman Sachs, and Morgan Stanley…

Yet despite rival bankers’ focus on these more exotic assets, analysts and investors say the biggest challenges for the bank are more prosaic.

“The problem for Deutsche is that they have weak revenues, they have a lot of litigation hanging over them, and they have weak capital,” says one of the bank’s 20 biggest investors.

Translation: there is very little to like. The article also says the best course available for Deustche is to sell assets. But that’s merely the best of bad options. Generally, distressed companies wind up selling their stronger businesses when they are desperate, leaving an even weaker remaining enterprise. And given the worries in the banking industry, it’s not as if the German behemoth is likely to fetch good prices.

Let us return to Folkerts-Landau’s rescue sales pitch. The subhead of the story reads: “Private creditors should not participate.” The Deutsche bank economist argues that the bail-ins will do more harm than good. And even if you agree with the premise that bond fide bond investors should take a hit, as opposed to Italian depositors that were snookered, the one-size-fits-all bail-in rules don’t allow for such surgical distinctions.

Now I am sure Folkerts-Landau, if challenged, would deny that his warning about the need for a broader European bank rescue applies first and foremost to his employer, Deutsche Bank. But even if he actually believes his own PR, it is not hard to see the implications of his stark warning.

So the Renzi/bank executive view is leagues apart from where Merkel, her finance minister Wolfgang Schauble, and banking authorities are. They appear unwilling even to consider that their shiny new rules toy bail-in regime will blow up in their first large-scale use, and that their prized Deutsche Bank is likely to be part of the collateral damage. They are treating Renzi’s pleas as whinging, as opposed to a better course of action than the default path.

Given the German fixation with rules and Brussels’ inability to admit error, we are now in a race of sorts. Will market professionals succeed in creating the perception that a disaster at Deutsche, which is clearly too big to fail, is imminent, and thus force the Eurocrats’ hand? Deustche’s share price now €11.74; some experts think a drop below €10m would put regulators on high alert. Or will the Italian banks instead be forced into bail-ins and produce a slow-motion unraveling across Europe? Stay tuned.