New Zealand Foreign Trusts, to be radically reformed after the recently-announced wholesale adoption of the Shewan report’s recommendations, are just the tip of the iceberg in terms of the ethically challenged and outright criminal use of a range of New Zealand corporate entities overseas.

Aside from trusts, New Zealand registered companies, financial service providers and building societies all feature too. Countries as diverse as Brazil, China, Malta, Latvia, Denmark, and the United States have felt their impact. Ponzi schemes, drugs, arms, tax scams and money laundering all feature alongside the simply bizarre. Usually the perpetrators are not New Zealanders. But New Zealanders have proven themselves willing to act as fronts for some very dodgy people offshore.

Concern about the behaviour of NZ registered, but overseas operating companies ramped up after the activities of shell company SP Trading came to light in 2009.

The aircraft was forced down while travelling over Thai airspace. When investigated in Bangkok it was found to contain 35 tonnes of North Korean weaponry including rocket-propelled grenades, missile and rocket launchers, missile tubes, surface to air missile launchers, spare parts and other heavy weapons to an estimated value of US$18 million. In the extensive publicity of the incident that followed there was considerable focus on the fact that the lessee of the plane was a New Zealand registered shell company [SP Trading].

This extract is taken from a High Court judgment from Justice Raynor Asher. The judgment blocked an attempt by Lu Zhang, the sole director of SP Trading whose day job was flipping burgers at Burger King, to be discharged without conviction having pleaded guilty to making 74 false statements under the Companies Act. (She was convicted and discharged without further penalty).

The weapons on the plane were bound for Iran in contravention of United Nations sanctions.

Since then, curious dubious, or outright criminal overseas activities of dodgy New Zealand companies, financial service providers, building societies and foreign trusts have remained in the news somewhere or other, almost unabated.

Through the map below we have highlighted the activities of many of these entities, and the parts of the world where their activities have been felt, and in some cases where the perpetrators were located. It goes without saying that theses activities have not bolstered NZ’s international reputation.

Hovering your mouse over the dots on the map will bring up headlines and links to stories. We’ve mined our memories for a wide ranging smorgasbord. That said, there are undoubtedly others that could be here too, and we’re happy to take suggestions. 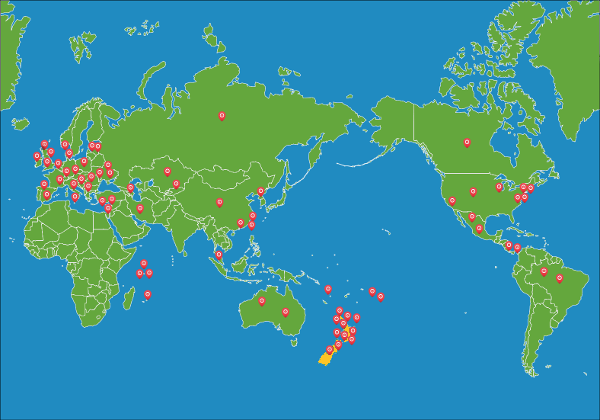 Punching above our weight

NZ is far from alone in having problems in the shadowy world of offshore finance. But the country, partly due to having a cheap and simple companies registration system, and being an easy place to do business, coupled with an international reputation for being among the least corrupt nations around, has proven ripe for exploitation.

Then there’s the Financial Service Providers Register (FSPR). In another unintended consequence, this has enabled overseas companies to register as NZ entities and operate solely overseas. In many cases these entities have erroneously claimed to be regulated or licensed in NZ. Or regulators in offshore jurisdictions have assumed quite reasonably that they are actually regulated in NZ.

As one overseas critic put it, the FSPR creates a scenario akin to handing out drivers licences to people who can go and drive anywhere in the world apart from in NZ. And if they cause carnage and crashes, “it’s not your remit, you don’t care.”

Then there’s the Anti-Money Laundering and Countering Financing of Terrorism Act (AML/CFT Act). The guidelines on the territorial scope of the AML/CFT Act state; “An entity incorporated or formed in New Zealand, which carries on financial activities wholly outside New Zealand, will not be a ‘reporting entity’ under the AML/CFT Act.”

The problem with this is the potential it opens up for regulatory arbitrage. Regulators in other jurisdictions, where a NZ registered financial service provider is operating, may presume that – hailing from a well-regarded country like NZ – the financial service provider is overseen for AML/CFT Act compliance in its apparent homeland. But unfortunately this often simply has not been the case.

In 2014 the Financial Markets Authority (FMA) was given powers to deregister entities from the FSPR if it considers their registration creates a misleading impression about the extent that entity is regulated in NZ, or will damage the integrity or reputation of NZ’s financial markets. The FMA recently provided us with a list of 64 entities it has had deregistered from the FSPR since obtaining that power.

Of those 64, 35 remain as NZ registered companies.

This begs the question; if a company is deemed unfit to be on the FSPR, why it is deemed fit to remain a registered NZ company?

Asked about this a Companies Office spokeswoman said; “The two regimes have different purposes and are not linked to each other (although the two registers do interact in some circumstances).”

Changes made to the Companies Act in 2014, to help crack down on the misuse of NZ’s company registration regime, mean all new companies incorporated from May 1 last year need to:

Provide date and place of birth of all directors (this is not publicly available).

Have at least one director who lives in New Zealand; or lives in Australia and is also a director of an Australian incorporated company.

Provide details of any ultimate holding company if applicable.

This, according to the Companies Office, means there’s “an easily locatable and contactable point of contact” who can be held liable for the company.

Alas, that’s what Lu Zhang was in the case of SP Trading. And she proved to be no more than a patsy.

And we recently brought you the story of Fennas Finance. This NZ company was registered on May 20, 2015 (after the Companies Act changes took effect) and then helped a shadowy offshore entity use an ANZ bank account as a Ponzi scheme depository.

Again, this has often proven to simply not be the case: witness Euro Forex. Sophisticated international crooks are very adept at taking a slice of NZ, a pinch of the UK, and a dollop of somewhere else, and hey presto! A crooked investment scheme is ready for sale into Asia.

Thus a great deal of cross border regulatory cooperation is required to combat this activity. From a NZ perspective, it’s not clear enough of this is happening.

If it was, would, for example, John David Beckett, aka Lord Taylor of Warwick, have been able to be a director of Vivier and Company between September 3 and November 23, 2014? A member of Britain’s House of Lords, he was jailed in 2011 for false expense claims, and disbarred in 2012 for “conduct discreditable to a barrister.”

With the Panama Papers having shone a spotlight on NZ foreign trusts, we’ve recently had an inquiry into their very limited disclosure rules. And just last week, the Government completed its review of NZ’s FSPR.

In the FSPR review there’s one question that should be seriously considered. The FSPR was established in part to help NZ meet its Financial Action Task Force (FATF) obligations before the AML/CFT Act took effect in 2013. FATF is an inter-governmental body established by the Group of Seven that sets international policies and standards on anti-money laundering and combating terrorist financing.

So now the AML/CFT Act is in place, and most legitimate financial service providers must comply with some form of licensing obligation, does NZ even need a FSPR?

Here’s hoping some good decisions come out of both reviews.

Further reading: this is the fourth article in a series about New Zealand’s role in the offshore finance world. Below are headlines from, and links to, the other articles in the series:

New Zealand: Icon Sachs (Whatever That is), Fennas Finance, a Bank Account at an ANZ Napier Branch, a Conspiracy Theorist And a Ponzi Scheme