Yves here. It’s gratifying to see an article that uses as a central observation something we’ve pointed out: the first two generations of the Industrial Revolution led to a decline in living standards of most laborers, particularly in England. This piece looks at the parallels between the past industrial revolutions and the post-industrial revolution now underway, and anticipates that the results will include deglobalzation and more political shocks.

It is ironic that the “millionaire’s factory” at Macquarie Bank has produced an uncannily similar strategic outlook to my recent discourse The Battle for Globalisation will be Lost in Europe using Karl Marx as its touchstone. It is essential reading:

In this latest issue, we discuss the impact of labour force structural changes on investment strategies. In our view, this is the key investment driver and whilst history never repeats itself, it does rhyme and tends to be an excellent guide.

Louis-Napoleon Bonaparte had the unique distinction of being the last French emperor and the first democratically elected French president. His sweep to power by a popular vote in 1848 was achieved by relying on what Karl Marx described as ‘lumpenproletariat’ vote. What is ‘lumpenproletariat’? In Marxist theory these are sections of society that slipped below conventional occupations, and hence no longer belong to either proletariat or capital and financial classes. As described in greater detail in the note, according to Marx it includes various groups, ranging from “discharged jailbirds and vagabonds to pickpockets, tricksters, pimps, porters, tinkers….disintegrated mass, thrown hither and thither.’ It was the same group that concurrently fuelled the rise of the powerful ‘anarchist’ movement, dedicated to ‘blowing up the system’, heightening social and geopolitical tensions led mostly by well-to-do and educated elite. 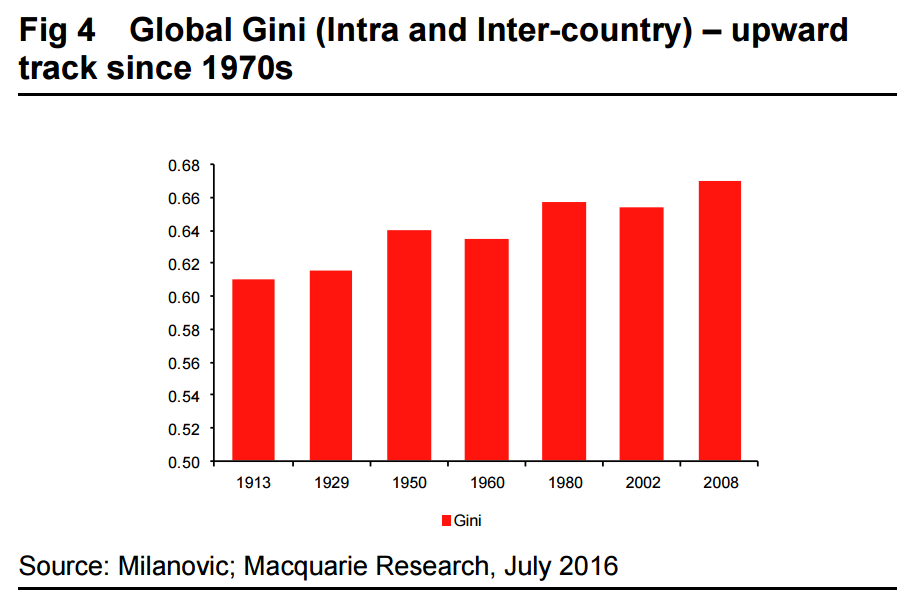 Does this sound familiar? It should, as essentially in modern terminology, Marx was describing disintegration of a traditional order under the pressures of the First and Second Industrial Revolutions; societal dissatisfaction and the rise in income & wealth inequalities, culminating in the ‘gilded age’ of the late 19th century. Given that modern economics is purely a flow science and does not recognize structural shifts or social classes, the term ‘lumpenproletariat’ has fallen into disuse. It is a pity, as we believe it describes much better the dislocating changes occurring in the labour force and its social and political implications, than modern preferred alternatives (‘gig economy’, ‘fissured employment’, ‘angry white men’) and its impact on political process in countries as diverse as the US, UK, France, Austria or Turkey. As electorate shifts either to the right or left, the underlying drivers are identical (structural changes under immense pressures from the Third Industrial revolution and what we describe as declining returns on humans that are permanently altering nature and value of human inputs). We are even acquiring a growing number of our own ‘anarchists’. 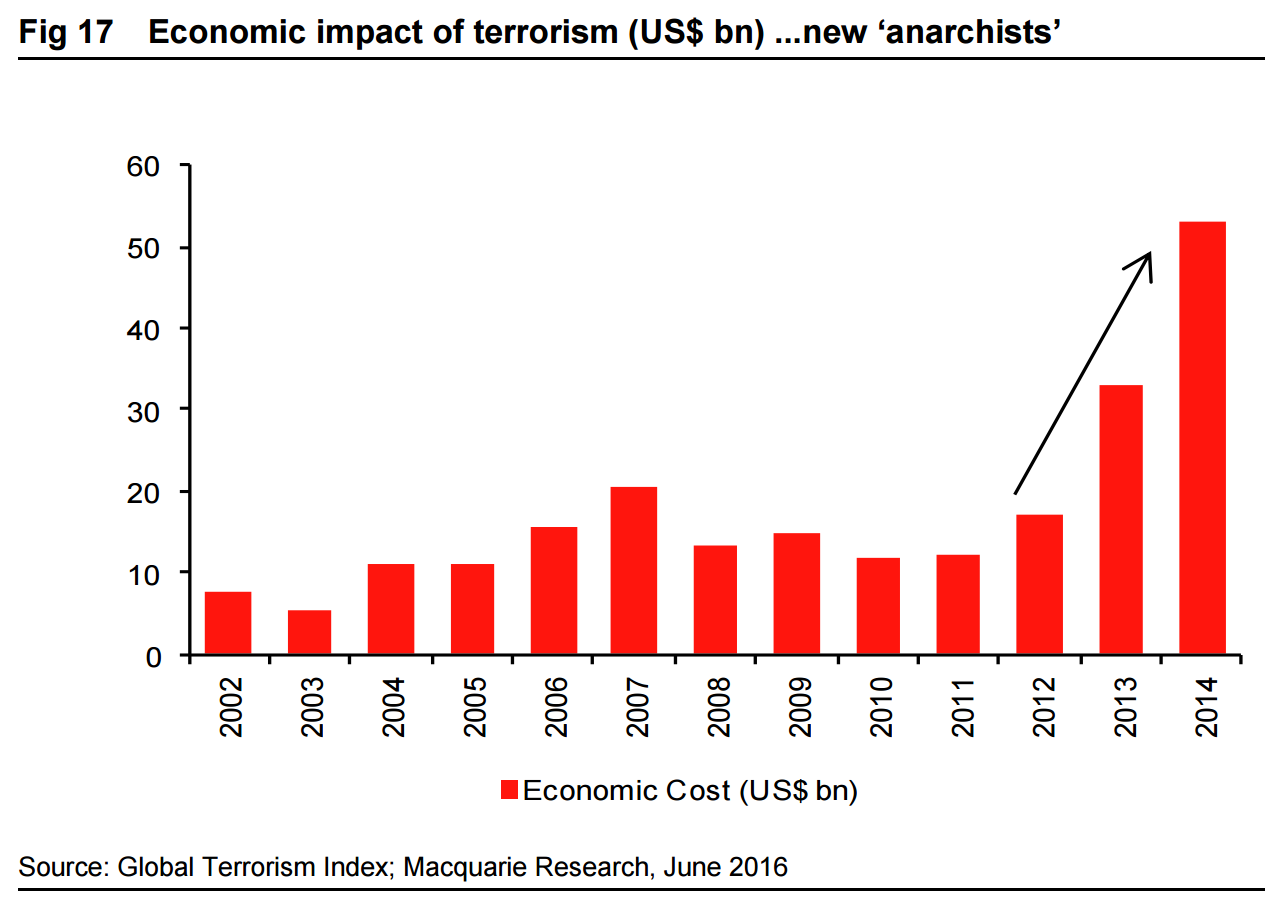 In this note, we used BLS stats (US) to estimate the extent to which the structure of the labour force is shifting towards the modern equivalent of ‘lumpenproletariat’ or more contingent and least-paid occupations. Our estimates indicate that its modern equivalent in the US could account for as much as 40%-45% of the labour force; around half of incremental growth and low productivity occupations constitute ~70% of employment. The same trend is evident in most other developed economies. Indeed these estimates understate the real impact due to lower benefits attached to these occupations; inability to secure jobs in line with qualifications or erosion of job and income stability. Investors might argue that this is just a reflection of an accelerated shift towards services and that new higher value jobs will eventually emerge. We agree but as societies in the 19th century discovered, eventually could be a very long time. 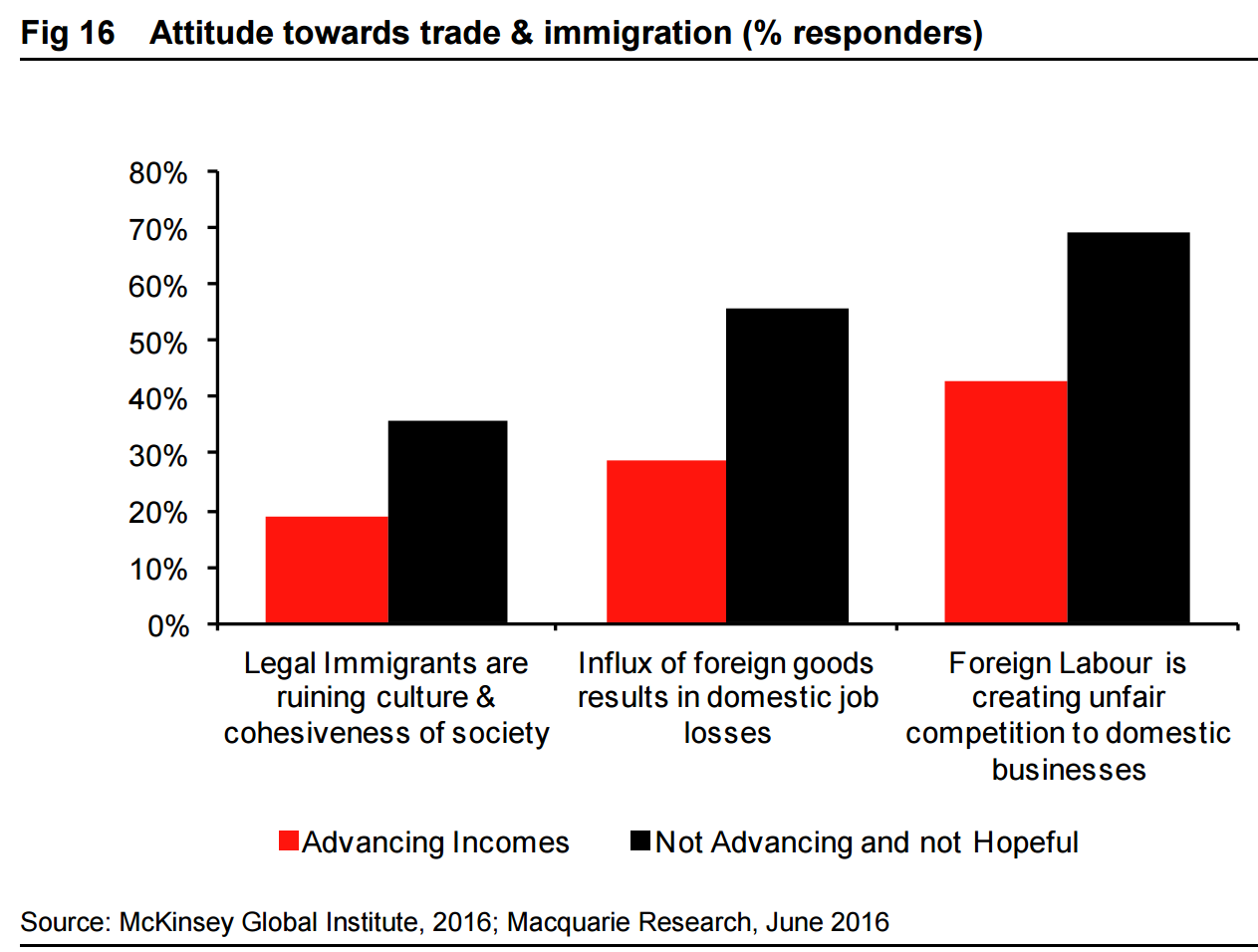 What are the investment implications? As discussed in our prior notes, we believe investors are entering a world where the pendulum is swinging rapidly in favour of the state, as a multiplier of demand, provider of capital and setter of prices. We also believe that we are entering the age of de-globalization, as societies demand (and get) greater protection from competition & immigration as well as greater support for local industries and employment. This implies that ‘Follow the Government’ and ‘Buy least efficient and most protected’ local stocks could emerge as the key strategy, replacing popular globalization themes.

I agree on everything argued here but diverge a little on the investment implications, as I wrote in my own note, the crucial difference is that where Macquarie sees an uninvestable environment in which nothing returns to mean pricing (that is, the end of the business cycle), I see an environment in which Black Swan events become more frequent and more extreme as political event risk overtakes the delicate machinery of financial globalisation:

Markets did not react at all to the French atrocity. They can’t. They do not know how to discount political risk, have virtually no way to hedge it, and they either won’t or can’t countenance asymmetric risk (that is “Black Swans). Rather quaintly, they believe central banks will protect them.  It is not that markets are a good judge of these things, they are not, and you should not believe that no movement in equity or other prices is a guide to the events of Europe being marginal. They are not.

The first point to make about asset allocations in this emerging environment is that it is as much higher risk of asymmetric shocks than the decades that preceded it. Thus the strategic narrative for allocations should reflect that risk. In general terms that will mean:

The second way to play deglobalisation is tactical. It is to go long (or short) on authorities response to the breakdown of their hopes and dreams (this is more the area that Macquarie occupies).

For Australian investors I see a persistently deflationary context as commodity prices keep falling (not all but the bulks important to Australia):

The post investment boom volumes will keep flowing for another two years offering support to GDP but income is going remain very hard to come by. After that the volumes will begin to fall as China keeps slowing and changing and incomes will improve a little. But then we’ll face a very difficult challenge of how to grow at all given:

Allocations are very dependent upon time frames, risk appetite, stage of life and other factors, and this post is an opinion not advice, but in terms of the deglobalisation trend that I now see as the dominant theme of the decade, I remain comfortable with:

The main risk to this outlook is that the globalisers panic earlier and harder than I expect. That would mean widespread “helicopter money” likely poured into infrastructure worldwide. That would present a better outlook for Australia as bulk commodities would be in higher demand, holding up prices, interest rates, the Budget and the dollar, as it improves the income outlook of the nation. Even so, I do not expect that to benefit property, it does not change the allocation to cash, bonds would fall but gold would rise.