Half of all US food produce is thrown away, new research suggests |Guardian (Brian C). Sheesh.

Trick or tweet, or both? How social media is messing up politics New Scientist (David L). I find this to be outrageous. How about the misinformation dispensed on a daily basis by the MSM? I also have to note that in the link identifier detail, which I strip out so as not to help the police state figure out where we got our links, this link repeatedly had a term I’ve never seen before, “webpush”.

Second EU referendum petition to be debated in Parliament after receiving more than 4m signatures Independent. Could get to this number and more by people employed by the City or broadly dependent on it. But will help May in backing out. However, I still believe that ignoring the vote will come at a much higher cost to the Tories than the party understands. And a second referendum risks reconfirmation, since the EU is not going to offer any sweetners, unlike other past do-overs. What happens then?

What can you even say about this? I hope Corbyn’s people have good lawyers. pic.twitter.com/hSomFLjUWE @ronanburtenshaw (Richard Smith)

The Media Against Jeremy Corbyn Jacobin

Back in the Spotlight: The Central Banker Who Is ‘Running’ Britain Wall Street Journal

David Cameron: I leave Britain a ‘stronger country with a thriving economy and more chances to get on’ Telegraph. More Tory delusion syndrome. It’s not that Cameron said it. It’s that a lot of people will believe it.

The Promise of Regrexit George Soros, Project Syndicate. Soros acting as a face of the “roll back Brexit” position is not a plus in selling it. He also pushes for having the EU agree on “exceptional measures” to improve the Union, including “the EU should put its excellent and largely untapped credit to use.” Over Germany’s dead body.

Is Kerry Right? Are Freemen of Syria and Army of Islam Radical Terrorists? Juan Cole

9th Circuit: It’s a federal crime to visit a website after being told not to visit it Washington Post

Chin up Carl Beijer. Martha r: “From 6/15 but immediately relevant.”

Here’s what Bernie Sanders’s Hillary Clinton endorsement is really about Washington Post. Lambert: “‘Another such endorsement and we are undone.’ :-)” Only problem with this theory is that the Clinton camp will now take the word “endorsement” and write their own story about it.

Should the Democratic Party Be Added to the Endangered-Species List? William Greider, Nation

Clinton vetting retired Adm. James Stavridis for VP Politico. This is a very recent addition, and I don’t see it as helping Clinton in her vital electoral college calculus. This looks more like another headfake. Warren was to mess with Sanders voters, this may be to scare Trump into picking former General Flynn, who is less helpful to Trump in getting votes than other candidates rumored to be higher on his short list.

Justice Ginsburg on Trump: ‘He is a faker,’ should share tax returns CNN. Appalling to see a SC Justice meddle in a Presidential election. She’s reduced herself to the level of Scalia. As Lambert put it, “The sucking vortex of Clinton need tarnishes another reputation.”.

NYT Lets $27 Million Man Brag About What He’s Doing for Income Inequality FAIR (Judy B). That $27 million figure is a great understatement. Bloomberg puts his net worth as $1.1 billion.

The Lack of High-Quality Early-Education Programs Disadvantages America’s Children Atlantic (furzy). Hate “disadvantage” as a verb. And research on Head Start shows the benefits of early education persist only if the effort is maintained in later schooling.

Americans’ appetite for stuff slowing down Business Insider (furzy). For the old, not having enough on which to retire, and for the young, not having job security and/or not being able to buy a house will do that.

Apparently, the bears ARE coming! n my neck of the woods (about 30 miles north of Baltimore), which is generally fairly rural (we’re on 6 acres, about half of which is wooded, and which is surrounded by several hundred acres of woods and corn/soybean fields), we have been seeing a fair number of bears. My son-in-law captured a photo of one on the motion-activated camera he positions in our woods so he can track the deer activity (he hunts during the season), and this guy apparently ran across the road and into a field just west of Interstate 83 at Mt. Carmel Road. In a local Facebook group I belong to, people have reported encountering them on some of the local hiking trails, and another group member went into his back yard to right a bird feeder that had come down and startled a bear into shimmying up a tree. 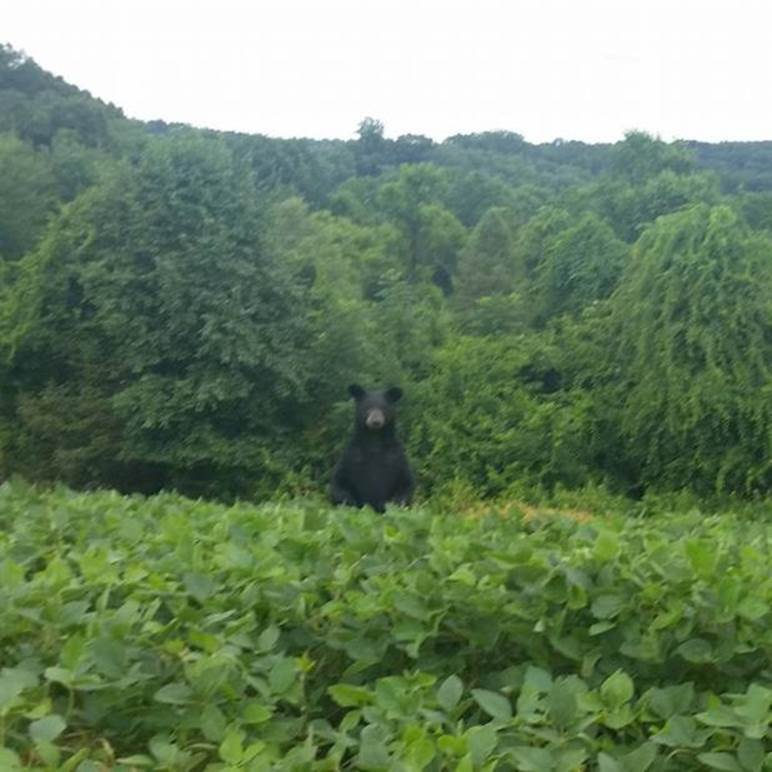