Lambert and I are going to focus Links more tightly on finance, economics, and political news than we have in recent weeks. This is not a general news site. By addressing too many topics, we are diluting our focus on our beats. And quite frankly, the quality of comments has also suffered as a result of incorporating too many stories that are well covered in the MSM. So please refrain from “Why did you not cover X?” The general answer is that we are not omniscient and we also have limited resources, and we are therefore not an answer to a wire service. But the specific answer may be, “Because we chose not to”. Please do not ask us to be something that we’ve never said we are or aspired to be.

Sturgeon: I can block UK exit from Europe Telegraph. So this is how the Tories plan to get out of Brexit: make it the Scots’ fault and appeal to the importance of preserving the UK.

EU Said to Study Nuclear Option to Force May’s Hand Over Brexit Bloomberg. Notice that this article appeared shortly after the May devolution ploy (see above). The EU is saber-rattling that the UK can’t keep creating pretexts for delay. While as the article signals, the EU is not likely to go this far, have no doubt that the Eurocrats are looking for other ways to limit foot-dragging.

UK offered Brexit free trade deal with Australia BBC. This article is more optimistic than what the EU treaties say: the UK is not even allowed to negotiate a trade deal until it has left the EU. Not sure how that could be enforced, but in practice, it would seem to mean that all the UK could do is have preliminary talks, and those don’t get you very far. And that’s before you get to practical issues, like the UK has hollowed out its Foreign Office and has no one to negotiate these pacts…which means it will have to hire mercenaries who don’t necessarily have the right expertise.

Jeremy Corbyn’s supporters are so dangerous they took over the Labour Party before they were even born Independent. Chris G: “Huge number of comments mostly from very irritated and articulate non-Trot Corbynites. The only anti-Corbyn comments are 100% content-free.” He also provided archival evidence that she had decades of experience vote-rigging!

Europe awaits last-ditch effort to save its milk farms Politico

All the East is Moving First Things (resilc)

Turkey. Note that my e-mailed European edition of Politico had as one of its top headings, “Erdogan’s Reichstag Fire”

Turkey coup attempt: World leaders warn President Erdogan not to use uprising as excuse for crackdown as more than 6,000 arrested Telegraph (furzy)

What Comes Next After Raqqa and Mosul? Defense One (resilc)

Theresa May: Britain must renew Trident because ​nuclear threat has increased Telegraph

In The Future, We’ll Stop Truck Attacks With the Push Of a Button Defense One. Resilc: “Never ending apps and techno gizmos for sale to DoD and guys in sandals will circumvent.”

Why there was nothing Buffoonish about Mike Pence’s Dinner at Chili’s Helaine Olen, Slate

Trump’s Ghostwriter Tells All New Yorker. This is based on intense observation in 1985. I’ve known a lot of people that long. Most don’t change but some do. So in isolation, this is not dispositive. Also I can see another interpretation for Trump being uncooperative with Schwartz: Trump had an idea of what he wanted in the book, his childhood was not part of it, and he had given Schwartz a lucrative enough deal that his job was to deliver what Trump wanted, which he apparently did. So this may not be lack of attention as opposed to Trump getting passive aggressive with someone he knew it would not behoove him to order around. Put it another way: Schwartz’s reading would be more persuasive if we’d heard other accounts of Trump being unable to concentrate on things that were important. BTW the charge that Trump lies casually is in a completely different category, since he’s done that repeatedly and often pretty stupidly too.

Introducing the real Donald Trump: A careful plotter and media master who is far more intelligent than he seems Telegraph. A rebranding exercise! Will it work?

Manafort Confirms Christie Was ‘Livid’ He Wasn’t Picked To Be Trump’s VP Weekly Standard (furzy). Manafort is also being uncharacteristically visible (he was quoted IIRCC in the WaPo last week). Another symptom of not having enough surrogates.

Toy Models by and via @kocherlakota009

This is What’s Cannibalizing the US Economy Wolf Richter

Antidote du jour. A wild-long tailed macaque monkey has adopted an abandoned kitten at Ubud’s Monkey Forest in Bali @planetpics. Your humble blogger has been to the Monkey Forest! Dunno how a monkey can make sure that cat gets fed, though…. 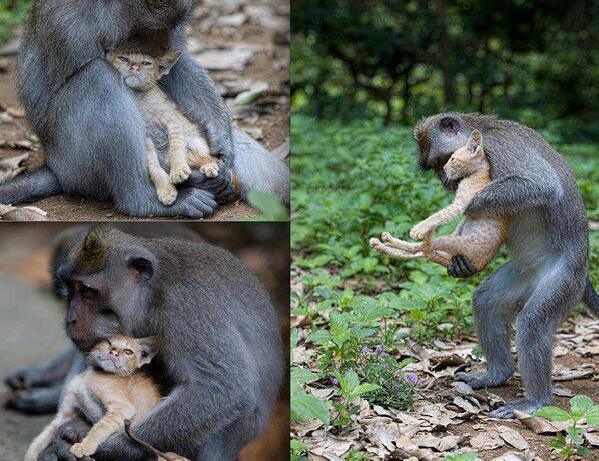