Theresa May warned plans to curb EU migration is likely to be opposed by Eastern European nations Telegraph. Notice change in headline – the one I used is the original.

Ford considers closing factories and raising prices in Europe in wake of Brexit Guardian. As we told you…

Domestic supply chains matter too. Relatively few businesses export, but many more supply those that do. About 24 per cent of the value added created in the UK economy in 2011 was ultimately consumed abroad. Just 7 per cent of businesses in the country export services, and 5 per cent export goods, but much higher proportions are exposed to their ability to trade. The data to explore the specific chain links do not exist in Britain, but recent research on Belgian data show that while only 7 per cent of businesses in that very open economy (33 per cent of value added is consumed abroad) export directly, another 38 per cent are one to three links away from them in the supply chain

IMF admits disastrous love affair with the euro, apologises for the immolation of Greece Ambrose Evans-Pritchard, Telegraph. A must read.

Concerns over political influence at the IMF Financial Times

Dangerous Propaganda: Network Close To NATO Military Leader Fueled Ukraine Conflict Der Spiegel (Fabian). A must read. Consistent with what we argued then, that the claims of Russian troop movements and other support were based on dubious evidence and looked to be exaggerated:

The emails document for the first time the questionable sources from whom Breedlove was getting his information. He had exaggerated Russian activities in eastern Ukraine with the overt goal of delivering weapons to Kiev.

PUGACHEV’S PUGS – LIONEL BARBER, NEIL BUCKLEY, AND CATHERINE BELTON EXPOSED BY SWISS PROSECUTOR IN COVERUP OF MONEY-LAUNDERING BY FRENCH, SWISS, ISRAELI AND US BANKS John Helmer. Important. Helmer does himself a huge disservice with this insider-y headline. It’s about how the FT shamelessly defends a Russian oligarch who has been found guilty by 11 British judges, including a High Court (appeals) judge and is being pursued by Swiss prosecutors for money laundering. In other words, it’s a window into media politics. BTW, the pink paper is unhappy about Helmer’s story, see here.

Night of the Hollow Men: Notes From the Democratic Convention Counterpunch (Li). OMG, you must read this! Simultaneously funny and brutal.

Hillary Clinton’s Nomination Met With Joy From Many Women at DNC, But Disenchantment From Others Intercept (resilc)

‘No more war’ chants interrupt general The Hill. The warmongering on the last night of the convention took place via a Clinton surrogate.

Why will she turn on those people when it’s so easy to turn on us? Vox

Will Preemptive Accusations Against Russia Cover Up Voting Fraud? Moon of Alabama (margarita)

Sorry Hillary, Friday’s headlines will be about Trump CNBC (furzy). Some good insights further down.

An oil price dilemma: The world may just need less fossil fuels to get by Globe and Mail

Stiglitz Calls Apple’s Profit Reporting in Ireland ‘a Fraud’ Bloomberg (Dan K). Economists should never do tax. Repeats the bogus idea that companies like Apple that use Irish or other “offshore” entities to lower their taxes are keeping money out of the US. The tax treatment has nada to do with the economics. In the case of Apple, the Irish entity has accounts with American TBTF banks and the money is managed out of Nevada as an internal hedge fund. See here for the gory details (and this is simplified from Sheppard’s version for tax professionals in Tax Notes). So Stiglitz is legitimating their propaganda when he repeats the “cash overseas” meme.

Atlanta Fed Drops Second Quarter GDP Forecast WSJ MoneyBeat. We thought the cheerleading about the state of the economy was overdone.

This 3-some belongs to a young couple in Denver. They love black cats, so rescued an 8 week old black kitten, which now appears to be turning gray, apparently in effort to match its 2 new best friends. The Great Dane absolutely loves the kitten and when attacked by it which is quite frequently, picks it up, licks it, and cuddles with it. 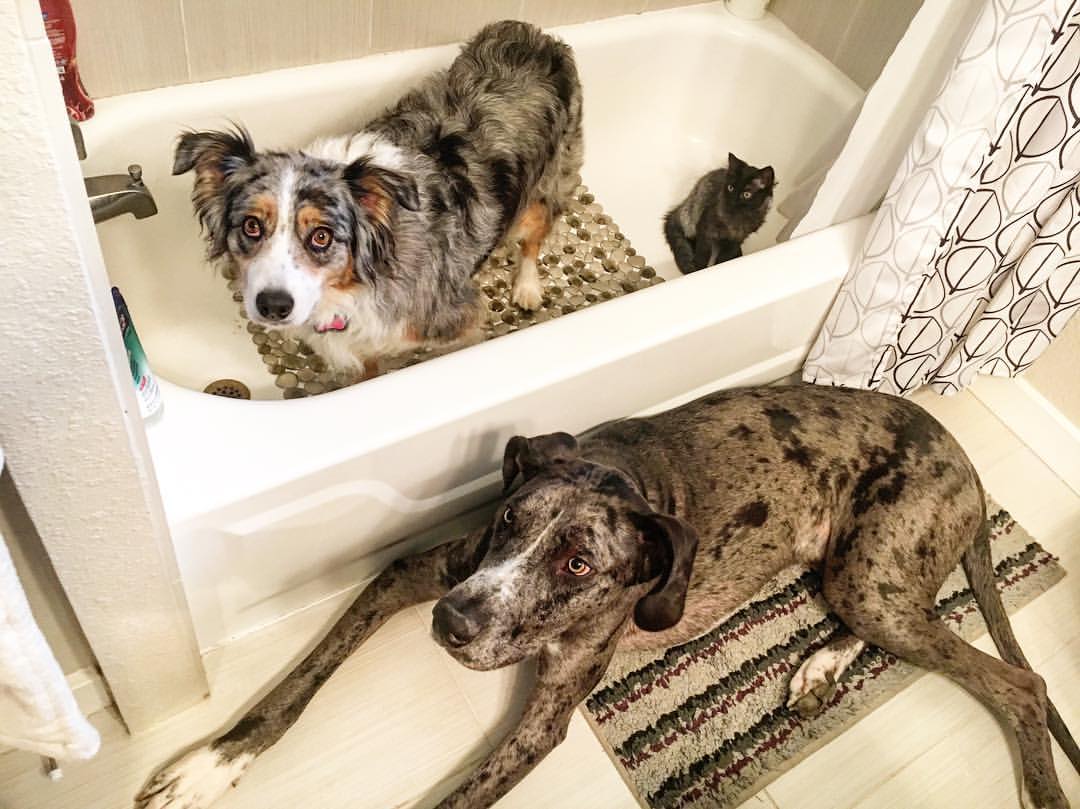