Yves here. This is a very important post, and sadly I’m not providing it with the introduction and commentary it warrants because I am scrambling to get organized to get out of town.

By Daniela Gabor is associate professor in economics at the University of the West of England, Bristol. Originally published at the Institute for New Economic Thinking website

Since the 1980s, central banks have been increasingly freed from fiscal dominance, the obligation to monetize government debt. The new regime of monetary dominance celebrated the (price) stability benefits of insulating scientific monetary policy from poorly theorized, highly politicized fiscal policy. Yet the growing dominance of the ‘monetary science, fiscal alchemy’ view in both academia and policy circles played a critical role in the rapid rise of shadow banking. The untold story of shadow banking is the story of (failed) attempts to separate monetary from fiscal policy, and of the bordeland that connects them, mapped onto the repo market.

While the state withdrew from economic life, privatizing state-owned enterprises or state banks, and putting macroeconomic governance in the hands of independent central banks, its role in financial life grew bigger. Sovereign debt evolved into the cornerstone of modern financial systems, used as benchmark for pricing private assets, for hedging and as base asset for credit creation via shadow banking. The state’s role as debt issuer, passive and systemic at once, has been reliant, beyond the arithmetic of budget deficits, on the intricate workings of the repo trinity. 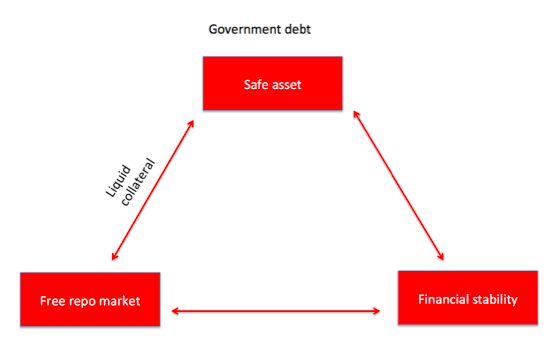 The repo-government bond market nexus took shape in the 1980s. In the US, securities dealers preferred repos to secured lending against collateral because market convention treated repos as outright sales and repurchases of collateral that allowed dealers to re-use collateral for a wide range of activities (short-selling, hedging, selling to a third party). When bankruptcy courts decided that repos would be subjected to automatic stay rules, Paul Volcker, then the Federal Reserve chairperson, successfully lobbied Congress to exempt repos with US Treasuries (UST) and agency securities collateral. Then, Salomon Brothers short-squeezed the UST market in 1991 by becoming the only repo supplier of a two-year note. This allowed Salomon to fund securities through repo transactions at exceptionally low rates. The ensuing public enquiry into the Salomon scandal showed little appetite for regulating repos. Rather, the Fed and the Treasury introduced new practices to fix gaps in repo plumbing, celebrating repos as innovative, liquidity enhancing instruments that would support the state in the post fiscal-dominance era.

The UST blueprint diffused rapidly to Europe. Pressured to adjust to a world of independent central banks, market-based financing and global competition for liquidity, European states embarked on a project of creating modern government bond markets, with modernity understood to mean the structural features of the US government bond market: regular auctions, market-making based on primary dealers and a liberalised repo market.

Central banks were at first divided on the benefits of opening up repo markets. While Banque de France followed the US Fed in assuming a catalyst role for the repo-sovereign bond market nexus, Bundesbank and Bank of England worried that deregulated repo markets would unleash structural changes in finance that could undermine the conduct of monetary policy and financial stability. In the architecture of the US government bond market, the Bundesbank saw the conditions nurturing short-term, fragile finance. Seeking to keep banks captive on the uncollateralized segment of interbank markets, Bundesbank imposed reserve requirements on repo liabilities. In parallel, as government’s fiscal agent, Bundesbank followed a conservative strategy, with irregular auctions, issuance concentrated at long maturities and repo rules that increased the costs of funding bunds via repos. German banks responded by moving (bund) repo activities to London and warned that France’s open repo strategy would make it into the benchmark sovereign issuer for the Euroarea. For similar reasons, the Bank of England exercised strict control over the repo gilt market for 10 years after the 1986 Big Bang liberalisation of financial markets. Under intense pressure from the financial industry and Ministries of Finance, the two central banks liberalized repo markets by 1997.

As the fragilities of the new, collateral-intensive world became apparent in the 1998 Russian crisis, central banks working together in the Committee on the Global Financial System subscribed to the policy goals of the repo trinity. The CGFS argued that financial stability in market-based finance required global safe assets, issued in government bond markets, in turn ‘lubricated’ by free repo markets with carefully designed (but not regulated) risk management regimes.

In pursuing the objectives of the repo trinity, central banks helped consolidate the critical role that sovereign bonds play in modern financial markets. Throughout the 2000s, the shortage of US government bonds saw the trinity extended to include securitization markets, while the Euro project galvanized consensus for a European repo trinity, whereby central banks encouraged the European banks dominating the repo market to treat all Euro sovereign debt as high-quality collateral. 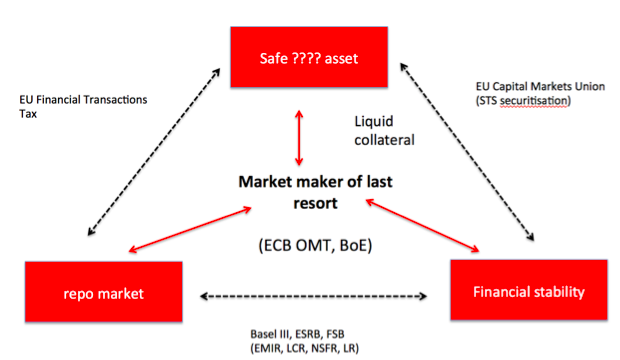 The quiet revolution in crisis central banking that involves direct support for core markets may appear like, but does not entail a return to, fiscal dominance. Rather, it creates financial dominance, defined as asymmetric support for falling asset prices. While financial dominance should be addressed by direct regulatory interventions, the quest for biting repo rules has so far proved illusive. The precise impact of Basel III liquidity and leverage rules is yet to be determined, whereas the failed attempts to include repos in the European Financial Transactions Tax and the FSB’s watered-down repo proposals suggest that (countercyclical) collateral rules are only possible once states design alternative models of organizing their sovereign debt markets. Paradoxically, new initiatives in Europe suggest that a return to the repo trinity is rather more likely: the Capital Market Union plans to create Simple, Transparent and Standardized (STS) securitisation again illustrate the catalyst role that central banks choose to play in market-driven solutions to safe asset shortages.