Yves here. Um, this presupposes that Clinton wants votes of Millennials…beyond the graduates of elite schools and children of the top 5% whose parents have paved the way for them securing upper middle class jobs. 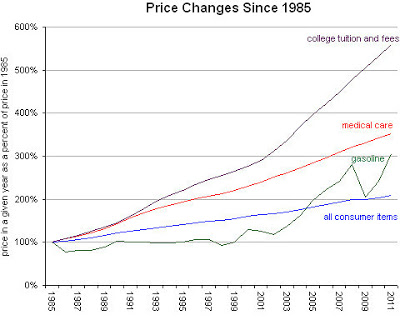 The cost of college compared to other consumer costs, 1985–2011 (source; click to enlarge)

“I feel like a lot of the stuff Hillary does, you can see when she is trying to, like, earn the youth vote, and it just doesn’t work,” Nick Chanko, 20, who goes to school in Montreal but votes in New York, told the New York Times. [source]

It’s not news that Hillary Clinton is struggling, struggling mightily in fact, to attract millennials in sufficient numbers to put the election out of reach:

The youth vote was one of the pillars of the Obama coalition. But thus far it’s proven perhaps the most difficult one for Clinton to rebuild. Polls show the nominee failing to earn the confidence of young voters—only 33 percent of those between ages 18-29 told Gallup this month that they approved of her—and running far behind where she would hope to be against her Republican opponent. The polls also show Clinton currently winning under half their votes, while Obama got over three-fifths of that demographic in both of his campaigns.

Many people in the Dem establishment are asking the question: How can we get millennials to vote for us?

There are a lot of plans that don’t work and won’t work, like appearing on an impossibly awkward edition of Between Two Ferns (awkward for both her and the host; Clinton actually had the best ad-lib), or rolling out Bernie Sanders at colleges. Regarding Sanders, Bernie stood for what Bernie stood for, and people, not just millennials, loved him for it. Will they love Clinton if the solution is Bernie Sanders now saying, “Hillary Clinton is a strong progressive too”?

Millennials won’t be swayed if Sanders says it, true or not. In this transaction, it has to start with the candidate. Clinton has to make it true. In other words, no matter what changes the DNC makes to, say, its super-delegate rules, or (god forbid they should even consider it) the way they go about raising money, if Hillary Clinton wants to attract Sanders supporters, the move must be hers to make.

The good news is, there is a plan that will work. In this plan, Hillary Clinton gives the following speech about four simple issues. I picked these four. She could have picked others. But either way If I heard as speech like this, I would find it very convincing.

Do you agree? Read on.

How would you respond if Hillary Clinton gave the following address?

I’m keeping this … conversation … to just four issues this evening because I don’t want to focus on too many at once. I’ll address other critical issues, like climate change and racial justice, in due time. But the ones I will focus on tonight should give everyone watching a very clear idea of where I stand — on jobs, on justice for economic criminals, and on the burden of student debt.

I know these are issues of critical importance to everyone tuning in. Please hear me out.

There is no question that our jobs are going overseas, and no question that unfair trade deals are one of the major causes. I’ve already said NAFTA didn’t work, that it was a disappointment. For the same reason, I’ve already announced that I oppose TPP as it’s currently written, and I said publicly that changes need to be made in it to protect the future of jobs in America.

I still think that. So here’s what I will do about TPP as your president:

First, if Congress passes TPP and President Obama signs it, I promise to invoke Article 30.6, called the Withdrawal clause, and immediately withdraw from the TPP.

I will then order that it be renegotiated — under the public eye, in full transparency — so that the higher standards I’ve already set for this treaty are met.

Next, if Congress does not pass TPP before the election — and I strongly urge them not to — I will start renegotiations as soon as I take office; again, in full view of the public.

Finally, whether I’m the president-elect or not after November 8, I promise to vigorously lobby Congress members not to pass TPP as written if it comes up in the lame duck session.

You can watch me do it.

From the TPP Agreement text:

1. Any Party may withdraw from this Agreement by providing written notice of withdrawal to the Depositary. A withdrawing Party shall simultaneously notify the other Parties of its withdrawal through the overall contact points designated under Article 27.5 (Contact Points).

2. A withdrawal shall take effect six months after a Party provides written notice to the Depositary under paragraph 1, unless the Parties agree on a different period. If a Party withdraws, this Agreement shall remain in force for the remaining Parties.

What I said I would do about TPP, I will do about NAFTA as well. We’re all disappointed with the result. As your president I will act on that disappointment and force it to be renegotiated, as I promised to do in 2008, by threatening to use Article 2205, the Withdrawal clause, in order to start immediate renegotiations.

From the NAFTA Agreement text:

A Party may withdraw from this Agreement six months after it provides written notice of withdrawal to the other Parties. If a Party withdraws, the Agreement shall remain in force for the remaining Parties.

Next let’s look at justice, for now just one aspect — evenhanded criminal justice.

I know that many people are frustrated with what has seemed to them my overly close relationship with Wall Street. I’m here now to prove those people wrong.

I also know that may people think that much of what has been going on in the run-up to the 2008 crash and afterwards is fraudulent, in many cases, fraudulent on its face.

Many Wall Street firms and other major banks have paid heavy fines for their actions — for example, the HSBC money-laundering case in 2012; the Standard Chartered Iran sanctions case, also in 2012; the Barclays case in 2010; and the Credit Suisse case in 2009.

But fines are not enough. If similar actions were performed by the small business women and men of middle America, they’d be facing criminal charges and would be forced to defend their their in court, as is their right, and would face jail if found guilty.

So I promise to you, the days of Wall Street executives — or indeed, executives of any powerful firm — not having to appear in criminal court for actions that would put any ordinary American citizen in court … those days are over.

I want to close with this, how I will address the unconscionable magnitude and weight of student debt.

Both Senator Sanders and I agree that the burden of student debt in this country is beyond unbearable. Student loan availability drives the cost of tuition in this country, which has sextupledsince the 1980s. Sextupled!

Student debt also drives the rate of despair among our young people, who leave college with what feels like a mortgage, but without the house, and often, without a job in the career they prepared for. And they see no hope in sight, not from their president, nor from their Congress.

This is unacceptable. As president, I will not only address the whole issue of student loans and college tuition — as I said I would do in my platform — but I will do one more thing.

This may not endear me to the bankers some say I’m too close to, but it must to be done. We must free this generation of young people … and I mean to do it.

To the greatest extent I can, using the power of the executive branch, I will announce and implement a policy of debt forgiveness — a student loan jubilee. And I will challenge every lending institution in this country to follow my example.

This will happen within the first 90 days of my administration. You can watch if you like.

Me again. Four simple issues, four of many I could have chosen, all of great importance to prospective millennial voters, especially given their popularity during the Sanders campaign. And note — no hedging, no loopholes, no equivocation. Language like this would be a direct challenge to the voters; they will either believe her or dismiss it completely. Language like this would leave no middle ground.

Don’t you think, if millennial voters heard this stark, plain speech, they’d give her candidacy a second chance, their serious consideration? I do.

Donna Brazile and the folks at the DNC, you might give this approach some of your own serious consideration. It’s so direct and clear, it’s almost guaranteed to work. It’s certainly better than what’s been going on lately. And no one wants The Donald to win this race.