Yves here. Germany seems determined to test the Eurozone experiment to destruction. As we’ve long said, it insists on contradictory aims: running large trade surpluses, not being willing to finance them, and not permitting high levels of fiscal spending to serve as another mechanism to provide for transfers to “deficit” countries. By contrast, people in New York and California don’t even think much about the fact that they are getting less out of the Federal government than they pay in taxes and are effectively supporting consumption in places like Mississippi.

The October 2016 expert survey of the Centre for Macroeconomics (CFM) and CEPR invited views from a panel of macroeconomists based across Europe on Germany’s trade surplus, its impact on the Eurozone economy, and the appropriate response of German fiscal policy. More than two-thirds of the respondents agree with the proposition that German current account surpluses are a threat to the Eurozone economy. A slightly smaller majority believe that the German government ought to increase public investment in response to the surpluses.

Germany posted a record-high current account surplus of 8.5% of GDP in 2015; indeed, the German surplus has overtaken China’s surplus as the largest in the world. Germany’s current account was slightly in deficit when the euro was created in the late 1990s, it steadily increased in the early 2000s and has continued to rise since the Global Crisis of 2008. Since 2010, the increase in the current account has been accompanied by fiscal surpluses, with the German government moving from a deficit of 4% of GDP in 2010 to a surplus of 1.2% in the first half of 2016.

Through the prism of the trade balance, the current account surplus can be viewed as a symptom of Germany’s economic success. German exports increased from 30% of GDP in 2000 to 47% in 2015. But with imports at merely 39% of GDP, this implies that Germany is providing capital to the rest of the world at a very high rate. Indeed, German savings have increased from roughly 20% to nearly 30% of GDP, while domestic investment has remained roughly constant at around 20% of GDP.

One view, harking back to Keynes, is that such large capital flows could be very destabilising, particularly within a system of fixed exchange rates (or a currency union). The argument is that while countries with current account deficits may come under severe pressure to adjust, countries with surpluses face no corresponding pressures.1 Keynes’s solution – which was part of the inspiration for the creation of the IMF – was that occasional exchange rate adjustments might be necessary in order to rebalance international credit flows.

The IMF (2016) and the European Commission (2016) have both warned of the risks of Germany’s current account surpluses; and both have urged Germany to take actions to reduce its external surplus, for example, by increasing public investment.

While the nature of the Eurozone makes exchange rate adjustments impossible, the IMF reckons that Germany’s real exchange rate is now 15-20% undervalued (IMF 2016, p. 7). The US Treasury has gone so far as to add Germany to its ‘monitoring list’ of countries engaged in ‘unfair currency practices’, even though Germany does not have a national currency (US Treasury 2016).

In contrast, Jens Weidmann, President of the Bundesbank, has argued that German net capital outflows are primarily structural, resulting from Germany’s high level of economic development and ageing population. He also argues that the Eurozone’s common monetary policy allowed slower current account adjustments, thus mitigating the Eurozone crisis (Weidmann 2014). The German economics ministry claims that Germany’s surplus is “a sign of the competitiveness of the German economy and global demand for quality products from Germany”.3

The first question in the October 2016 expert survey of the Centre for Macroeconomics (CFM) and CEPR addressed the question of whether large German surpluses are reasons for concern.4 To focus the question, we asked the experts about its consequences for the Eurozone, but they were free to address wider implications in their comments.

Q1: Do you agree that German current account surpluses are a threat to the Eurozone economy? 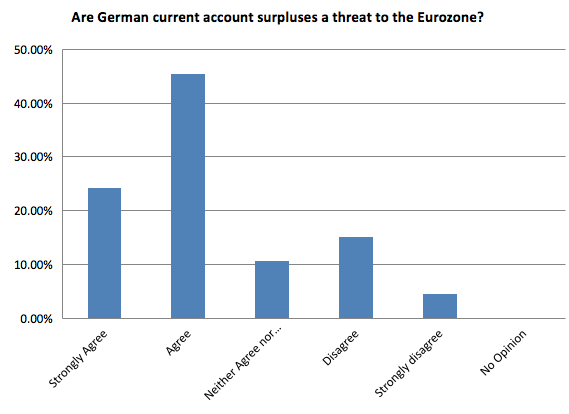 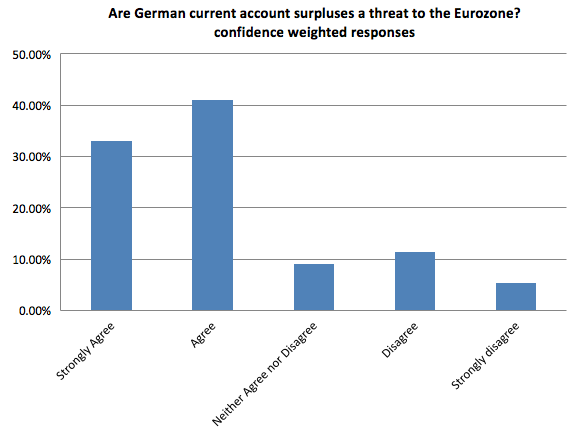 Sixty-seven panel members answered this question and a large majority (69%) agree or strongly agree with the proposition. A number of panel members point to evidence of the risks of current account balances. Ricardo Reis (LSE), for example, says that “current account imbalances during 2000-08 played a central role in the Eurozone crisis of 2010-12” (see Obstfeld 2012 and Lane 2013).

Other panel members suggest that German current account surpluses are a symptom of the common European currency. Michael Wickens (Cardiff Business School and University of York) warns that “the main underlying problem is the single currency. Germany’s current account surplus reflects its competitiveness, but due to the single currency, it can’t appreciate against the Eurozone countries with chronic current account deficits. It is all reminiscent of the failures of the Bretton Woods system, which of course eventually collapsed due to currencies becoming misaligned.”

Simon Wren-Lewis (Oxford) agrees that “the surplus represents an undervalued real exchange rate in Germany, which requires more inflation in Germany relative to the rest of the Eurozone”.

Wouter Den Haan (LSE) suggests that the problem is exacerbated by conditions in the Eurozone periphery: “There is a very good chance that the Eurozone is in a bad equilibrium in which consumers do not spend because they are concerned about future earnings and firms are hesitant to hire workers and raise wages because they are concerned about demand for their products. Even if this is not behind the high savings rate in Germany, it does make this increase in precautionary savings more problematic in the periphery.”

A number of panel members (Charles Bean, LSE; Jonathan Portes, National Institute of Economic and Social Research) warn that Germany’s current account surplus is not uniquely a Eurozone problem, but is also large enough to contribute to the low global real interest rates.

The global dimension is also the main counter-argument of the panel members who think that the German current account is not a threat to Eurozone stability. Robert Kollman (Université Libre de Bruxelles) points out that “the German current account surpluses do not represent a threat to the Eurozone economy, because Germany trades more with the rest of the world than with the rest of the Eurozone”.

Pietro Reichlin (Università LUISS G. Carli) caveats his concern about the German current account with the view that “part of the surplus is due to exports to extra-European countries and these benefit some EU peripheral economies that are exporting intermediate inputs and parts to Germany”.

Others do not feel that there are theoretical grounds for concern about the German current account. Francesco Lippi (Università di Sassari) argues: “I do not see why the savings of my neighbour should be a problem for me. Rather, they are a potential source of financing my investment. I do not know a single reasonable model where current account surpluses are a problem.”

With exchange rate adjustment off the table within a currency union, the main policy recommendation to reduce Germany’s current account surplus has been a change in German fiscal policy. Martin Wolf points out that the current account surplus is driven primarily by an increase in the supply of savings of German households and thus reflects insufficient aggregate demand.5 He warns that Germany isn’t carrying its weight in the global economy and has failed to contribute to global aggregate demand.

The IMF has called on Germany to “focus on raising potential growth and reinforcing rebalancing, which will also support the fragile recovery in the euro area”, including the use of fiscal resources to “boost high quality public investment”.

The European Commission concurs that “weak investment has contributed to the high and persistent current account surplus and poses risks for the future growth potential of the German economy”. The Commission joins the IMF in suggesting that “there continues to be fiscal space for higher public investment, while complying with the rules of the stability and growth pact”.

In contrast, Jens Weidmann suggests that an expansionary German fiscal policy will do little to spur demand in the Eurozone periphery as the import component of Germany public spending is merely 9%. And while Willem Buiter agrees that Germany’s current account surplus is excessive, he thinks that fiscal expansion may not be consistent with German inflation stability and that the European Central Bank should finance fiscal expansions elsewhere.6

The second question in our survey asked the experts whether the current account imbalance is a reason for the German government to increase public spending. We were not asking whether public spending should increase for other reasons (say low interest rates), although current conditions may – of course – affect the answers given.

The question was explicitly conditioned on the fact that Germany is part of the Eurozone and we asked the respondents to answer from the point of view of the Eurozone. That is, when countries’ fiscal deficits are high, the Eurozone regularly demands that action is taken to reduce public spending: so does it similarly make sense for the Eurozone to ask Germany to increase public spending given its large current account surplus?

Q2: Do you agree that the German government should increase public spending given its persistently large current account surplus and given that it is part of the Eurozone? 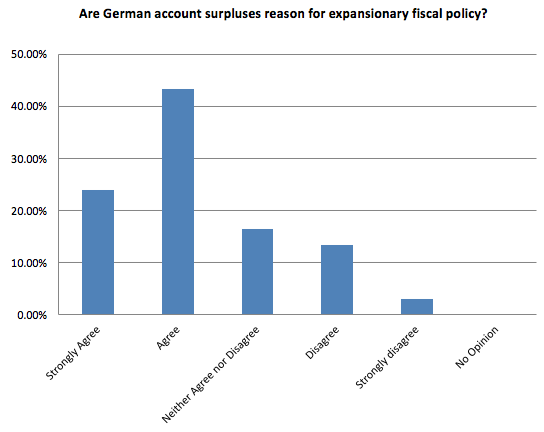 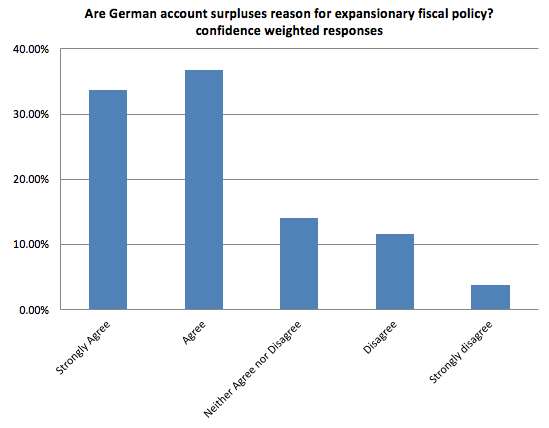 Sixty-seven panel members answered this question with a large majority (67%) agreeing or strongly agreeing that the German government ought to increase public spending in response to the current account surpluses.

Sweder van Wijnbergen (Universiteit van Amsterdam) notes that “Germany’s (public capital)/GDP ratio is HALF of the comparable ratio in the Netherlands”. In contrast, Nezih Guner thinks that public investment might be counterproductive: “Public spending on investment incentives or infrastructure, for example, can further enhance the productivity advantage of German economy and can very well make the situation worse.”

Another argument in favour of a German fiscal expansion relates to the asymmetry of fiscal rules in the Eurozone. Costas Milas (University of Liverpool) points out that “the EU Treaty talks about ‘corrective’ fiscal measures when the deficit exceeds 3% of a country’s GDP. There is no similar mechanism in case of a (relatively) big fiscal surplus”.

Ricardo Reis, on the other hand, states that “the Treaties do not put the European institutions in charge of aggregate demand management. Therefore, it makes perfect sense for there to be a pronounced asymmetry between requiring the reduction of fiscal deficits, but having nothing to say about fiscal surpluses.” But he does suggest that discretionary policy is desirable at this point in time: “It seems likely that both Germany and the rest of the Eurozone would benefit from some fiscal expansion in Germany… Given the increase in the primary surplus since 2004, there also seems to be some room to do so.”

A number of panel members support policy action, but not an increase in public spending. Francesco Giavazzi (IGIER, Università Bocconi) and Nicholas Oulton (LSE) advocate tax cuts. In addition, Jürgen von Hagen (Universität Bonn) warns that fiscal action is desirable at the federal level, but not at the state level: “Lander public finances are mostly unsustainable and an increase in spending is not called for.” Wendy Carlin (University College London) proposes increasing incentives for women to participate in the labour force.

Panel members who are opposed to German fiscal action largely point to the limited evidence that such action would reverse the current account surplus. Gernot Müller (Eberhard-Karls-Universität Tübingen) points out that “evidence to date suggests that the link between fiscal policy and the current account is weak. In fact, not even the sign of how a fiscal expansion impacts the current account is clear (see Kim and Roubini’s 2008 paper on twin divergence).”

Evi Pappa (European University Institute) adds: “In my own research, I also show that fiscal consolidation, as a means to induce an internal devaluation in a two country model works, but it affects very little economic activity in the periphery. A more effective way for correcting current account imbalances is transferring resources from Germany to the periphery” (see bandiera et al. 2016).