Compared to other Western governments, the US government taxes at a very low level, about 18% of GDP…

Trump’s plan, which has huge tax cuts for business and the rich, emphasizes growth. It would inject $4-6 trillion into the economy over 10 years, mostly by means of business tax cuts. This would be supply-side economics, which you can do with your own currency. Two problems:

First, tax cuts would have to be enormous to have any macroeconomic effect on a $16-18 trillion economy. His first plan proposed even larger cuts, and the deficit hawks swooped. Think of it as the tax version of QE. But consumption has fallen, and newly subsidized businesses would still need customers in order for investing to make sense.

Second, even if enhanced growth were achieved, it would not be evenly distributed. US income taxes are progressive. Spending is not, so the system as a whole is not redistributive. And as the individual discussion shows, it would not put a lot more money in the hands of people with a high marginal propensity to consume.

By Antony Ting, Associate Professor, University of Sydney. Originally published in The Conversation

US President-elect Donald Trump made an election promise to cut the US federal corporate tax rate from the current 35% to 15%. A somewhat more modest proposal is under way in Australia. The plan outlined in the 2016-17 budget is to cut the standard company tax rate progressively over 10 years from the current 30% to 25% in 2026-27.

But there are many political challenges governments have to overcome before these reforms may become reality.

Most countries have been reducing their company tax rates over the last two decades.

The average company tax rate for OECD countries has declined from 32% in 2000 to 25% in 2015. Most of the tax cuts occurred before 2009, and rate reductions slowed down after the global financial crisis. The largest cut over that period occurred in Germany, by almost 22 percentage points (from around 52% in 2000 to the current 30%).

The UK has also been active on this front. Prime Minister Theresa May this week said she wants to cut corporation tax to the lowest among the world’s 20 largest economies.

Britain’s company tax rate was reduced from 30% in 2000 to the current 20%. The government had planned to further reduce the rate progressively to 17% by 2020. This plan is one of the measures to achieve the government’s goal of “creating the most competitive tax regime in the G20”.

Non-OECD countries are equally keen to maintain a competitive company tax rate. For example, China reformed its enterprise income tax system in 2008. A new unified rate of 25% replaced the old 33% rate for foreign investment enterprises and more than 50% rate for domestic enterprises. The government picked this rate after careful and detailed analysis of the prevailing company tax rates around the world for the purpose of enhancing the competitiveness of its tax system.

Given these downward trends, many governments are under immense pressure to keep their company tax system internationally competitive. A race to the bottom seems inevitable.

But where is the bottom? A look at the OECD data shows that many OECD member states have a company tax rate below 20%. 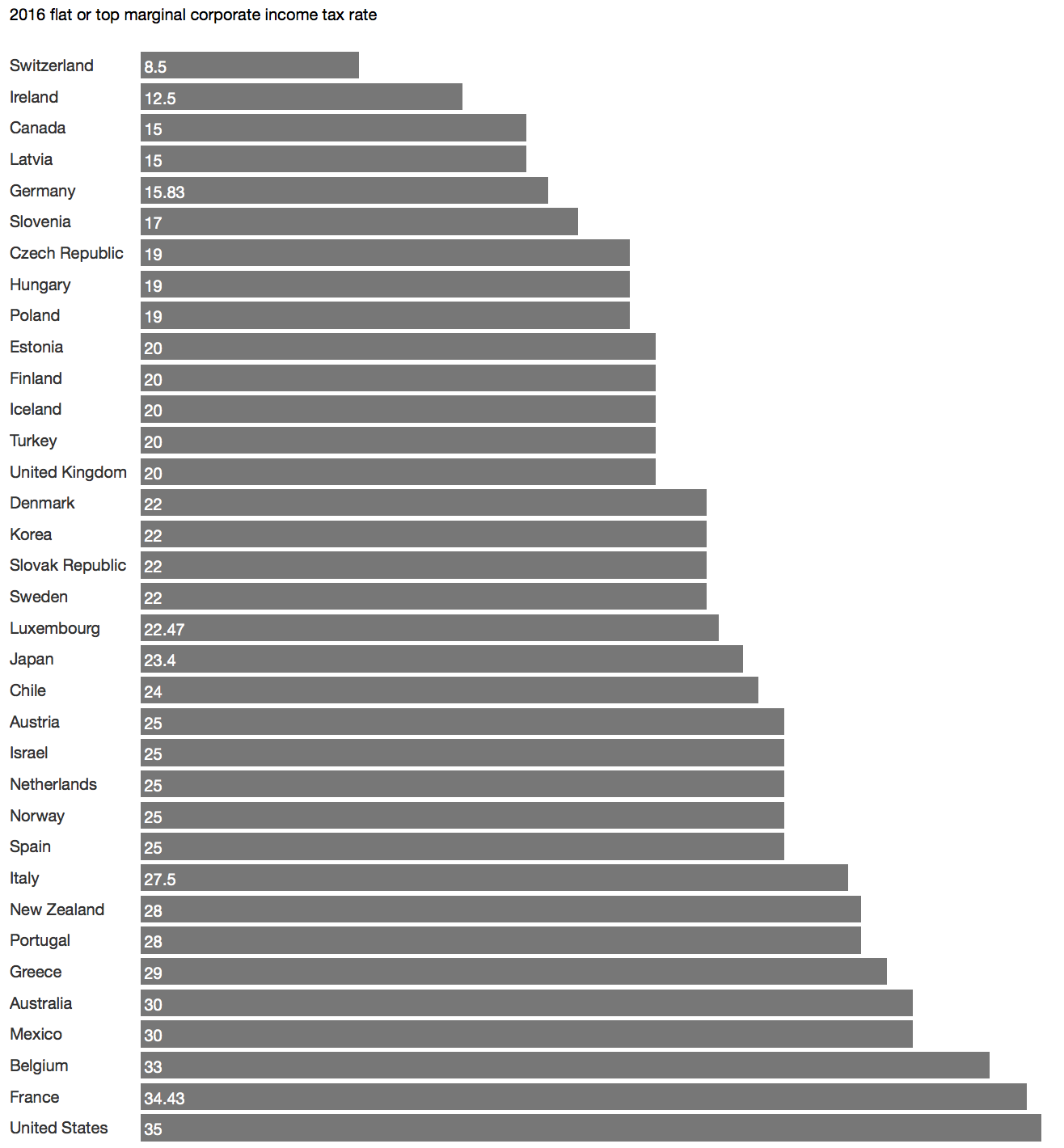 The Australian government has argued that a lower company tax rate would reduce international tax avoidance, as a reduced tax rate gap between Australia and other countries would mean less incentive to shift profits from Australia.

The tax-avoidance “success” stories of multinational enterprises such as Apple, Google and Microsoft suggest this argument is weak. The fact is that the profits these multinationals shift offshore often end up totally tax-free.

Even a company tax rate of 25% would still present significant incentive for these multinationals to employ tax-avoidance structures. A more effective approach should implement strong anti-avoidance tax law to combat this kind of aggressive tax planning.

The revenue impact of the proposed company tax cuts is substantial. In the US, corporate income tax revenue in 2015 amounted to US$344 billion, representing 11% of total federal tax revenue. Cutting the 35% corporate tax rate to 15% is estimated to result in an annual revenue loss in the region of US$150 billion.

In Australia, company tax represented 18% of the total tax revenue of A$446 billion in 2014-15. A cut in the standard company tax rate from 30% to 25% implies an estimated annual revenue loss of more than A$10 billion. Where will the money come from? This is a serious challenge for governments.

A recent OECD report on tax policy reforms begins with this statement:

“In a context of low growth, subdued investment, high unemployment and inequality, tax policy plays an important role in supporting both economic growth and greater inclusiveness.”

A proposal to cut company tax, especially without a corresponding tax cut for individuals, is particularly difficult for governments to sell in this economic environment. The general public appears increasingly reluctant to accept the traditional argument that the economic benefits businesses enjoy due to company tax cuts will eventually flow down to benefit the public at large.

The issue of alternative revenue sources to cover for a company tax cut is particularly difficult to resolve in the US. The absence of a value-added tax in that country, and the formidable political resistance to such a tax, suggests it will be very difficult for the US government to find alternative revenue sources significant enough to compensate for the revenue loss of a company tax cut.