Readers, I need a bit more time to digest, if that is the word I want, the inaugural, so check back soon and I’ll have more. I do note that there weren’t any liberal von Stauffenbergs, so apparently Trump is not a fascist after all. Good to know. –lambert

For too long, a small group in our nation’s capital has reaped the rewards of government while the people have borne the cost. Washington flourished, but the people did not share in its wealth. Politicians prospered, but the jobs left and the factories closed. The establishment protected itself, but not the citizens of our country. Their victories have not been your victories. Their triumphs have not been your triumphs. And while they celebrated in our nation’s capital, there was little to celebrate for struggling families all across our land.

For “Washington, DC” read “the Acela Corridor” plus “Silicon Valley,” even if that’s not a Republican “big gummint” trope. And:

Everyone is listening to you now. You came by the tens of millions to become part of a historic movement, the likes of which the world has never seen before.

At the center of this movement is a crucial conviction, that a nation exists to serve its citizens. Americans want great schools for their children, safe neighborhoods for their families, and good jobs for themselves. These are just and reasonable demands of righteous people and a righteous public.

But for too many of our citizens, a different reality exists: mothers and children trapped in poverty in our inner cities; rusted out factories scattered like tombstones across the landscape of our nation; an education system flush with cash, but which leaves our young and beautiful students deprived of all knowledge; and the crime and the gangs and the drugs that have stolen too many lives and robbed our country of so much unrealized potential.

(APPLAUSE) We are one nation and their pain is our pain. Their dreams are our dreams. And their success will be our success. We share one heart, one home, and one glorious destiny. The oath of office I take today is an oath of allegiance to all Americans.

This is the part that’s being labeled “bleak,” but Case-Deaton makes it realistic. But then we get the bombast of “glorious destiny.”

“Protesters block entrances to inauguration, set fires, vandalize” [Chicago Tribune]. Interesting quotes. See comment below on mobilizing vs. organizing. From my armchair at 30,000 feet, the four most impactful “movements” of the last decade or so in the United States were the capitol occupations, Occupy proper, Black Lives Matter, and #NoDAPL, the middle two in the realm of ideas, and first and fourth on policy). They share the common characteristic of taking and holding territory. (That’s what BLM did in Ferguson through continuous marching for weeks and months, since the police wouldn’t ever let them sit or stop; they had to keep walking.) Maybe I’m just getting old, but I don’t see the point of “protest” tactics. What are they but virtue signaling?

“Anti-Trump protests erupt across the country” [The Hill]. Atlanta, Austin, Denver, Los Angeles, Oakland, Philadelphia, Portland, San Francisco, and San Jose. Several are using the tactic of disrupting public transportation, which is fine, I suppose, unless you have hostages to fortune who require your paycheck.

“Moments after taking the oath, President Trump transforms White House website” [WaPo]. “Strikingly absent from the six issues the website highlights — and from his speech Friday — was anything on repealing or replacing Obamacare.” Here’s the website: 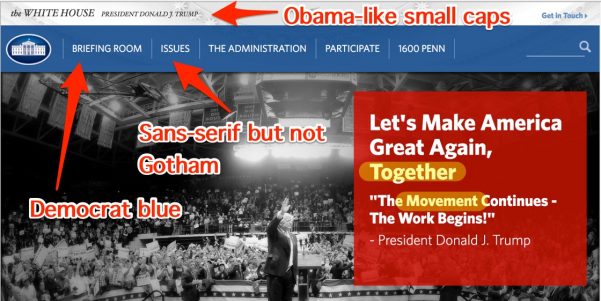 Looks to me like the Trump web-designer took the most finicky, twee aspects of Obama’s brand strategy and copied them without really knowing what they were doing.

“Hillary: The Face of the Vanquished” [Politico]. Click through to the (Pulitzer-quality) photo, and take a look at Bill. Yikes!

“Throw Sand in the Gears of Everything” [Frances Fox Piven, The Nation]. In essence, on the distinction between mobilizing (easy) and organizing (hard). From my armchair at 30,000 feet, I’m quite mistrustful of the notion of “resistance,” because it’s fundamentally reactionary and defensive. I think the lesson of the Sanders campaign is that going on offense is both necessary and possible. And at the risk of repeating myself: The only thing that matters is providing concrete material benefits to working people. Peace, land, bread, and so forth. Even if you’re a “Save capitalism!” moderate! Most everything else is venting at best. It’s ridiculous, for example, to have a “Resistance Manual” that shillie-shallies on Medicare for All.

“The DeVos Democrats” [Jacobin]. Very much including the Black Misleadership Class.

“The Obamas were a master class in dignity and civility. Did we learn what they taught?” [WaPo].

There are no official statistics today.

“The findings in the journal Science show that ocean surface temperatures during the Earth’s last warm period, some 125,000 years ago, were remarkably similar to those today” [Japan Times]. “But what concerns scientists is that sea level back then was 20 to 30 feet (6 to 9 meters) above what it is today.” First slowly, then all at once…

“How much would it cost to geoengineer thicker Arctic sea ice?” [Ars Technica]. Less than the Iraq War! So we’re good…

Is the KGB replacing the FBI/CIA? https://t.co/MvDBEXrcwF

No, it isn’t, since the KGB died with the Soviet Union in 1991. But — and I can’t help but think this is generationally linked — KGB branding works. It’s a shame to see Black Lives Matter paroting Democrat talking points (and since when were budget cuts treasonous, anyhow?)

With this background in mind, the principal goal of this manuscript is to provide a conceptual and methodological analysis of the MRP, with a particular focus on the extent to which scientific evidence supports its key presuppositions. In doing so, I draw on broader literatures in psychometrics, as well as philosophy of science, social cognition, cognitive-behavioral therapy, behavior genetics, and personality, health, and industrial-organizational psychology, that bear on the validity of the MRP [Microaggression Research Program]. I contend that these pertinent, well-developed bodies of knowledge have received short shrift in previous discussions of the microaggression concept. As a consequence, the MRP has largely neglected the critical scientific principle of connectivity: Novel research programs must accord—connect—with well-established scientific principles (Stanovich, 2012). If the findings of a research program run counter to these principles, the onus of proof falls squarely on its proponents to demonstrate that these principles are erroneous or do not apply in the case of their research program.

For $8,000, this startup will fill your veins with the blood of young people https://t.co/GpkPV0RT9e pic.twitter.com/JgBNiegs8b

Holy shit this is wild, median America&#39;s wealth is 1/4 of median Australia&#39;s pic.twitter.com/aldZjuBKnH

“A Plea for Responsible and Contextualized Reporting on User Security” [Technosociology]. On Guardian reporting of a (putative) WhatsApp security problem.

” In October, Green’s Dictionary of Slang became available as a free website, giving you access to an even more updated version of the dictionary. Collectively, the website lets you trace the development of slang over the past 500 years” [Open Culture]. Cool! Random word: Wiffmagig, [mid-19C] a trifler, an insignificant or contemptible fellow. 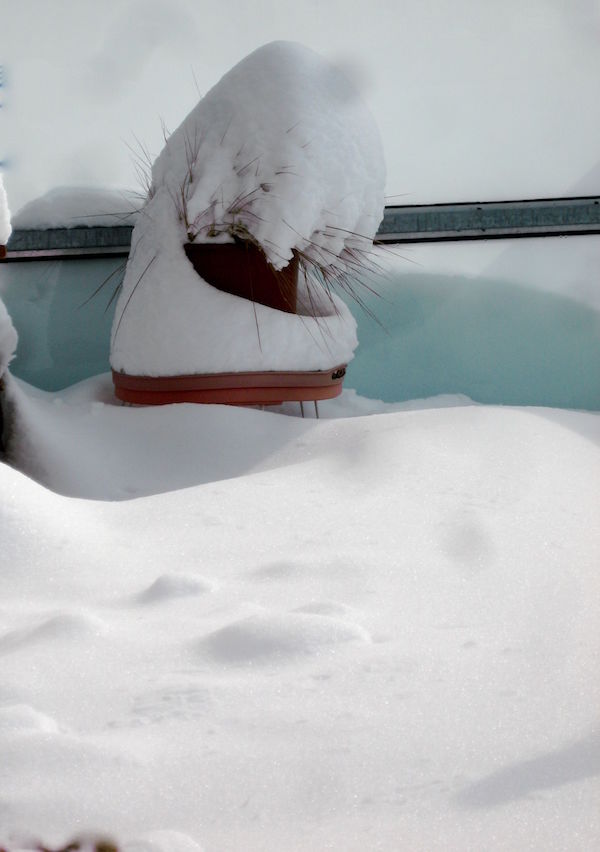 There you have it, finally, a ‘plant with snow’ coming from German right in time.

Actually, it’s more snow than plant sitting on my balcony, a ‘blue
grass’ we call it in German but it is hidden under the snow, anyway, I like it for its distinctive profile which reminds me of this profile; Grassus Trumpus, which makes it almost an antidote. Or something. Have an inspiring inauguration day…