It has been astonishing to see the UK press tout yet another Brexit delusion: that the UK will show up those nasty Europeans by cutting an awesome trade deal with their new best buddy, Donald Trump.

We’ve discussed long-form how the UK is in hot water with its Brexit plans regardless. The EU is hanging tough on not starting any sort of Brexit talks until Britain pulls the Article 50 trigger. The EU treaty stipulates that departure happens in 24 months irrespective of whether an exodus has been tidied up . Pretty much everyone agrees that a Brexit by default rather than a negotiated Brexit would be worse for the UK. And while there is a mechanism for extension, it requires unanimous approval of the 27 remaining states. The UK is so widely disliked in the EU that no one expects an extension to be granted.

And here is a partial list of other problems the UK faces:

Lack of adequate staffing to man the Brexit talks thanks to years of budget-cutting. Where can they possibly find more bodies to handle bi-lateral trade talks in parallel? The specialists at the big-ticket accounting an law firms are too narrow to be very good. Worse I am hearing private reports that extremely experienced experts cross-European law who’ve put out feelers regarding Brexit gigs have been ignored…and were quickly snapped up by the EU side.

Near-impossiblity of getting any new trade deal in place in two years1. And contrary to what the press keeps saying, there is no default to the WTO. That has to be negotiated like any other trade and services deal. The WTO has said it will not give the UK priority.

Risk that the EU will bar the UK from undertaking other trade talks before it has completed its exit. By treaty, the UK cannot negotiate other trade pacts until it is out of the EU. The EU has incentives to enforce this rule. Does it have the means?

Certain damage to important UK export sectors. European countries would love to take a piece out of the City. The ECB already tried to get Euroclearing moved to the Eurozone. The only thing that prevented that was an ECJ ruling that said the ECB could not discriminate against a member of the EU> France has already started making rules to expedite getting Euroclearing on the Continent. UK banks continue to announce plans to relocate staff to Europe, and every bank of any size is scouting for office space Another important export business for the UK is aircraft parts manufacture for Airbus. All that activity will be migrated to European parts-makers once Brexit has commenced.

Theresa May has been grasping at the straw of an offer by Donald Trump to give priority to a US-UK bilateral trade deal. But just because The Donald gets on with Boris Johnson and Nigel Farage does not mean that a pact with the US will be a salvation for the UK.

Trump has put the US on a mercantilist footing. The UK is an exporter to the US. The US is bigger than the UK. On top of that, the UK is desperate and under time pressure. Either one puts a negotiator in a weaker position; the two in combination are deadly. This chart from the Financial Times shows the UK’s balance of trade and services with its major trading partners: 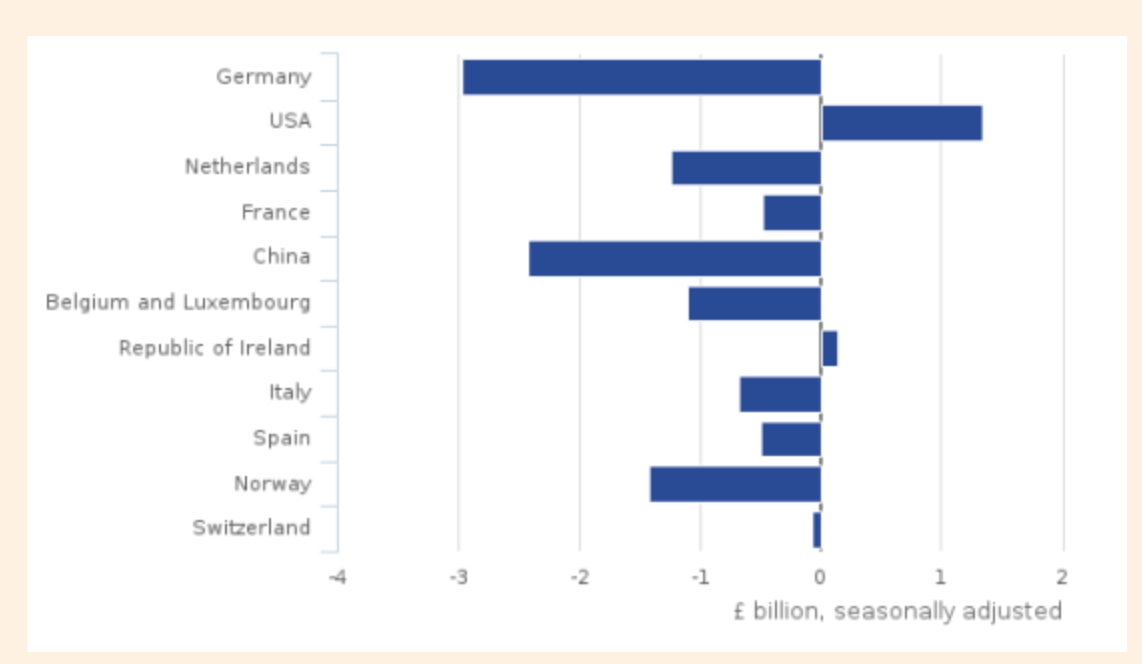 That alone points to high odds of an unhappy ending to the UK’s “US as savior” fairy tale. And when you get more granular, it does not look any better. Here are the major export sectors with the US:

Financial services. Do you think an Administration chock full of ex-Goldmanites will give UK financial firms any quarter? Mind you, the US is willing to chat about some City-friendly ideas, but it’s unlikely they’ll go anywhere. Again from the Financial Times story:

Apparently a system such as “passporting” — the automatic mutual recognition by which EU financial institutions have access to each member country’s market — is under consideration for a UK-US trade deal. But the recognition of regulatory systems across the Atlantic was a big stumbling block in the Transatlantic Trade and Investment Partnership talks between the US and the EU. (The key sentence from the public statement of US objectives: “we will continue to ensure that our government retains full discretion to regulate the financial sector”.)

Transportation. Trump has made getting auto company jobs back into the US a big priority, since they are highly visible and historically were the anchor of manufacturing wages generally. Moreover, the demands of just-in-time manufacturing means that at least some parts suppliers find that it behooves them to have operations within reasonable proximity of the final assembly plant. So he has every reason to play hardball here.

Similarly, there’s no reason to think Team Trump will look kindly on the idea of having UK suppliers to Airbus try to displace US suppliers to Boeing. Their only hope would be to shoulder aside any fabricators in Mexico, again assuming Trump doesn’t try to force that production across the border.

Pharmaceuticals. Although the US is an overly-zealous defender of intellectual property, and hence drugs under patent, Trump has started making noise about pressuring drug companies on prices. If he actually follows through, it’s not hard to think he’ll go after foreign firms first. So all Trump’s friendship may mean is Novartis, Roche and Sanofi will have the screws put on them before Glaxo.

And any deal with the US will entail the UK making concession. For instance, the Financial Times points out the risks to now-protected UK sectors. For instance, Australia, an agricultural powerhouse, learned in a 2004 bi-lateral trade agreement how zealous the US is zealous about promoting its Big Ag:

Australia made some unpopular concessions, including changes to its public drugs purchasing scheme at the behest of the US pharmaceutical industry, and received little in return. The country’s famed beef and dairy exporters achieved only a little more access to America’s protected agricultural markets, and its super-competitive sugar farmers essentially none. Studies tend to show the deal at best diverted rather than created trade, and has been of little benefit to Australia’s economy.

The UK risks the same thing. There are several agricultural sectors including beef and poultry in which UK farmers are currently protected by high EU tariffs, which the US will undoubtedly ask to be cut. Mrs May’s political opponents have also wised up to Washington’s likely demands to relax EU-mandated hygiene rules, including restrictions on chicken meat cleaned with chlorinated water, beef fed with growth hormone and crops grown with genetically-modified organisms.

There is more at stake, though, than the squeamishness of British consumers. If the UK accedes to the US’s demands on food rules, its farmers will find it harder to sell into the EU market, currently their largest single customer, unless they expensively adhere to multiple standards of production. This clash of regulations shows that the prize for the US is not just access to the UK’s market, but establishing precedents for talks with other large economies.

Reread the last sentence from the quote. The US has many good reasons to take advantage of a particularly vulnerable UK. No wonder Trump is so keen to have the UK walk into a trap and even worse, be grateful whatever they get. Politically and practically, any agreement with the US would be better than none.
___

1 Some Brexit boosters cite the 2004 bilateral trade deal between Australia and the US that was completed in less than a year as proof that trade deals can be completed quickly. While it is true that a pure trade deal, as in one involving only physical goods, could be completed in less than two years, pacts that involve services to any meaningful degree take much longer. Given that financial services is the UK’s biggest export to the US, it’s hard to think it would be completely quickly. Moreover, it’s almost certain that the pressure to wrap up the agreement quickly came from the Australian side, since Australia was one of the few to join the Iraq Was “coalition of the willing” despite 94% opposition to the war among the Australian public, an unheard-of level in polls. Prime Minister John Howard no doubt felt the need to show some benefits of being loyal to the US. But as the story of the results of the negotiations shows, even with the US in theory needing to reward Australia for its service, they didn’t come out very well from the deal.