HYGIENE RITUALS Watch: How convenient it is to use hand sanitisers (and how ineffective) Scroll.In (J-LS). My former attorney, who is a biomedical engineer by training and did her first work at the NIH, long ago said if these hand sanitizers did what they said they did, they’d need to be regulated as drugs. Which begs the question as to why the FDA let these big consumer product companies make medical claims when they go hard after dietary supplement companies that do that.

The US in Sri Lanka: -when does ‘Aid’ become Espionage? Defend Democracy

Theresa May to fast-track Brexit bill following court defeat Financial Times. “Opposition to Brexit at Westminster has crumbled in recent months and most Labour MPs are expected to follow the edict of their leader Jeremy Corbyn who says the party must not be seen as trying to thwart the referendum Leave vote.”

On one hand, getting UK less dependent on financial services is good. On the other hand, to do it over in effect 18 months is idiocy.

Given that Tories are never going to look at MMT (Labour continues to be inelectable) and that my (I believe conservative) estimate means that every bank moving out will cost the Treasury upwards of 1.5bln pounds in revenues, we’re talking a significant hit to UK’s finances as early as 2018, with the likely repercussions of “retrenching” and similar.

Some in mid England may not lament the demise of “fat cat bankers”, but when 10s of thousands UK affluent taxpayers are picked up and made leave on a short timescale, it will have nationwide impact (including likely tanking of London and surround real estate market, which will have impact on the UK domestic banks too…). Such short-term semi-forced emigration of large, well paid, skilled group of people is something I’d struggle to find an equivalent of (mass force emigration yes, even skilled, but usually young, not settled and not so well paid) in peace time, and the consequences are unpredictable both London-wise and nationally.

For example, someone running B&B in Yorkshire Dales, Cotswolds or Somerset may find that their Home Counties clientele left overnight, because it’s now for them easier to pick a fast train/drive on motorway to a French/Italian/Spanish beach than to fly and drive there (not to mention better weather).

Kellyanne Conway Allegedly Punched a Guy at an Inaugural Ball Vice (Dr. Kevin). Buries that she threw the punch to break up a fight. But still not a good look.

EXCLUSIVE: Trump team compiles infrastructure priority list McClatchy (martha r). This indicates half the money will come from the government. That may just be loan guarantees, since heretofore the noises have been about minimizing fiscal impact. But if it is actual spending, this would be a lot of stimulus.

Mnuchin Backs Fed Independence and Signals Reform Isn’t Priority Bloomberg. The House will almost certainly pass Audit the Fed, and the Senate may. I don’t see how Trump could veto that without really alienating his base. So if the Administration (as opposed to just Mnuchin) is against this, how do they kill this in the Senate?

For a few hours, Badlands National Park was bad to the bone in defiance of Trump Washington Post (martha r). They were forced to delete their offending tweets. I should have screenshot some of them but went to embed one I’d read earlier and now it’s gone.

Four more journalists get felony charges after covering inauguration unrest Guardian (Userfriendly). Bear in mind that this was a DC police matter, not an action of the new Administration. However, this is consistent with something we’ve warned about: a majority of people who use guns as part of their line of work are Trump supporters.

USDA Scientists Have Been Put On Lockdown Under Trump BuzzFeed (José, Userfriendly)

Trump’s Road to the White House Frontline. UserFriendly: “I generally hate Luntz for his ability make horrible things sound like a good idea, but he really does get a good understanding of how and why people vote the way they do.​”

An anthropologist announces the death of liberalism Fabius Maximus (resilc)

Minnesota Reveals a Possible Obamacare Replacement attn:. Userfriendly: “Dayton, who just announced he has cancer, is actually pushing for a public option.​”

Why is work making us miserable? Lucy Kellaway, Financial Times. I am a Kellaway fan, but she misses the elephant in the room. Short job tenures and a weak labor market make ordinary workers more insecure. And much greater connectivity and the resulting compression of work cycles means many workers have no real separation of their personal life from their work life. Work comes first or else.

Broad Strokes Dirk Hayhurst. Voislav: “Dirk Hayhurst is a former MLB pitcher and current analyst and broadcaster. He offers his view on the recent election and divisions in the American society. He is a very interesting read as he has a very folksy approach.”

Meet the leader of a billionaires’ club determined to stop Trump from destroying the world Quartz (Joe H). As long as they are discussing these issues on a yacht, and not in Detroit or Flint or Youngstown and seeing how the locals live and (gah) eating the local food, it’s hard to see them as serious.

Antidote du jour. This is the “big Siamese” of Alan T’s daughter Jessica. Look at the non-breed-standard white toes! Plus great fashion sense and ‘tude. 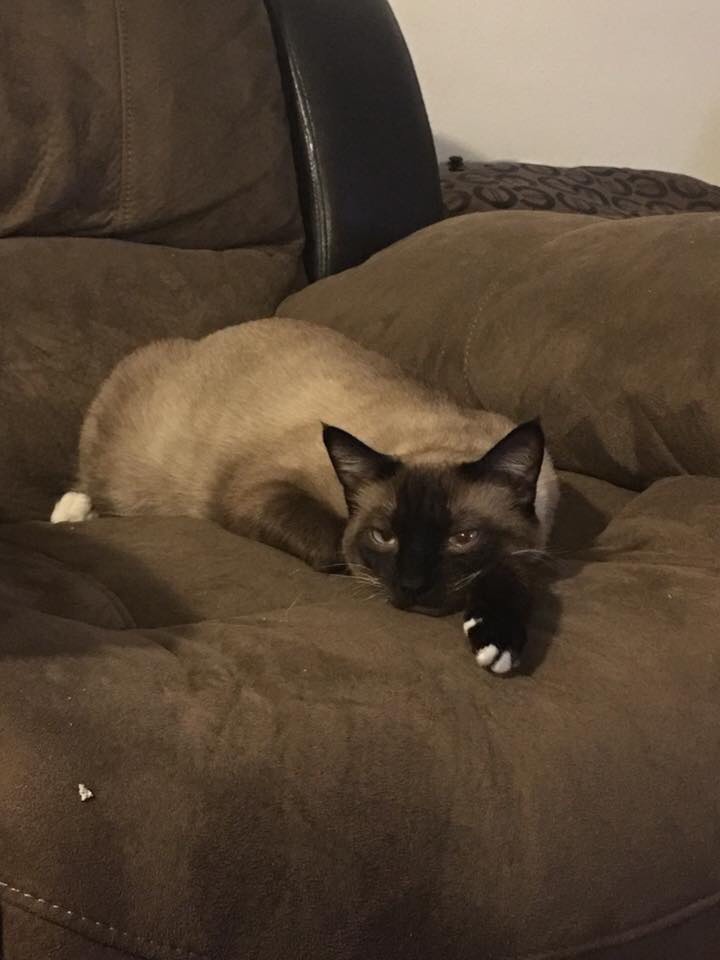